It was such a relief when I was back in London after staying 2 days extra in Paris. I don’t really know how to express it, but the feeling of being in London is much better, and safer. 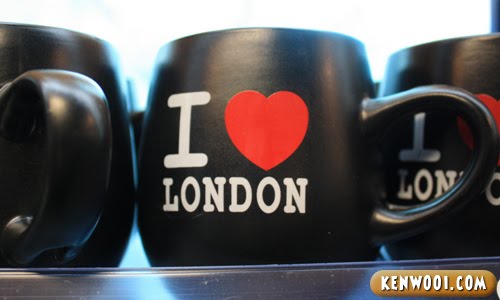 Well, there’s no special feeling for London but I’d definitely say it’s a nice place to be.

The colour Red is a well-known symbol of England, and wherever you go, chances of seeing red coloured telephone booths, post boxes and buses are high. 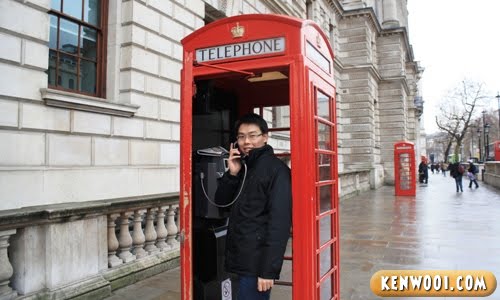 My first destination in London was the Natural History Museum. 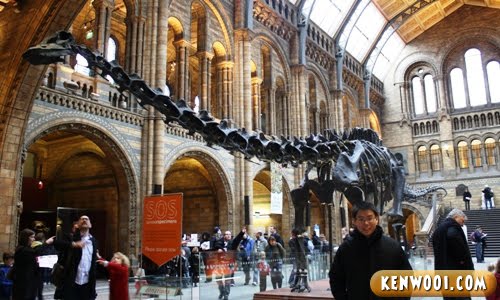 When I first laid my eyes on this dinosaur skeleton, I went “Wow!”. It’s just amazing! Hey, I’ve never seen a real one in my whole life, till that day!

The museum compromises lots of collections and, unsurprisingly, it’s particularly famous for its exhibition of dinosaur skeletons. But I think the Human Biology exhibition is more interesting, especially this one…

Cool, NOW I know how making babies is done! It’s very… sophisticated you know. Never thought it’s this way – all along I thought kissing produces babies! *Knowledge level up!*

But I wonder why the man’s internal body is so rotten and grey compared to the woman’s one. Hmm…

The Palace of Westminster, also known as Houses of Parliament, is along River Thames. It’s where Big Ben is. 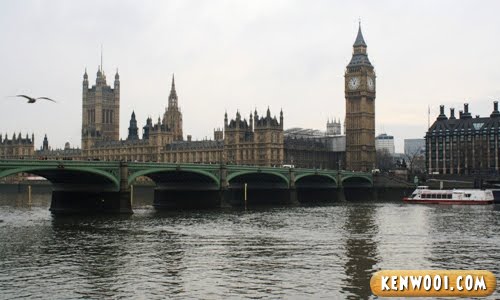 Big Ben is the largest four-faced clock and it’s one of the tallest free-standing clock towers in the world. It’s located just opposite Westminster station.

Across the Westminster Bridge, the magnificent London Eye can be seen. 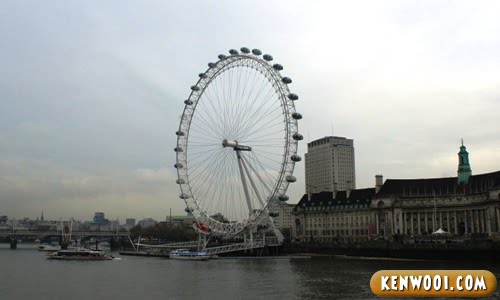 It’s the largest Ferris wheel in Europe, and one of the popular paid tourist attractions in the United Kingdom. I didn’t take the ride though, due to time constraint and budget limitation. Oh yeah, did you know Malaysian cyclist Josiah Ng proposed to Kim Ong using the London Eye? Sweet!

Down the river, another iconic symbol of London is located – the Tower Bridge. 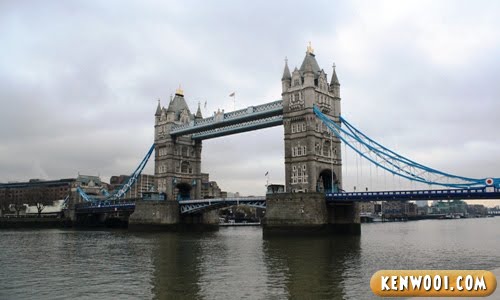 Tower Bridge is usually mistakenly referred to as the London Bridge, which is actually another bridge nearby. Somehow this bridge is strongly related to the nursery rhyme song called “London Bridge Is Falling Down”.

I wonder why is there a kid’s song about destroying Tower (London) Bridge and building it again. It’s like teaching them to be a terrorist-cum-architect huh?

Anyway, it’s not a surprise to see a Chinatown in London, which is located near Leicester Square station. 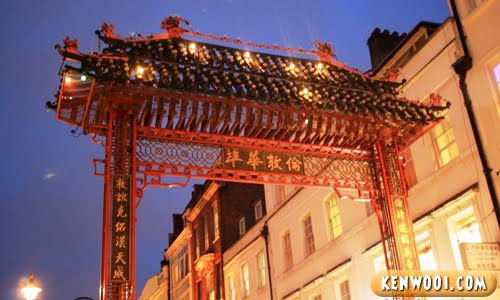 With many Asians currently living in the city, all they hope for is a taste of their own hometown. On an unrelated note, somehow I think Asian food is more unique than Western food. 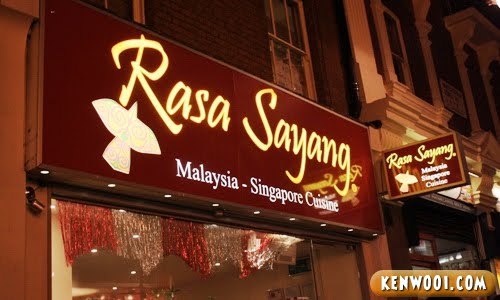 Next up, the Millennium Dome, or simply known as The Porcupine Dome. 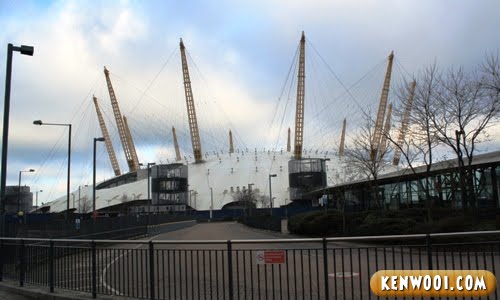 And did you know that there’s a football academy called The David Beckham Academy? I didn’t know that till I saw it. 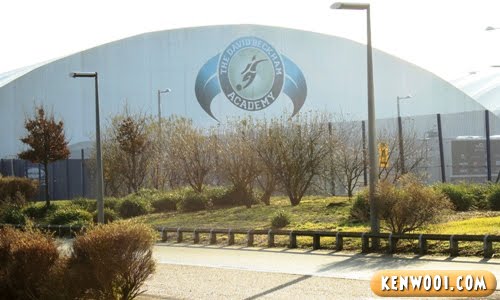 I guess Beckham is really dedicated in football, or he has too much money to spare.

Greenwich Park is a former hunting park in Greenwich and one of the largest single green spaces in London. 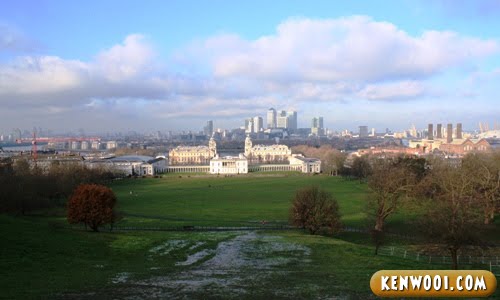 At the top of the hill where the Royal Observatory is located, you’ll be able to see a panorama view of the city. 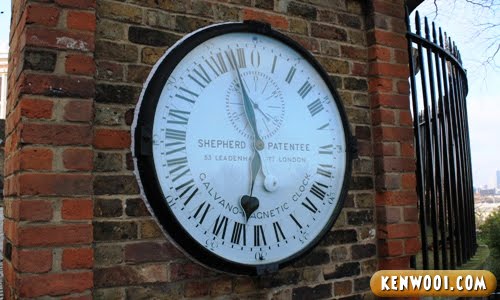 Mounted on the wall just outside the observatory, there is a clock called the Shepherd Gate Clock. This unusual 24-hour analog clock displays the Greenwich Mean Time.

Anyway, it’s a norm for people to bring their dogs out to parks. But when the dog poops, it’s better to clean it up, or else a fine will be imposed. 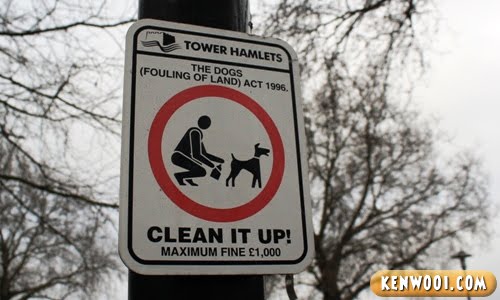 Unlike in Malaysia, if your dog poops in front of a house while you’re walking with it, you’ll quickly evacuate from the scene as soon as possible! *Run doggie, run!*

Trafalgar Square was also one of my destinations in London. 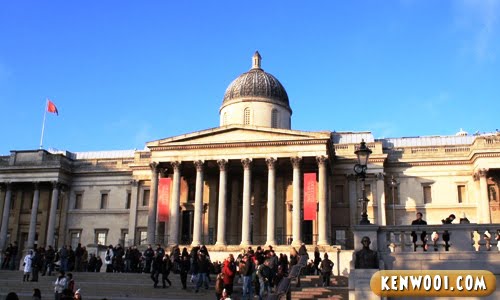 The place consists of a large central area surrounded by roads and stairs leading to the National Gallery. At the center of the square, the Nelson’s Column was erected. 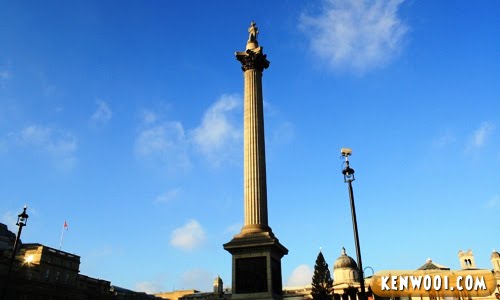 It’s surrounded by fountains and four huge bronze lions sculptures. As a Leo boy, I have this tiny affection for lions, so I was quick to take a photo with one of the lions. 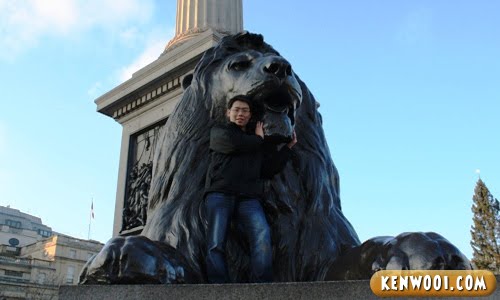 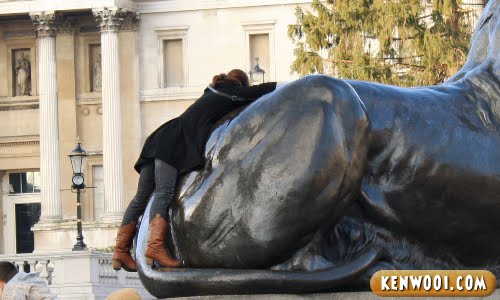 Next up, Buckingham Palace. Originally known as Buckingham House, it’s the official London residence of the British royal family. 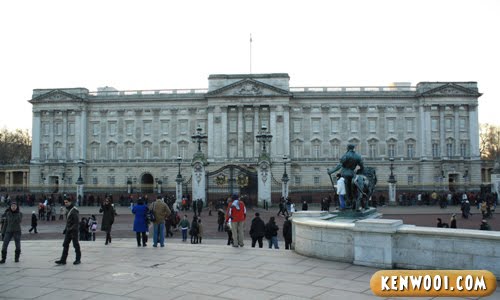 It’s famous for the standing-still guards with funny-tall-hat that won’t move when you disturb them. However, I only saw 2 guards and they were inside the compound. Maybe it’s because of Winter – standing still out in the cold is crazy.

Also, the Changing of the Guard ceremony is a tourist attraction, but unfortunately I didn’t get to witness it.

Placed outside the main gates is the Victoria Memorial, a large memorial statue of Queen Victoria. 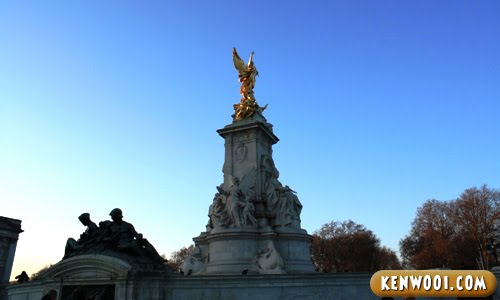 And here’s the royal family of England, taken at Madame Tussauds. 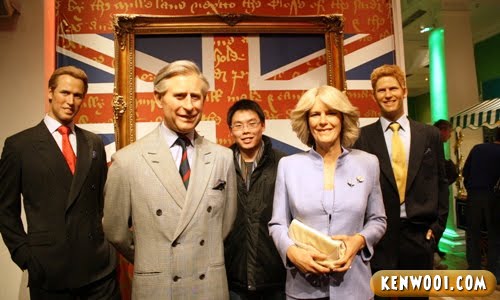 Wait a minute, how come there are 3 princes? Prince Charles you naughty boy – you must have hooked up with an Asian lady and got yourself an Asian-looking prince too right?

Although the 3rd prince looks like Asian, Prince Ken is as handsome as Prince William and Prince Henry what. Right?

Okay craps aside, Madame Tussauds is actually a wax museum. So you get the point. I managed to take interesting photos with the waxed celebrities, but more on that on an individual entry. =)

So that’s roughly some the places of attractions I’ve been to during my stay in London.

The transportation services in London are pretty well-planned. To get around the city, I used mainly the Underground Tube service. It consists of several lines and it’s important to observe the signboards to the right line. 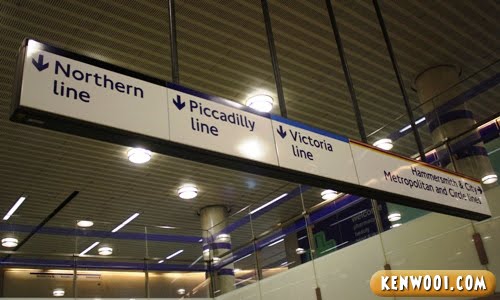 And you definitely need a tube map too. It can be obtained at every tube stations for free. 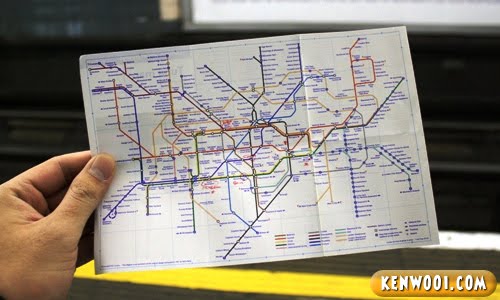 Alternatively, the bus service can be used too. 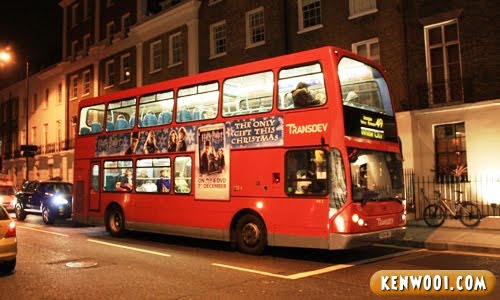 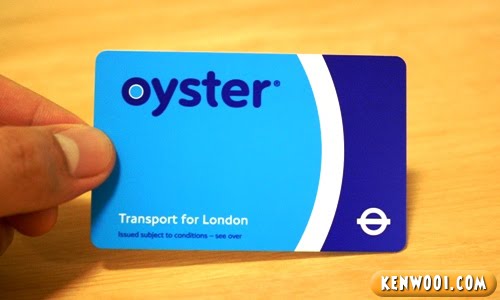 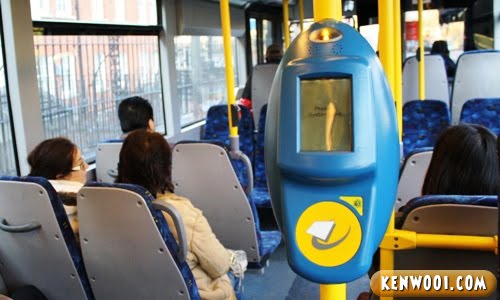 The Oyster’s “swiper” on a bus.

But when comparing the Oyster Card’s benefits against Touch n’ Go, Oyster wins it all. Oyster Card offers cheaper rates and daily price cap, which is equivalent to the cost of a One-Day Pass. Touch n’ Go on the other hand, doesn’t give cheaper rates. You just literally touch, and go.

Besides tube trains and buses, you can always take a Black Taxi Cab to go directly to your destinations. 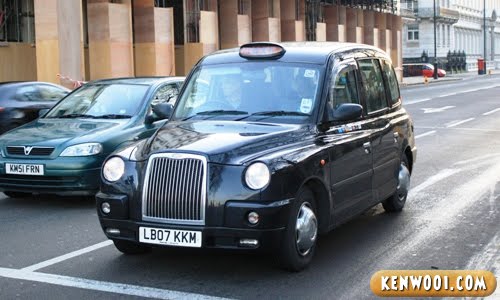 I’m not sure about the rates though, but it should be more expensive.

London was fun to be honest, minus the cold weather. Everything is organized and the signs are pretty clear. It’s simple to get to places as long as you’re prepared.

Anyway, here’s something amusing I saw on the road. Okay, if Malaysians were to see a car with “L” label on it, honks are surely gonna happen. Typical road bully. 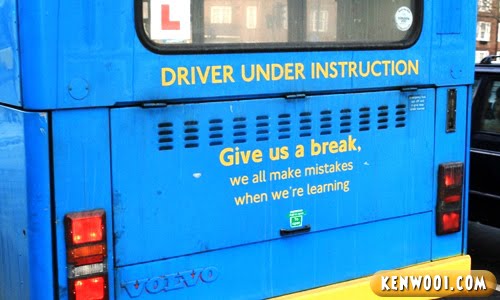 But here in UK, give them a break alright! =)

126 thoughts on “Welcome To London”