The Eiffel Tower is one of the world’s most recognizable monuments and probably the best-known monument in Europe, or the whole world. 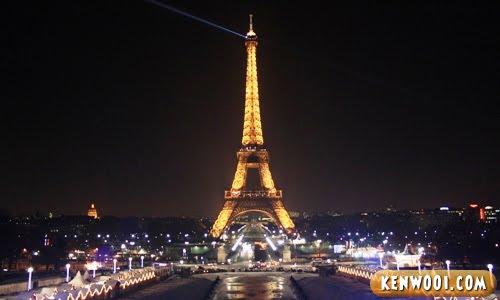 When viewed from the Trocadero Metro station, the best view of the structure can be seen. And to get to the tower, you can either walk towards it by crossing the bridge, or take the Metro to Bir Hakeim station and walk.

Either way, you gotta walk. 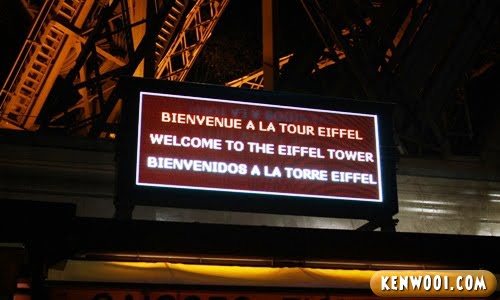 Anyway, I went there on 3 separate occasions. Why so many times? You’ll know later on.

It was said that no journey to Paris is complete without a journey to the top of the tower, and unfortunately on the 1st occasion, the top floor was closed. Thanks to the bad weather. 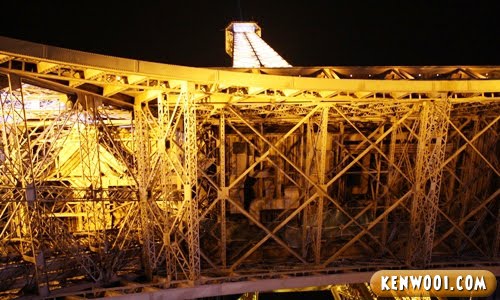 So close, yet so far! 324m far to be exact. So, the only thing to do was to stare from the ground and take pictures.

On the 2nd occasion, which was during the day, I visited the tower again. 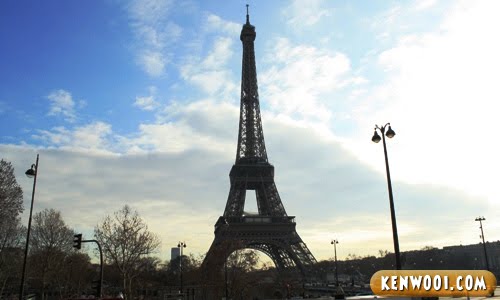 The day scenery of the tower is as magnificent as the night view, just without the lights. 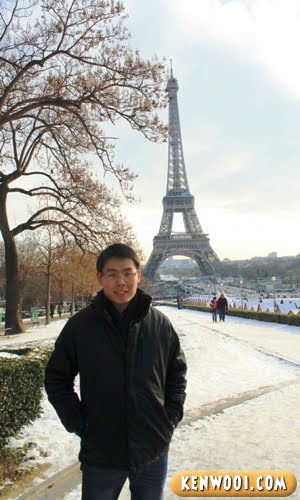 This time, I’ve decided to walk towards the tower. Despite the cold, the walk was just fun and amazing.

Since it was day time and the weather was rather better than the previous night, I was hoping that the top floor is open for visitation. But again, it was closed. 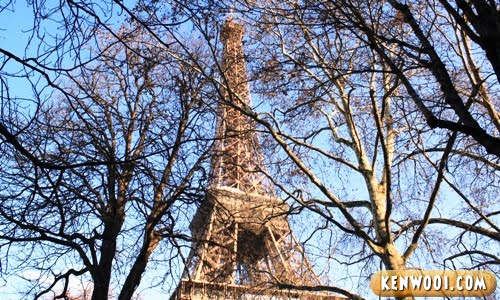 So I took photos, again.

It has been 2 attempts but hopes of going up came crashing down because of the weather. I thought I’m gonna leave Paris without hitting the tip of that erection. However, Eurostar’s service disruption resulted in staying extra 2 days in Paris and that’s when the 3rd occasion happened.

On the extra night in Paris, Eiffel Tower was the destination again. And fortunately, the top floor was opened! Woohoo! Thank you Eurostar for having problems and thank you snow for giving Eurostar problems! 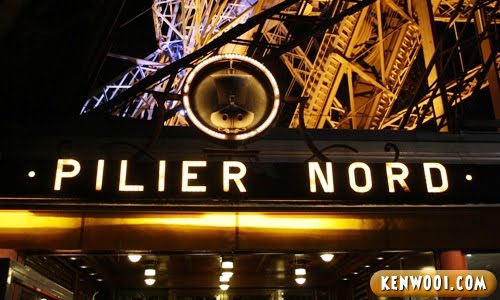 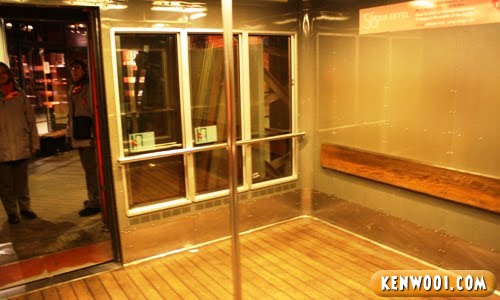 Slanting lift transports visitors from the ground floor to the 1st and 2nd floor, and then vertical lift to the 3rd floor. One elevator can fit about 30 adults I think.

The journey to the top was fun, especially when the view of the city can be gradually seen and the air becomes colder.

The elevator brings people to an an indoor viewing area but viewing the city from the open-air upper floor is definitely better! 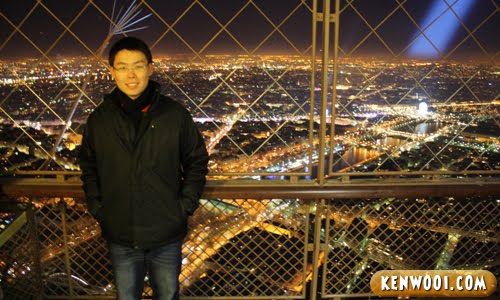 The open-air area was surrounded with high fence though, probably to prevent couples from saying “You Jump, I Jump”.

Anyway, here are some pictures of the cityscape during the night. 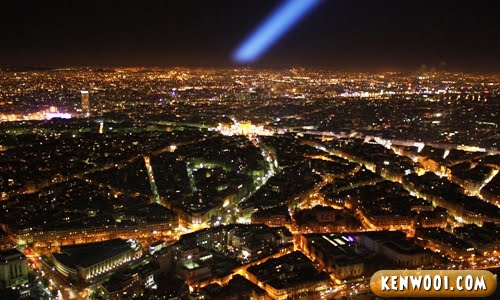 The Arc de Triomphe is pretty obvious in this picture. 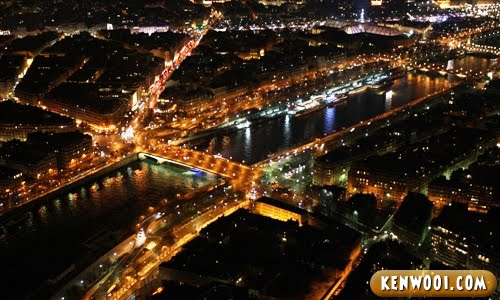 The Seina river with some bridges. 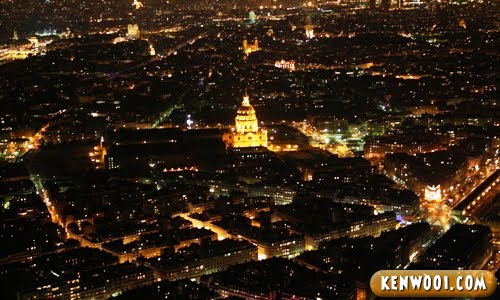 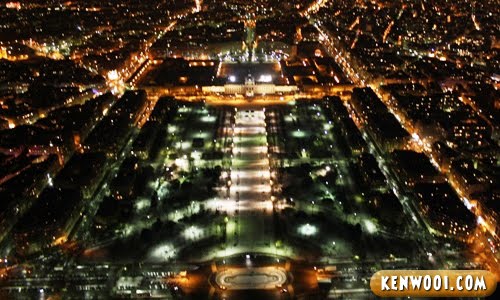 This is the park, called Champ de Mars, located just beside Eiffel Tower. It’s also another good place to take pictures of the tower but I didn’t really walk there since it was freezing cold. 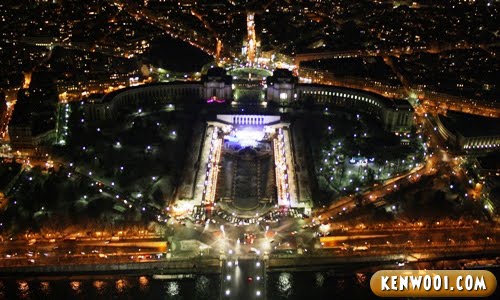 And on the opposite side is the Trocadero area, just across the river.

To sum up the journey, it was pretty breathtaking. Also, at certain time period, there’ll be light performances by the tower. 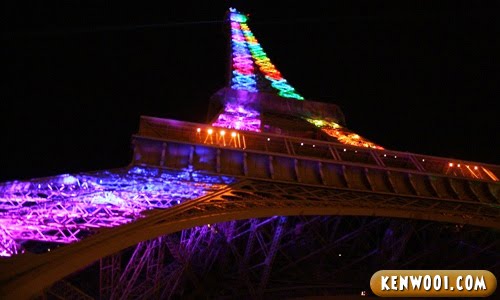 The tower will turn into a colour-changing structure for about 10 minutes or so, and it’s accompanied by some musical song as well.

Anyway, visiting this attraction isn’t that pleasant when it comes to the “souvenir guys” selling Eiffel Tower stuffs such as key chains and mini monuments. I bumped into many – all moving around trying to sell souvenirs to visitors. 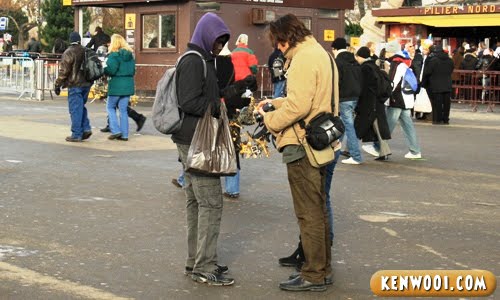 Although I think Paris isn’t that lovely and romantic, the visit to the top of Eiffel Tower was the closes to that feeling. 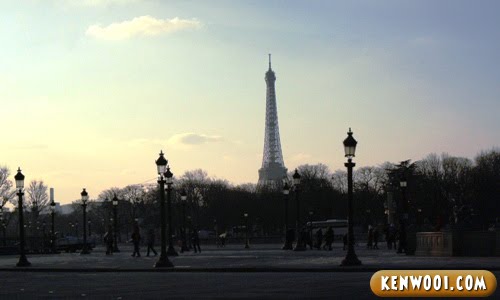 Hopefully one day, I will visit Paris again. But definitely during the Summer! =)