When I was on my trip to Europe back in December 2009, I knew I was bound to see snow – like finally! Hey, it was Winter season at that time! Woohoo! 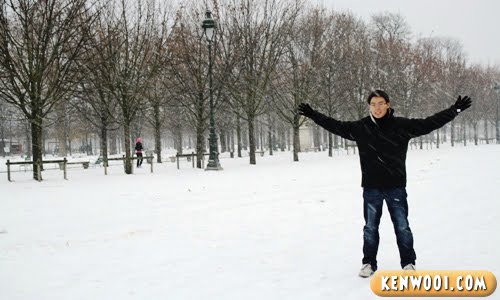 The first time I witness snow was on the 2nd day of my Paris trip. Woke up in the morning and snow was “raining” down from the sky!

Just look at the car – it’s totally covered with snow! So cool! 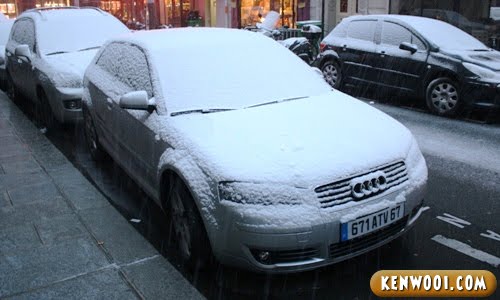 And I can’t resist myself from doing something cool as well! 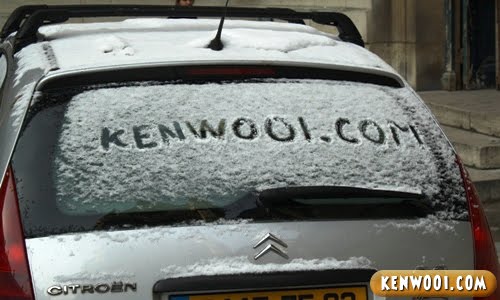 Yeah, engraving kenwooi.com on the rear windshield of a car!

So, snow appeared on the day we were heading to Disneyland Paris.

As we were taking the train to the destination, we saw all the buildings and structures were covered with white beautiful snow. 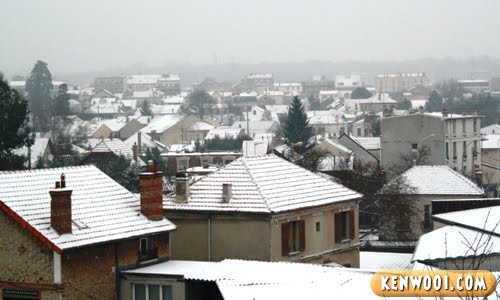 Despite the heavy snow on that day, Disneyland wasn’t short of visitors. Everyone, especially the kids, were so excited and they got even more excited due to the snow. 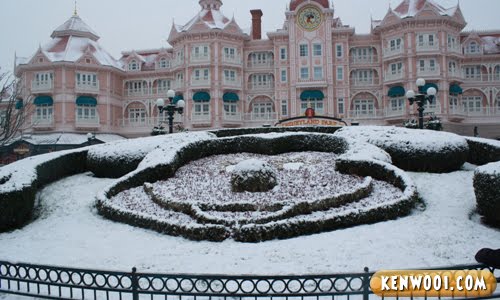 Even though my friends and I weren’t little kids anymore, I guess some of us are still a kid at heart. 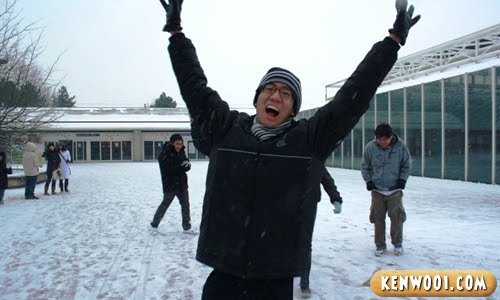 Just look at how excited Jonathan de Vinci is. 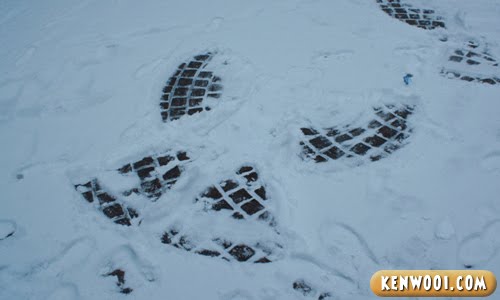 We even made shapes of angels on the snowy floor. 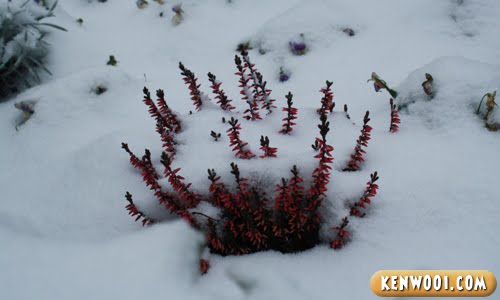 Some beautiful-looking plant still alive although covered with chilling cold snow. I guess the plants are already used to the weather.

Oh by the way, do you know the originally shape of the snow? All along I thought snow are tiny smashed-up balls – but have a look at this… 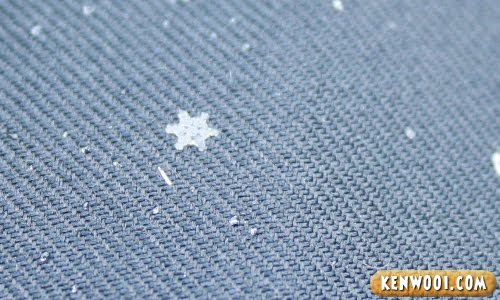 A real snowflake! However, it’s quite rare probably because it deformed before reaching the land.

Anyway, being there at Disneyland with the presence of the snow was certainly something to remember. As the day started to darken, the snow became heavier. 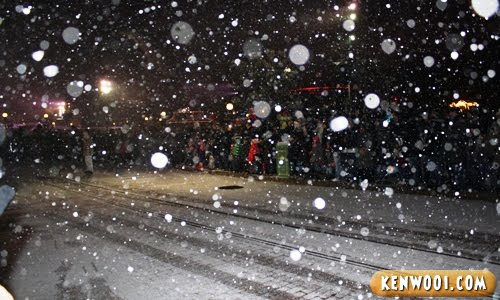 Too heavy that the 2nd Disney Parade was canceled. Oh well.

Nevertheless, the day was undoubtedly filled with fun and enjoyment! 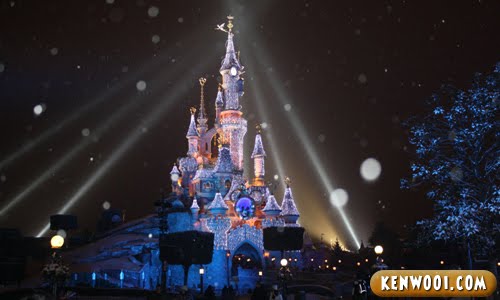 It was my first Disneyland visit, and I’m glad that snow came along as well. =)

Anyway, this was taken at the Jardin Des Tuileries garden right in front of Lourve Museum. 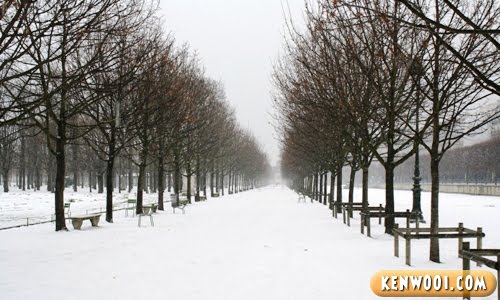 Looks really amazing, somehow you wish to be there right? But when you’re really there – you’ll wish that the snow is gone! I’m serious! It can be pretty annoying at times.

Back at home in Leeds, here’s the view of the snow right outside the window. 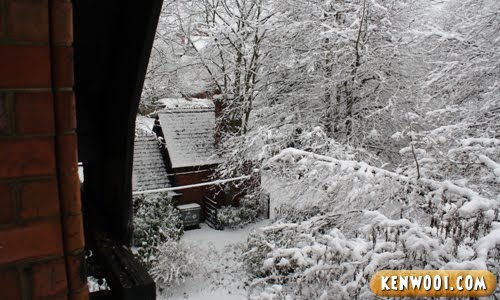 To me, it’s really an amazing view. So white and pure. Even every branches were covered with thick snow. 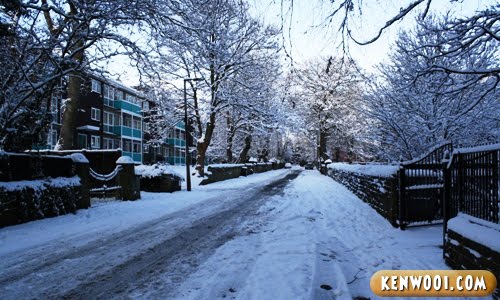 The road right outside the house. 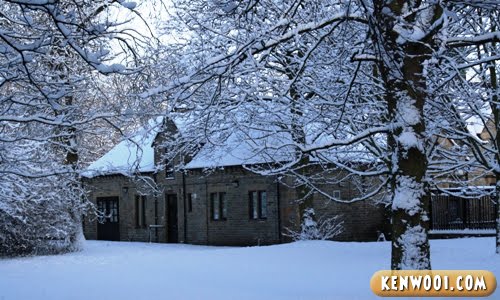 While being in such a weather, it’s important to have proper thick clothing. But for the animals, the pigeons for instance, they don’t have cloths to wear. 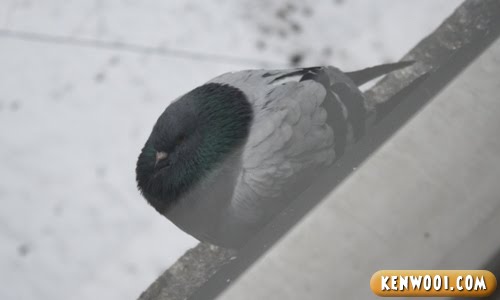 So they puffed their feathers. Making them look like fatty birdies! Cute right? That pigeon was resting outside the window while the picture was taken.

Also, with so much snow covering the surface of the ground and walkways, it’s even harder to walk without proper snow boots! 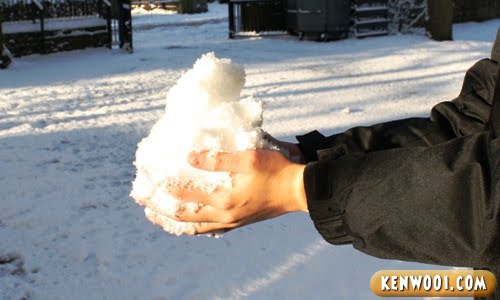 Just look at the amount of ice I scooped from the ground. If ice-kacang entrepreneurs were to start their ice-kacang business here, I bet they can make the dessert anywhere, anytime!

P/S: My hands were so damn cold (and it hurts for a while) after letting go of the ice! =/

Oh yeah, some might wonder whether did I build a huge snowman or not – since there is plenty of snow to play with. To be honest, nope! 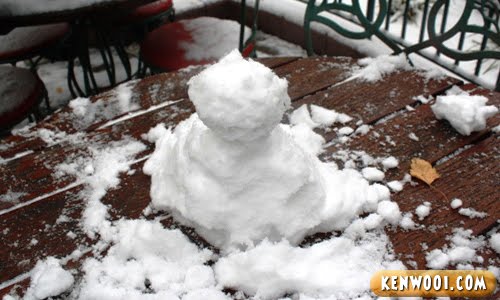 But a small tiny snowman on a table got lah.

And since it’s so freezing cold outside, it’s like a open-air fridge over there. Going out and facing the cold isn’t always an interesting thing to do.

But for some of the locals here, they do this in the cold… 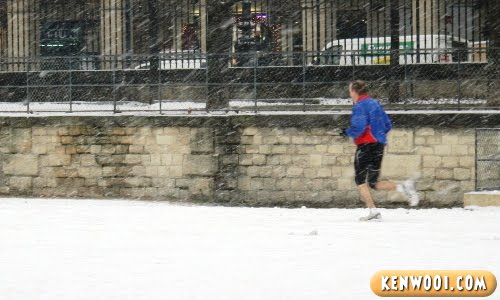 101 thoughts on “Embracing The Snow”