Besides visiting Manchester United’s Old Trafford while I was in UK, I also visited Liverpool’s Anfield Stadium. 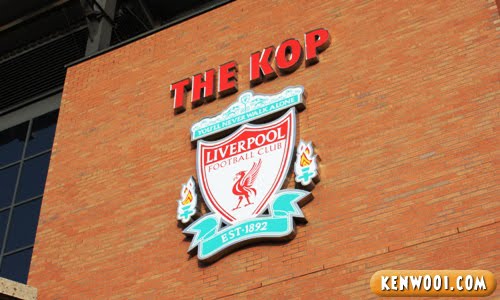 Before that, take note that visiting Anfield doesn’t mean I’m a fan. In fact, Manchester United is still number one for me!

Therefore, this entry goes to everyone who is a Liverpool Football Club fan. Today kenwooi.com will bring you on another tour at Anfield Stadium. So sit back and wish Liverpool all the best next season. 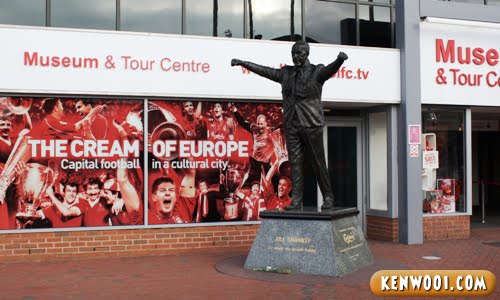 As you enter the vicinity of the stadium, you’ll see a statue of Bill Shankly. He’s a legendary individual (former manager I think) here and it’s said that he makes the people happy. 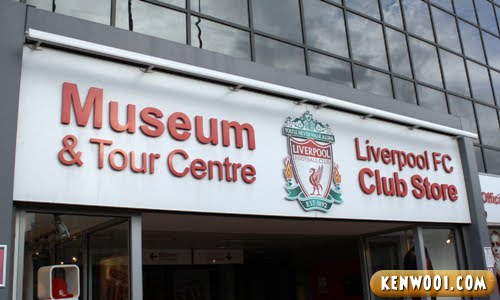 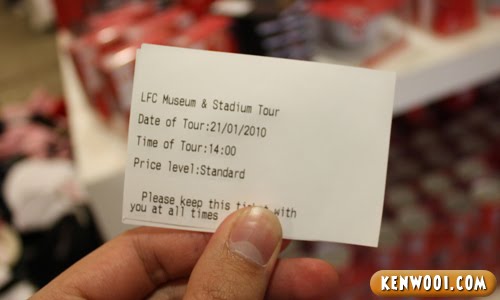 Unlike the cool “tag” given when you buy the tour and museum ticket at Old Trafford, you get a piece of paper instead. Thrifty eh?

Anyway, since it wasn’t time for the stadium tour yet, I went to the Club Store to have a look around. They have interesting souvenirs like Monopoly Liverpool FC Edition. 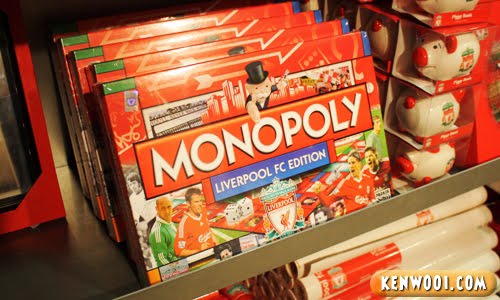 I wonder what will be bought and sold in his edition. Gerrard’s boots and Torres’ hairband?

Besides that, they have cosmetics as well. 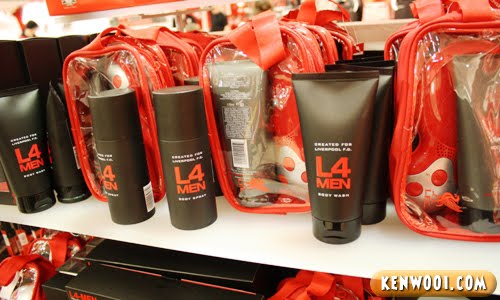 L4Men. Sounds like a facial foam that can make you as handsome as Benitez. Maybe lah.

After that I went to the museum as well. 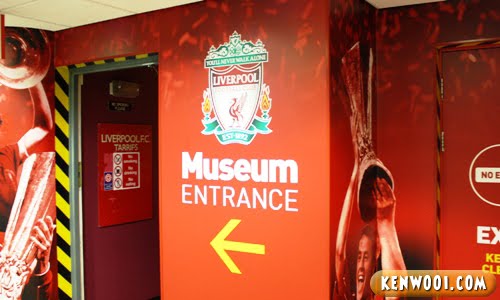 Well, I don’t find anything interesting to talk about in the museum. Maybe only Liverpool fans will be fascinated by the exhibition. 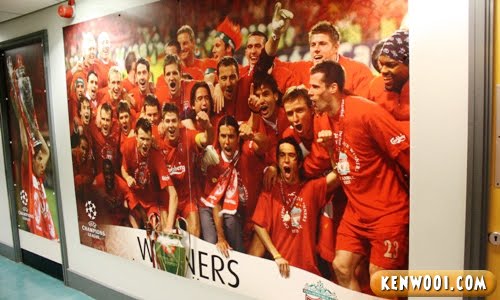 But I find this poster interesting. Winners? Well, not quite anymore I guess.

After waiting for quite some time, the stadium tour began. 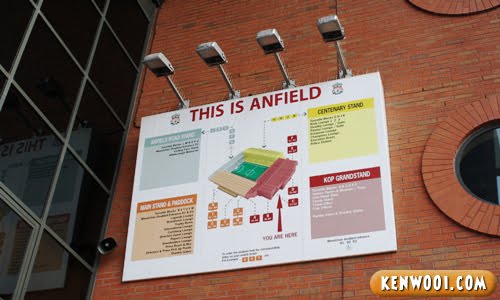 To be honest, Anfield is not as huge as Old Trafford. I went “Wahhhh!” when I saw Old Trafford for the very first time. Anfield, however, just an “Oh…”. 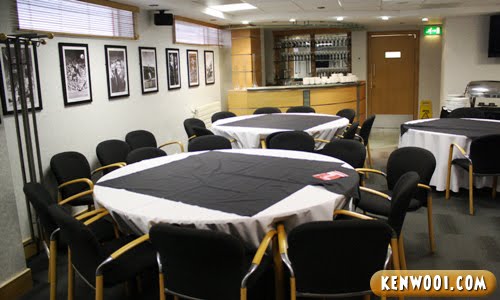 The first place we were brought to was the dinning room. This is where the players eat, obviously. 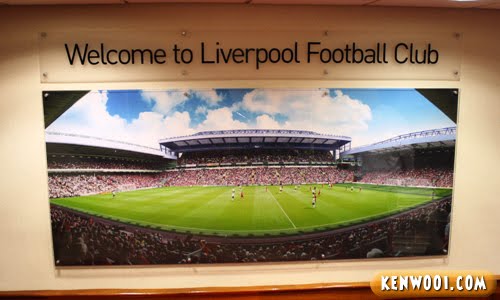 And yeah, welcome to Liverpool Football Club and this is Anfield. 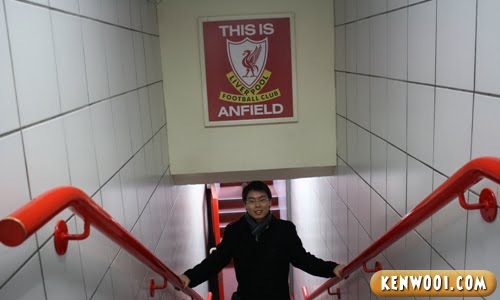 According to the tour guide, that “This is Anfield” poster is used to intimidate the opponent before they exit to the field. Michael Owen used to jump and hit it every time during matches. 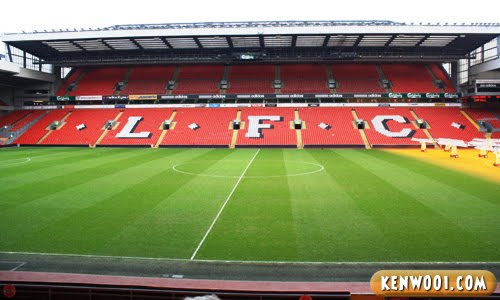 This is the pitch. From inside, the number of seats available here is definitively not as many as Old Trafford.

Then, the press conference room where we met some of the footballers and their future manager. Yeah, Liverpool players like Jamie Carragher, Steven Gerrard and Fernando Torres. 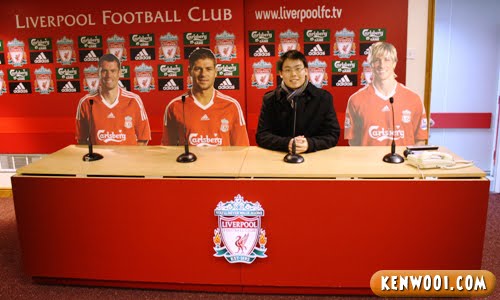 Hmm, why does their future manager look so familiar. Hmm…

Anyway, next we were shown the changing room. 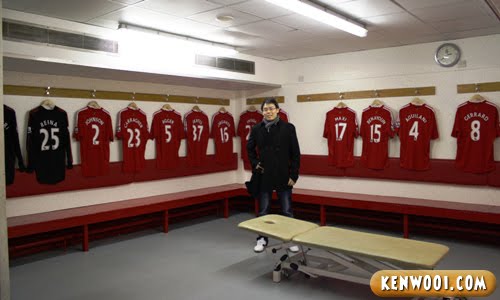 Display of jerseys as usual.

Other than those mentioned, we were shown the interview area and more of the pitch only. And that sums up the Anfield Stadium tour.

By the way, this gentleman was the guide during the tour. When I asked him for a photo together, he said “I’m not sure why you want a photo with me, but very well!”. 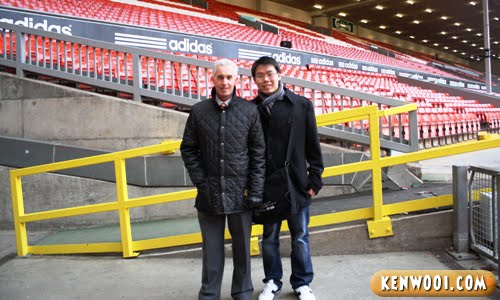 And I replied with just a smile. Aiya, I should have told him “Hey, it’s not anytime you can have a picture with Ken Wooi eh!”. Haha. =P

Anyway, hope you enjoyed the virtual tour even though it’s pretty short. I’m not a Liverpool fan, remember? =)