No funny stuff this time. Instead, it’s a personal rant regarding a recent contest organized by AirAsia on Twitter. 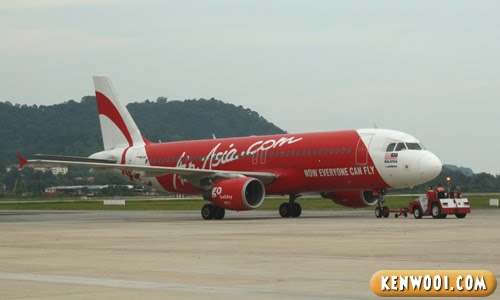 In August 2010, AirAsia organized a contest called “AirAsia Rocks Hadyai” and the requirement to win is…

Just tweet why you want a free flight to Hat Yai, together the following keywords. As easy as that.

And the prize for 50 winners…

Actually it’s not entirely free, winners and their guests will still need to pay for other taxes and fees.

But it’s so professionally written. Should have just written it like this…

Anyway, I decided to try my tiny luck and just tweeted once.

And as promised, the winners list was announced on September 3.

The amusing thing about this announcement is that it was tweeted just ONCE. Since I didn’t receive any Direct Message (DM) from them on Twitter, I assume they didn’t DM the 50 winners as well.

As we all know, if you’re not viewing your Twitter timeline when it was announced – you’ll definitely miss it right?

Without proper information (Direct Message in this case) to the winners, I guess AirAsia was hoping that some winners missed the tweet and totally forgot about it? Then they don’t have to give out all 50 x 2 free return flights. Smart move.

Fortunately for me, I was on Twitter, checked the link and saw my name! 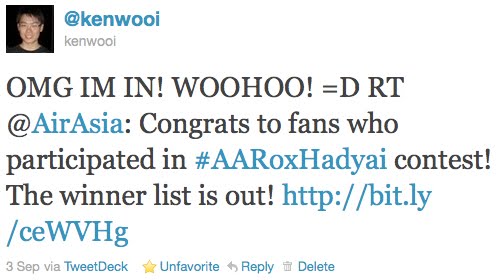 I felt so excited because never in my life I’d expect winning a flight. And I’m finally able to fulfill my wishes of visiting Hat Yai as well!

So on September 4, I sent the required email to them, stating the necessary details of my guest and I.

4 days later, on September 8, they replied with an email asking for more details and most importantly, the preferred travel dates.

Okay, I replied on September 10 and picked the last 3 days of the month (September), which is virtually the last dates to travel/redeem the prize.

But after that, there wasn’t any response from them anymore. So on September 20, I emailed them again.

Still no reply. How come? If the travel dates are not available, at least have the courtesy to inform me right?

Then I went on AirAsia’s Facebook page and commented on the contest thread, hoping for a confirmation.

One of the other winners replied me. No response from AirAsia Facebook team at all.

Then September went by without any news and confirmation from AirAsia. So I gave up and decided to forget about it.

But just recently, in October 2010, I got another email. 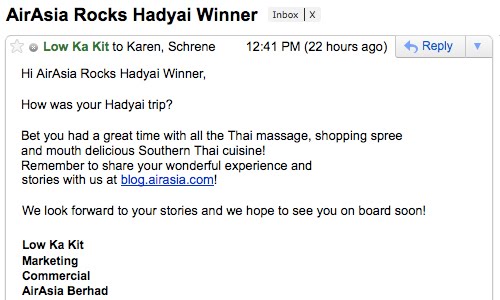 HOW WAS MY HAT YAI TRIP?!

This is absurd. They didn’t even confirm anything, no proper response, left me hanging without knowing whether I’m getting to fly or not and now asking me about a trip that didn’t even happen?

And so I replied…

Yes, I also have no idea what happened and I understand that there’s nothing else I can do, except to blog about it.

Anyway, I know the prize is not THAT expensive coz it only costs about RM200 (2 return flights). Some of you might even think I should just forget about it.

But hey, it’s a contest organized by AirAsia – known as the world’s best low-cost airline in 2009 and 2010! How can they grant someone a prize and do nothing about it? 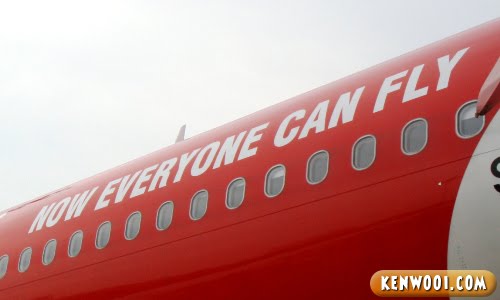 AirAsia, why organize such contest when your team can’t handle it properly and fulfill the winners’ prize? Where is your credibility?

Yes, everyone can fly – but not always right?