KUALA LUMPUR: Police may consider requesting for popular film maker and producer Yusry Abdul Halim to ascertain the authenticity of the sex video that showed a man resembling Datuk Seri Anwar Ibrahim having sex with a foreign prostitute.

On top of that, popular Malaysian blogger Ken Wooi was also asked to analyze the video.

For the uninitiated, Ken Wooi is well-known for his superb analytical and research skills.

Royal Malaysian Police Secretary confirmed that police called Ken to help analyze the video. The police will assist Ken in whatever help he needs.

“As far as we are concerned, we can call anyone to help in the investigation and that includes Ken Wooi”, said the Police Secretary yesterday. “In fact, we might even consult other popular film producers such as James Cameron, Steven Spielberg and Christopher Nolan on this issue”, he continued. 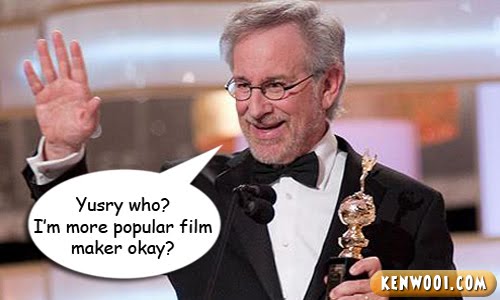 Ken Wooi, who blogs at kenwooi.com, was reported to have said that it’s easy to analyze a sex video. “Just enjoy the show and comment”, he mentioned.

Anwar has lodged a police report saying he is not the man in the sex video, claiming that size does matter.

After days of analyzing the video, Ken has finally decided to reveal his sex video analysis to the concerned public on his personal blog kenwooi.com.

Scene 1 analysis: This is the lady taking off her clothes, waiting to provide satisfaction. Big boobs and nice curves – just perfect for a sex video!

Scene 2 analysis: This is the bed. Too squeaky that it squeaks louder than the lady’s squeaks. Bad selection of bed and room. Should have installed sound absorber for better sound effect.

Scene 3 analysis: This is the suspect having sex with the lady. Doggie style isn’t appropriate for Malaysia, they should done it with the well-known 1Malaysia style.

What is 1Malaysia style? You gotta ask the pro – PM Datuk Seri Najib.

Scene 4 analysis: A better face view of the suspect. Looks like Anwar’s face but it could be superimposed. Wait, who cares about the man’s identity?! Just focus on the lady lah!

Why would anyone focus on the male when watching a sex video? That is so absurd!

Scene 5 analysis: The video ended with the suspect and lady sleeping on the bed. Bad ending. Another hot lady should enter the room and the fun goes on!

That’s all for the exclusive-leaked analysis reveal of the sex video by popular blogger Ken Wooi.

By the way, if you see pixelated boxes on the video scenes analysis, it’s not kenwooi.com’s intention – it’s just Malaysian Censorship at its best.