So I consider myself as a big boy now. For the first time, I attended a wedding dinner on behalf of myself.

It was my colleague’s wedding and it was held at Sinchoiwah (wahtaname!) Restaurant at Bandar Menjalara. 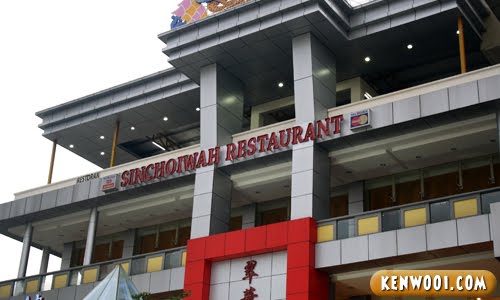 The whole big building belongs to the restaurant itself? I’m impressed. Normally I don’t get the opportunity to dine as such BIG place.

Anyway, there were several weddings being held at the same time. Everything (from the directions and wedded couples’ name) was in Chinese, but fortunately enough – I recognize the faces on the wedding photo and that led me to their wedding hall. 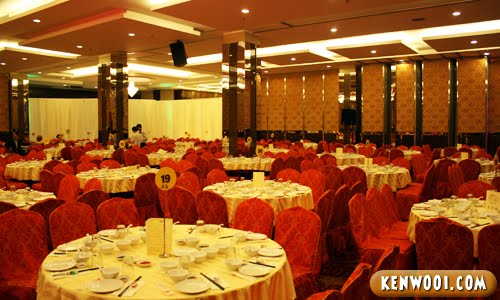 If I’m not mistaken, there were 60 tables altogether – all furnished with quite a traditional Chinese wedding colours – red, and yellow.

And here’s the VVIP table – in super red. 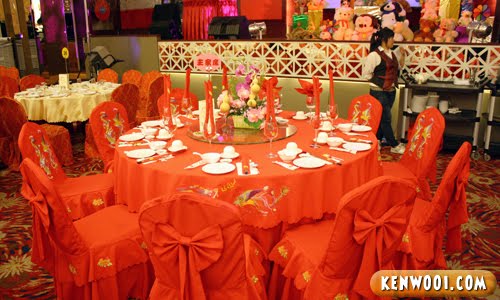 Meanwhile on the stage, there were soft toys placed on it. This is probably the first time I see soft toys being used as props during a wedding dinner, but nevertheless – they are cute. 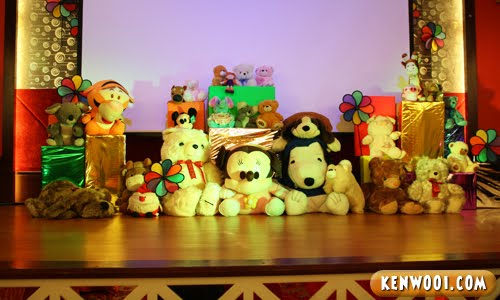 Besides the out-of-the-ordinary soft toys, there are also candies placed on the tables. Everyone has 1 and they come in different colours and shapes. 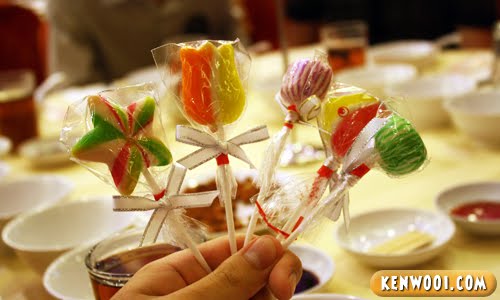 You might think that it’s just a simple gift and it’ll end up being eaten by kids, but apparently there is a purpose. Guests were supposed to hold it and wave along while the couple marched into the hall.

Pretty interesting to me.

Alright, let’s get on with the dishes for the night! 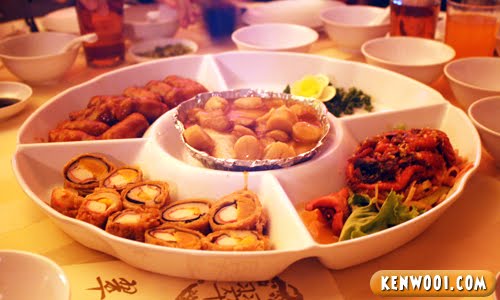 It started off with Deluxe Four Season, which consists of 4 different food – excluding the yellow flower. They have scallops, baby octopuses, meat roll and some fried seafood roll. I may get the name wrong, but it was a good opener. 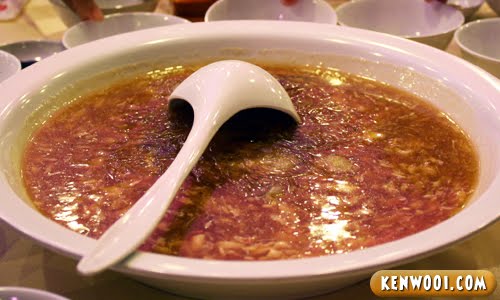 This one is definitely my favourite, Braised Shark’s Fin Soup with Crab Meat. I know, having shark’s fin is not encouraged, but it was on the menu so… just eat lah.

It tastes really nice, especially when it comes with the succulent crab meats. Yum yum! 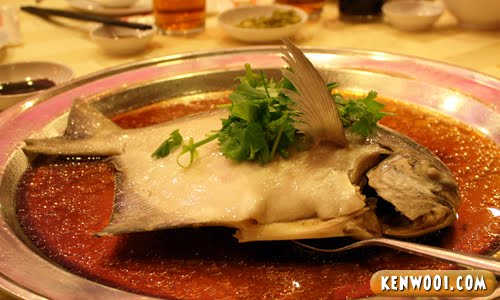 Next one is the Steamed Pomfret Fish with Soya Sauce. The fish meat is delicate – mixing it with the sauce creates a luscious taste. 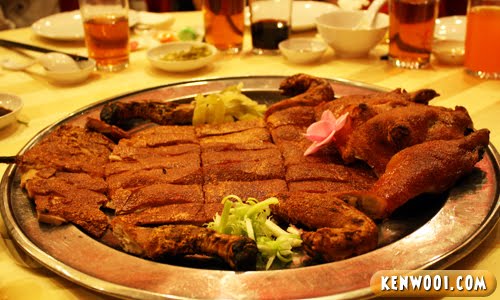 Ah, another favourite by many – the BBQ Suckling Pig. Gotta love the crispy skin, but the fats beneath are quite thick – don’t really fancy that. 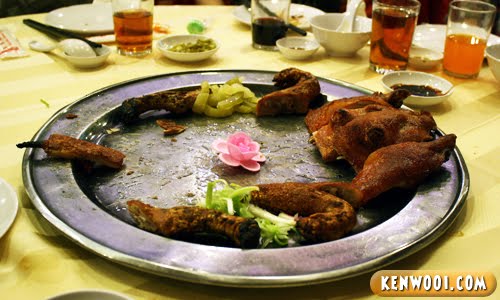 Leaving only the tail, feet and head. Some people I know would indulge these parts, apparently my colleagues don’t. :) 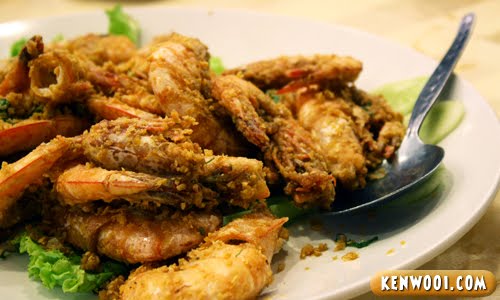 Then, we had Baked Prawns with Salted Egg Yolk & Cereal. Another wonderful dish, but high in cholesterol. I love the salted egg yolk and cereal coating, but the prawn meat was a little dry. 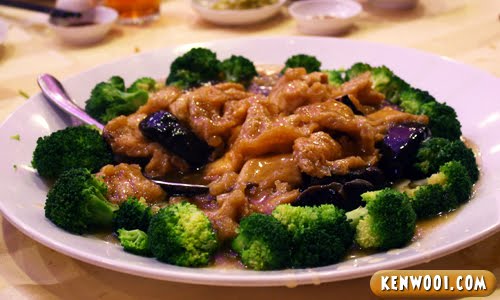 The Braised Fish Maw with Mushroom & Broccoli comes afterwards. Nicely prepared, like the fish maw and broccoli – that’s all.

P/S: Actually I was quite full by this time – I normally don’t have such a heavy dinner! :P 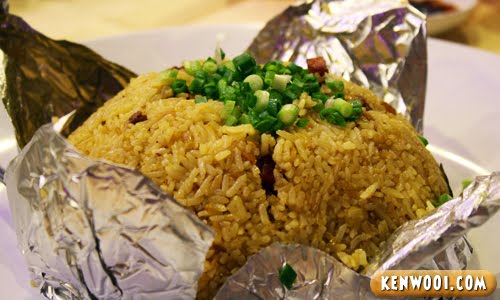 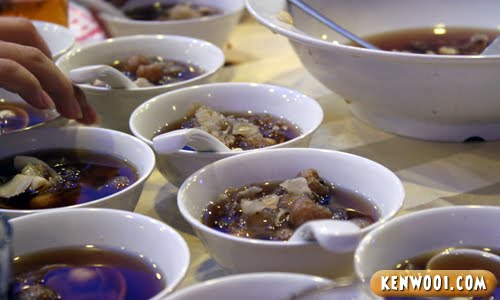 Sweetened Lotus Seeds with Lily Bulbs comes next. Yeap, it’s sweet and munching on the lotus seeds and lily bulbs is quite fun.

And lastly (and finally)… 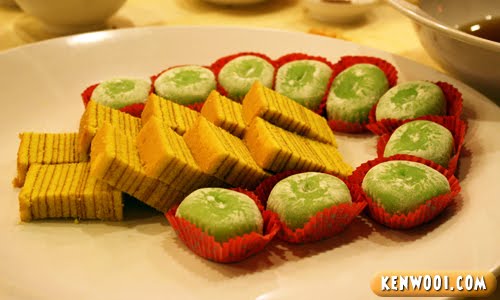 Double Pastries, they call it. Butter cakes and some chewy green balls – anybody knows its name?

Anyway, that’s all the food we had during the dinner. It was pretty much another traditional Chinese wedding dinner – makes me wonder whether I’ll do the same or not. I definitely don’t want the “Yaaammmmmmmm… Seng!” session during mine. :/ 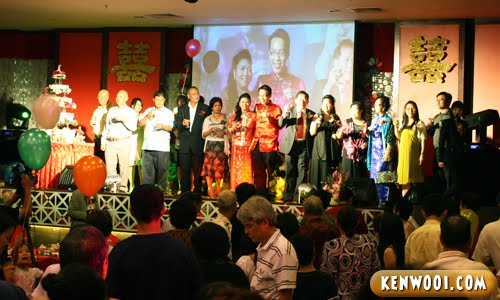 But that’s like years ahead… don’t have to think about it now right? ;)

Oh yeah, I was never involved in the whole wedding process, just came and had dinner. But there was this sign placed at my table… 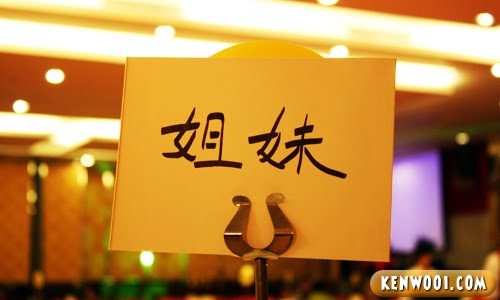 I can’t read Mandarin, but my colleague told me it’s “Ji Mui” – which means “Sister”. You know, sort of like the bridesmaid?

So, does that imply we’re on the “bridesmaid” table? o.O 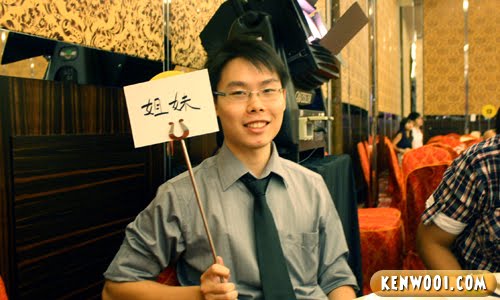 It made me felt like I was one of the bridesmaid! Imagine this… 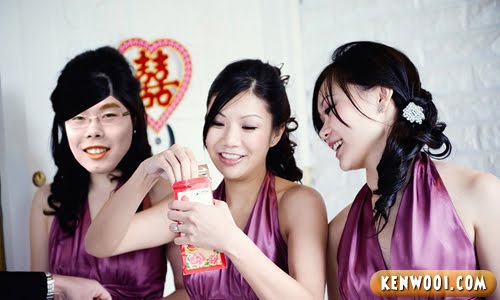 Nice, look so beautiful in big bushy hair and purple dress! And I can haz boobies too! :P

Anyway, congratulations to my colleague – Tabby, and her husband Desmond. 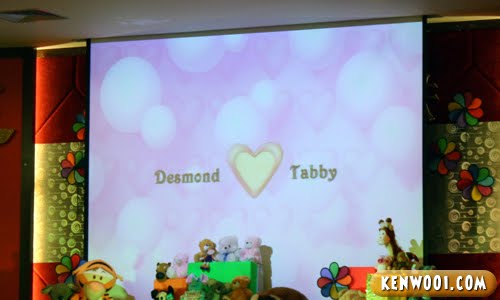 May you have lots of babies (the obvious outcome of marriages right?) to play with the soft toys!