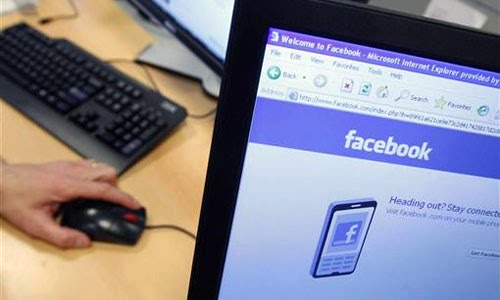 Afraid of being reported to the Malaysian Anti-Crimes Commission (MACC) as warned by Anthony Loke (Rasah-DAP), Datuk Tak Seri Ken revealed that there are other costs as well.

After more speculations from the Malaysian community and the never ending corruption accusations, he agreed to share the real story behind the whopping amount. “The Malaysians deserve to know!”, Ken claimed. 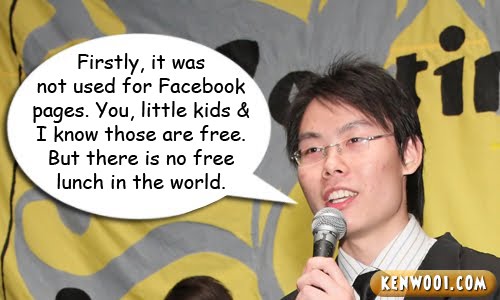 Here are the actual legitimate expenses from the RM1.8 million price tag:

1) The term “1Malaysia” is copyrighted by Datuk Seri Najib Tun Razak, hence Tourism Malaysia was required to pay the Prime Minister for using the copyrighted term. 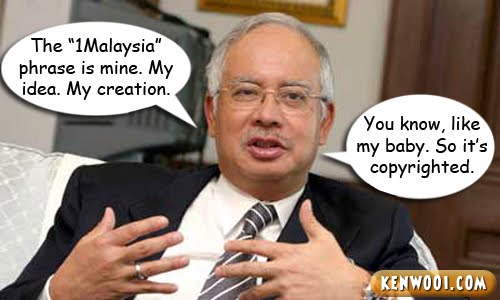 Since all 6 Facebook pages use the term “1Malaysia”, Najib’s panel of 10 lawyers demanded RM50k per usage – hence pocketing RM300k, a lucrative incentive just for a phrase with 1 number and the name of his country.

2) First Lady Datin Seri Rosmah is an avid Malaysian traveler and she was given the privilege to endorse the social media advertising campaign – with reported RM50k for each Facebook page.

As stated in the contract, her motherly figure will be displayed on all 6 Facebook pages once they are completed. 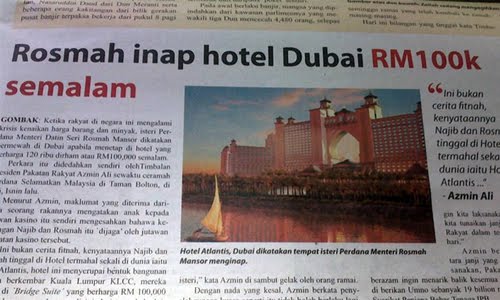 Hence, she also earned a total of RM300k – which explains her ability to travel the world and stay in world class hotels. Also, expensive hair-grooming sessions.

3) Facebook founders, Mark Zuckerberg & co, also demanded miscellaneous fee from Tourism Malaysia for charging the Facebook Page service (which is actually free for all) with a whopping US$600k (RM1.8mil). 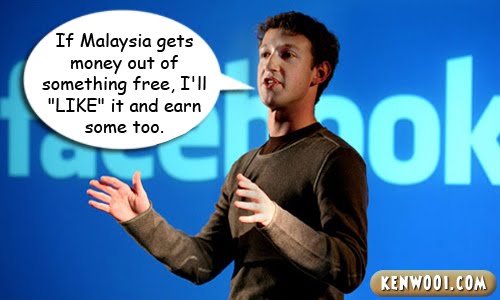 To maintain a good relationship with the Internet big-shots, Tourism Malaysia agreed to pay US$100k (RM300k) to Facebook. 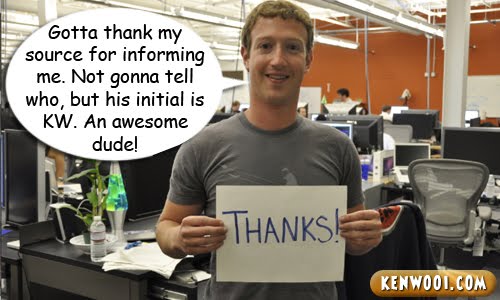 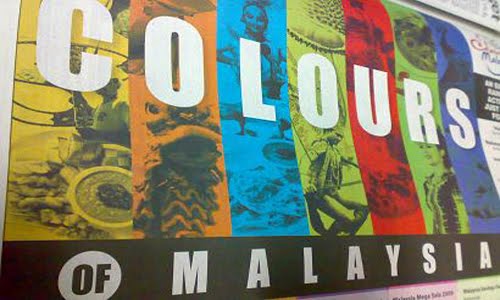 It’s a well-known fact that Malaysia has many colours, therefore this campaign is targeted to show that unity can form with any colours. 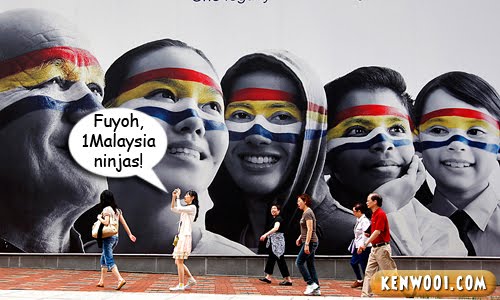 “Look at the citizen’s reaction when we used Nippon and painted on Malaysian faces!”, exclaimed Ken while pointing at the billboard.

5) Kempen 1Malaysia Bersih took a large sum of RM500k to hire cleaners to clean the whole Malaysia. According to Tourism Assistant Minister, about 5000 unemployed citizens were hired to make Malaysia sparkling clean.

“After all, it’s a campaign and it needs reasonable funds. RM500k is reasonable right?”, Ken commented, while erecting the ‘Littering is Prohibited’ signboards. 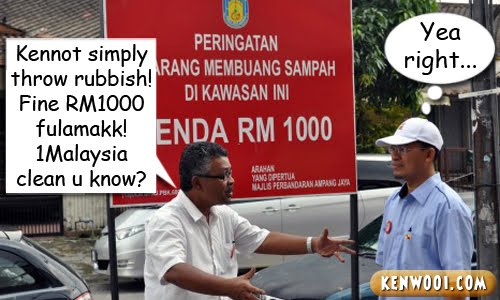 It’s like killing 2 birds with a stack of money – cleaner country and decreasing unemployment rate. There will be lots of “Cleanliness Process Engineer” job openings created.

6) In order to promote food, the Fabulous Food 1Malaysia campaign is reported to spend about RM100k. The amount is used to hire famous chefs, food critics and winner of 1Malaysia Burger Competition. 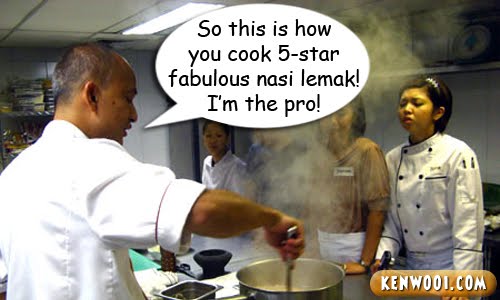 Also, professional cooking lessons will be provided to all Malaysian ministers. They will undergo intensive trainings in preparing famous local dishes such as nasi lemak, roti canai and 1Malaysia Burger. The lessons are reported to cost RM10k each.

A portion of the Fabulous Food 1Malaysia campaign will be channeled to the upcoming MasterChef Malaysia! 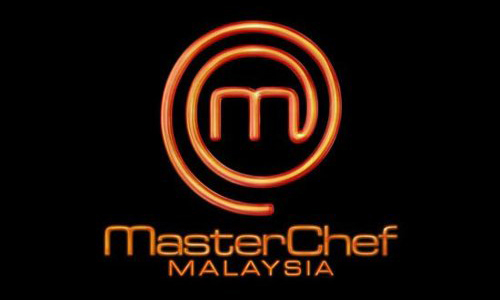 7) Besides that, a total of RM50k was spent on purchasing Facebook ads to promote the country and iconic personalities in Malaysia. 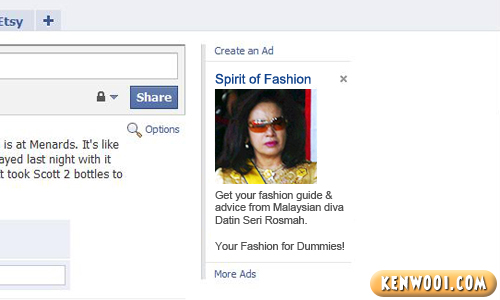 According to various news reports, it was said that the RM1.8 million included costs for designing, flash programming and coding, testing and debugging, uploading and launching the application, system server deployment and campaign management.

But actually, after deducting the now-revealed expenses – a total of RM150k was just spent on all the geeky project technical developing stuffs. The advertising agency in-charged confirmed the finalized figure. 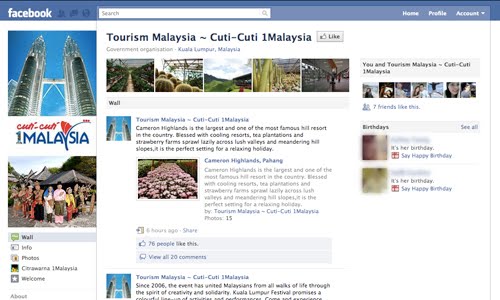 With the extra RM150k (which is still a big amount) injected into the campaigns, this is how the Facebook pages should look like in the future…

Yes, it’s the same because as mentioned earlier – “It was not used for Facebook pages”. So don’t expect artsy-fartsy design or any changes.

After the interview with Datuk Tak Seri Ken, he advised all concerned Malaysians to calm down and not speculate regarding this issue. “The money is safe with the ministers!”, Ken assures, while receiving his paycheck of RM50k for leading the Not-So-Facebook Tourism Promo Campaigns project.

– This news is reported by Kenwooi News Network (KNN), which took a cut of RM10k for publishing this informative and important news article.

P/S: Do share this article with with your Malaysian friends as the stated information will be beneficial to everyone. Thank you.