[Updated 23 July 2011] – Maxis called and confirmed I can get back my number! YAY! So this entry is a bad experience which turned out to be a happy ending. 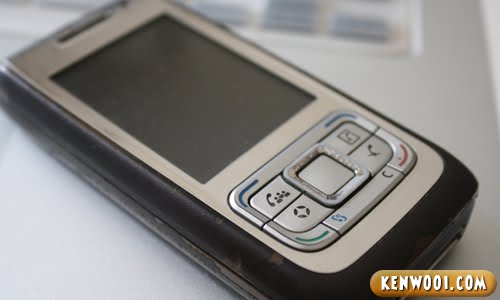 So I was phone-less, and I had to borrow a temporary phone. Didn’t get a new phone because I’m always waiting for the new iPhone version.

To make things worse, my Hotlink Prepaid number was deactivated a week ago. So secondly, I was number-less too. 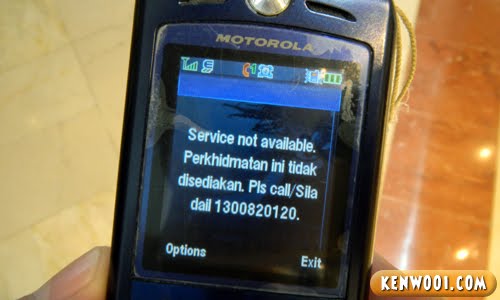 Well, if you’re a Hotlink Prepaid user, you’d know that you have 90 days to reload or else it’ll be deactivated by Maxis.

So yeah, that actually happened to me. I procrastinated, waited till the 91st day (so that I have an extra day extension) then only decided to reload. Well, that kiamsiap-ness in me was the root of this unexpected trouble.

My number has been deactivated. My my, what have I got myself into? 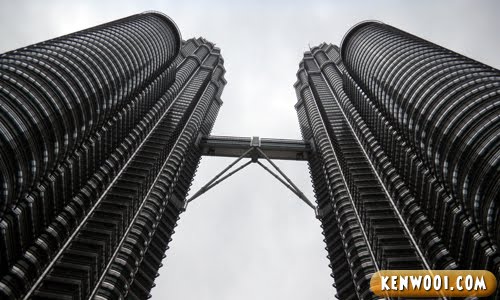 So immediately over the weekend, I went to the main Maxis Center at KLCC to get it solved, hopefully to get my number back. 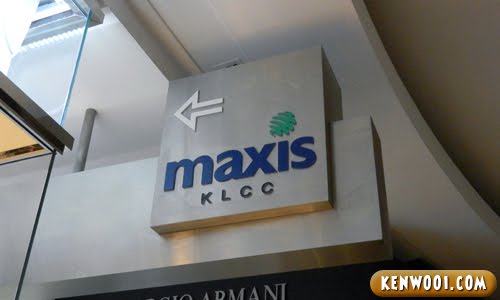 Reached there quite early in the morning. Took my number and waited. 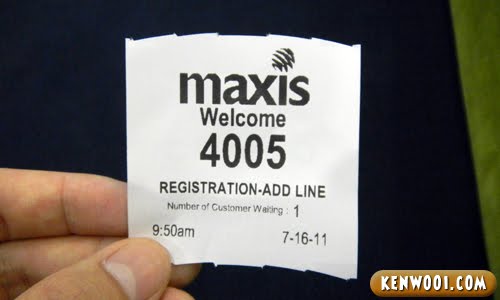 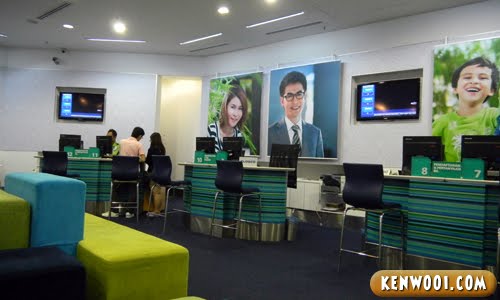 The scene was intense in the Maxis Center. Well, that’s just me of course – because I was on a mission to save my number.

Oh, do you know that I’ve been using the same number since 2003! It was my first ever number. 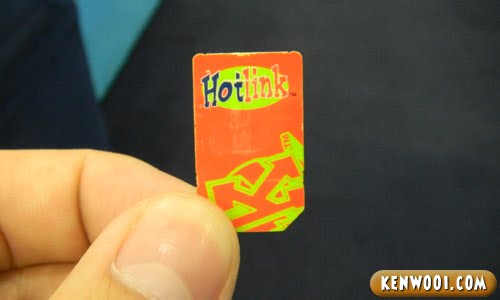 Yes, almost 8 years and this Hotlink SIM Card has been my companion since high school. It’s probably the only thing I’m still carrying around since 2003. 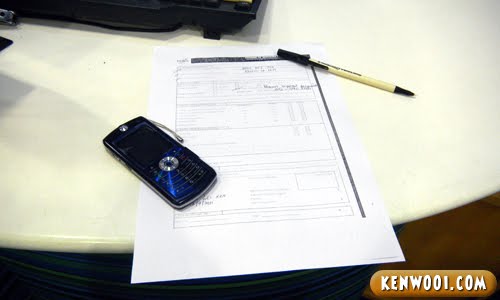 I was summoned to the counter, made up a story that I was at overseas for work and didn’t reload in time. Crap crap crap. My number for 8 years, I’ve been a loyal user. Bla bla bla.

But the dude told me that he can only forward my request to the “number” department to check whether it’s still available or not. If it is, they’ll call me back and I have to convert it to a postpaid.

I was like… Huh? I’ve been using my Hotlink so comfortably but now I have to convert it to postpaid and pay extra charges like billing and 6% Government Tax?

Oh well, as long as I can get back that number, I’m fine with it. 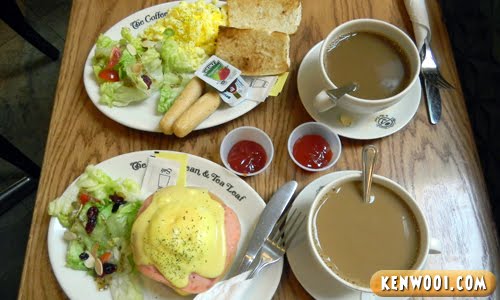 So I left the Maxis Center, had a late breakfast at Coffee Bean and kept regretting. Why lah this trouble, I should have just reloaded earlier. Even the tasty breakfast set couldn’t cure my sorrow.

Okay, it’s a little out of topic. Let’s continue. 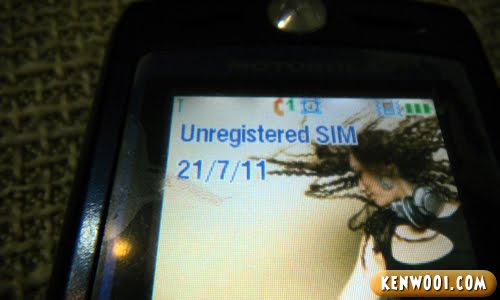 After a few days, my temporary phone finally displayed “Unregistered SIM” on the screen. Initially people could still call me even it was deactivated, but a few days later – it’s totally terminated. No calls in, no calls out.

Never mind, I kept waiting and hoping for the good news from Maxis. I was pretty confident that I can get back the number because I don’t think anyone would want it since it doesn’t consist of a beautiful string of numbers?

I also tweeted @MaxisListens on Twitter to help me out. But today, I received the dreaded news… 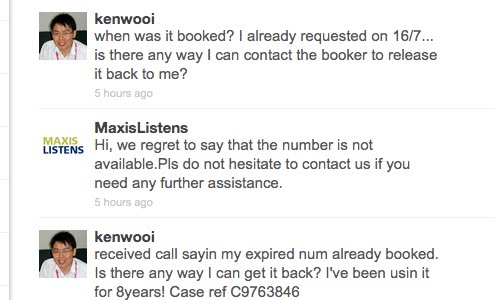 WHAT? My number is no longer available? I was distraught! o.O

I was simply devastated. The precious number which I’ve been using since 2003 is gone, like forever. Someone else is gonna use it soon and many people have taken that number over the long 8 years.

Actually, I don’t really mind. No problem with changing my number, but the only concern is my blogger name card… 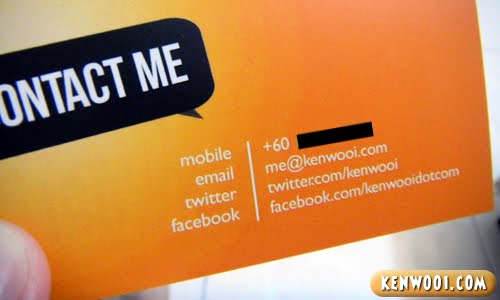 [Updated 23 July 2011] – Initially exposed number now censored. Since I’m getting it back, there is no more issue with the name card. :)

Don’t mind revealing my (former) number to the world now, since it’s no longer mine. I have 500 pieces, probably given out only 30+ pieces. So the rest of the 450+ name cards still have my old number!

Honestly, I feel bad to the sponsor of my name card. Now I probably have to ugly-fy it by either writing or concealing by sticking a piece of paper with my new number on it.

*Breath in, breath out* Anyway, since it’s gone for good, I was on another mission – to get a new number from Maxis. 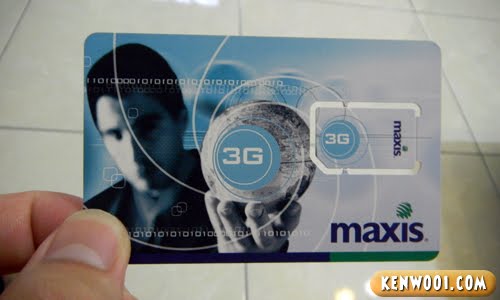 I had the option of getting another Hotlink Prepaid number, but since I wanted a similar number as my old one, I had to get a Maxis Postpaid.

By selecting the cheapest (spot the kiamsap-ness) Value Plan of RM30 a month, it’s not just flat RM30. I also have to pay extra RM5 for billing and 6% Government Tax.

Furthermore, there is no longer Activ10 (with Postpaid, you must pay extra) and no Hotlink reward points anymore. 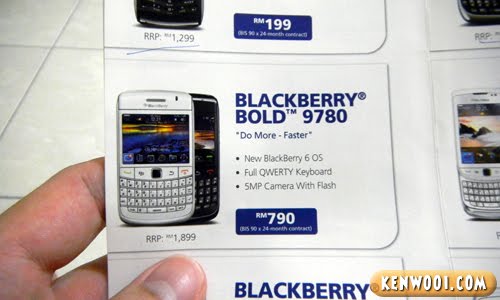 While waiting for the Maxis lady to register my new number, I was actually looking at the BlackBerry plans. If I were to own a BlackBerry, my target would be the famous BlackBerry Bold 9780.

At that moment of time, I was so tempted to get myself a smartphone – maybe a BlackBerry. Thoughts kept running through my mind… should I, should I not?

But I would have to pay more (kiamsap alert!) and it will be another commitment. 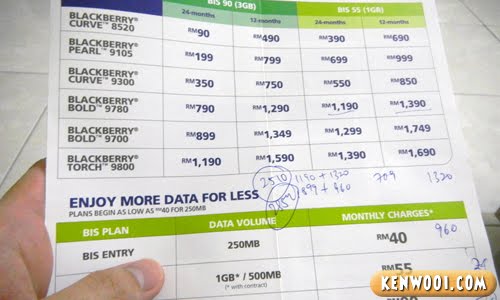 I calculated the extra charges if I purchase the 24-months contract. I even compared the BIS Standard and BIS Entry data plans, figuring out which is more worthy.

But… all I’ve ever wanted is an iPhone! But… how? Maybe I should just take the plunge and reward myself with a BlackBerry since I’ve been a good boy all year long?

You know, even high school and college kids nowadays already own a smartphone. So how can a successful blogger working adult like me still don’t own one? How can?? 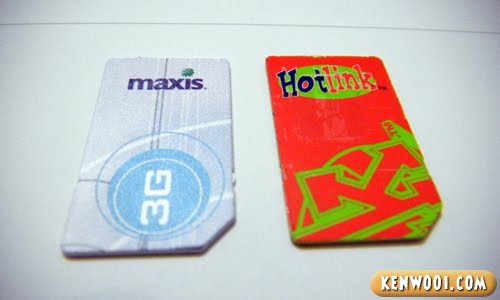 After much thoughts and contemplation, I resisted the temptation and walked off with just a new Maxis Postpaid SIM card. If you’re wondering, only the last 3 digits are different on the new number. :)

You know there is a saying “You can judge a person whether he is a kid or not by their phone plan”? Well if you’re using a prepaid you’re a kid, otherwise you’re a grown man.

So what can I say – am I finally a grown man that I have a postpaid now? Oh well, being proud to be finally a “man”, I penetrated the virgin SIM card into the phone! 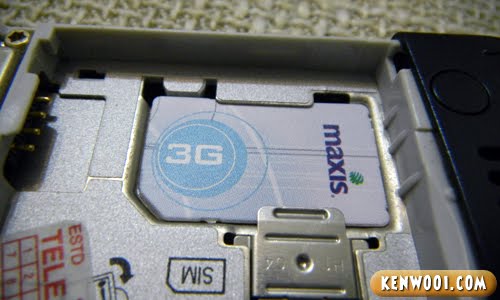 The morale of the story – Better late than never, but there is no harm being early.

P/S: You know what I thought of doing? If my old number is activated and used by the new owner, I thought of giving a call and perhaps to request to redeem it back. What do you think?

P/P/S: But actually, my new number is much nicer than my previous number. Hmm… 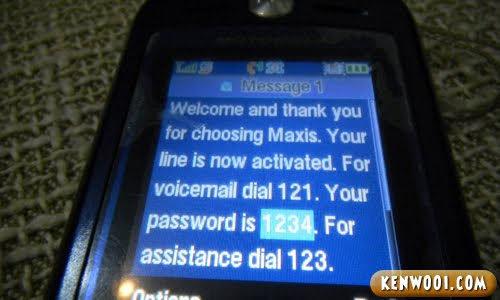 Explanation – it’s because I appealed via 2 methods. 1) Manually at Maxis KLCC. 2) Online on Twitter @MaxisListens. Therefore, both processed my appeal and when MaxisListens checks my number, it’s booked. But actually, it was already booked by Maxis KLCC under my name. So the misinformation happened because there is no update between the 2 parties.