Malacca, or Melaka if you prefer, is one of the most visited cities in Malaysia, even though it’s the third smallest state in the country. 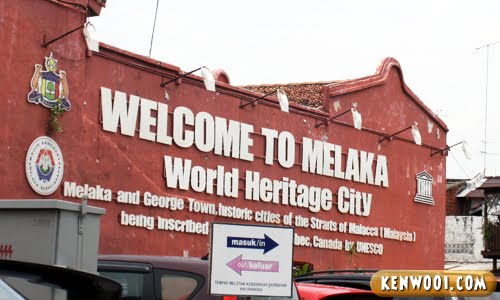 The last time I visited Malacca was back in 2009. I have blogged about that trip before, but it definitely won’t be as comprehensive as the entries I’m about to write this time.

So yeah, if you’re following me on Twitter, you must have known about my trip to Malacca during the Merdeka Raya break – just 2 days 1 night.

Long story short, we did what we had to do. Upon reaching Malacca, we went straight to The Stadthuys, a must-see place. 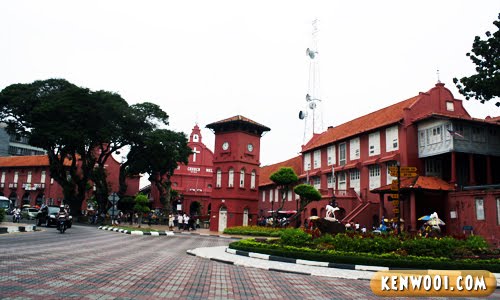 In Dutch, it means the municipal town hall. The original colour of the building was white and was changed to red later on – hence currently known as “The Red Building”. It’s one of the historical structures still well-preversed at the heart of Malacca Town.

Too bad the sky was super white when I was there, the photo would have been a masterpiece if the sky were blue. :P

Anyway, tourists, both local and foreign, normally to use this area as a gathering point because it’s situated at the central of other attractions such as Jonker Street and A Famosa Fortress. 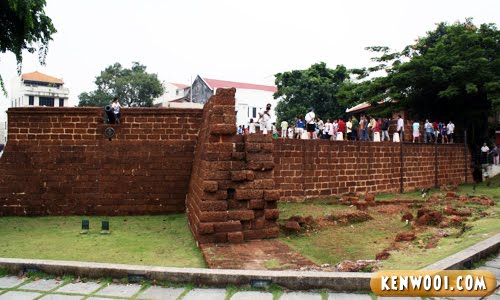 A few meters away, there lies a new fort. I couldn’t recall seeing this back in 2009, but according to the information board, this is the site of the Malacca Fort and it was revealed to the public quite recently.

It’s just another attraction with cannons. 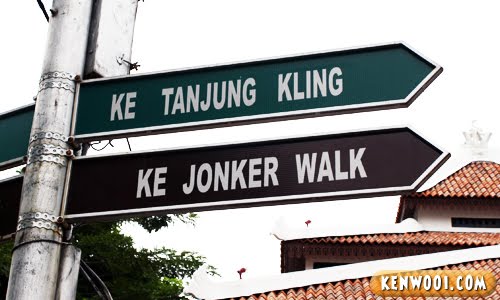 After strolling around for a bit, we headed to Jalan Hang Jebat, or famously known as Jonker Walk (or Jonker Street).

During the day, the shop businesses along the road operate as usual – with vehicles passing by every minute. 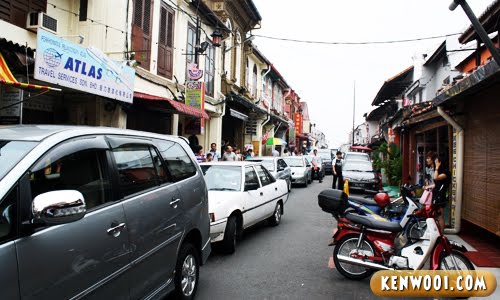 Since it was a public holiday, it was quite crowded – with both people and vehicles. The queues were long especially at restaurants and food stalls.

Jonker Street used to be well-known as a place to shop and bargain for antiques and unique collectibles. However, in order to survive the wrath of the modern generation, adaptation to changes are necessary. 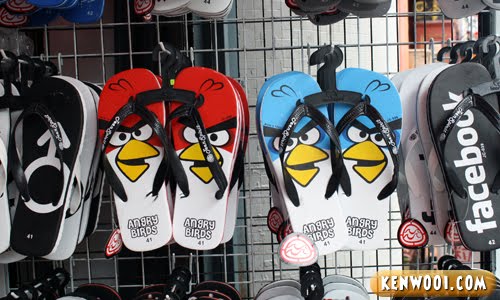 Angry Birds and Facebook slippers, being sold at Jonker Street? In historical Malacca? If such things were to exist in the past, the conquerers would be catapulting birds instead of heavy stone balls. 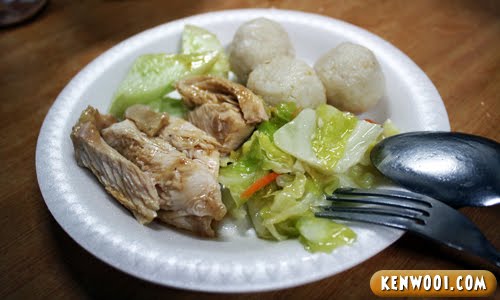 To be frank, I wonder why is it so famous in Malacca? To me, it’s like an ordinary rice served with Hainanese chicken – except for the ball-shaped rice.

The chicken tastes ordinary too.

Know what, I think the rice balls exist because of an intentional incident in the past. Someone itchy hand played with rice, rolled it into balls and served it – there, rice balls were invented! 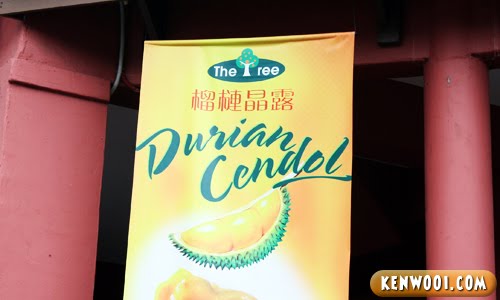 Another food you shouldn’t miss if you’re in Malacca, or Jonker Street especially, is the Durian Cendol. Apparently the one at Jonker 88 is declared as the best Durian Cendol, and at times like this, you will surely see queues.

Since we insisted on having it, we queued up and yes… it was delicious and cooling during the hot and warm atmosphere. 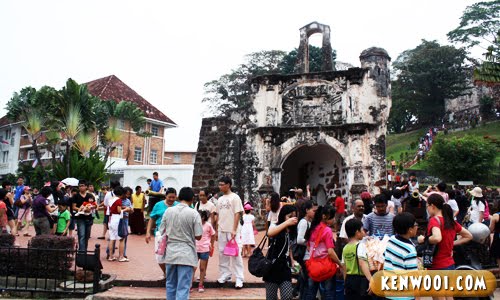 Not far away from The Stadthuys lies the tiny yet famous Porta de Santiago gate, which was part of the mighty A Famosa Fortress.

Just look at the crowd. Wanna take photo without human in it was as impossible as defending Malacca from Alfonso d’Albequerque and his Portuguese army back in 1511.

Anyway, there are steps to the ruins of St. Paul’s Church up the hill from the Porta de Santiago. More on that next time. The bicycle rickshaw business around that area has definitely been given a facelift. You wouldn’t miss its presence because it’s no longer just a simple rickshaw – it’s now like heavily-decorated carriages with speakers and woofers attached!

If you take a ride, it won’t be quiet journey. These rickshaw operators would play entertaining modern music throughout the ride. I guess it would’ve been more suitable if they actually play Baba Nyonya or classical Malay songs.

Oh well, old is gold – but they would one day give way to the trendy young, new and fresh. 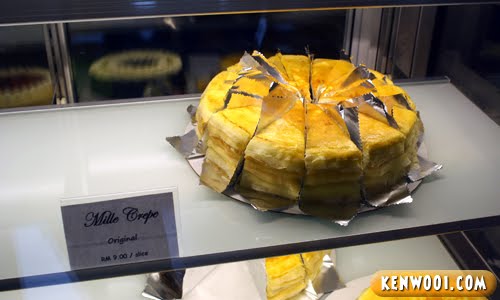 Anyway, a few hours later and we proceed to the next destination – Nadeje!

Its selection of Mille Crepes is apparently another famous food attraction in Malacca. No, it’s not some historical food by the Japanese, it’s actually a modern delicacy.

Looks yummy no doubt, had some, texture is one of a kind, but tastes just okay. Nothing spectacular about the cakes. Again, I wonder why it’s a craze in Malacca. 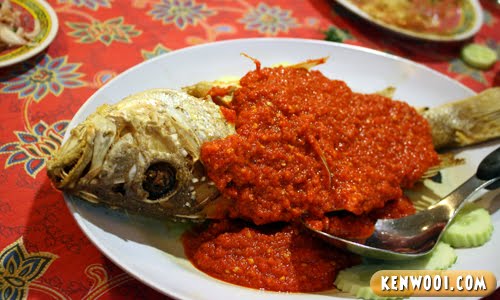 Next for dinner, we had Nyonya food at Nyonya Makko Restaurant. As usual, Malacca is known for its authentic Nyonya food and it’s common for tourists to taste them before they leave the state.

Verdict? The food by Makko were just okay. Nothing so Nyonya-ish about the dishes.

Alright after that, we headed to another must-eat food – Satay Celup. 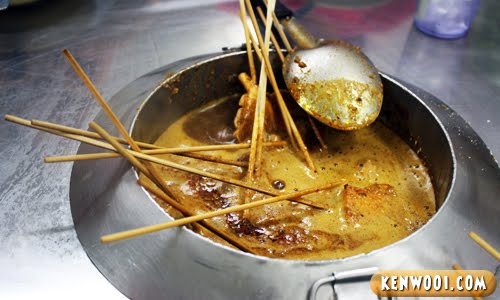 Satay Celup is my all-time most favourite food in Malacca. I had it before at Ban Lee Siang and this time, I wanted to give Capitol Satay Celup (tried it on another visit to Malacca) a try.

But… the queue was freaking long and it wasn’t moving at all. 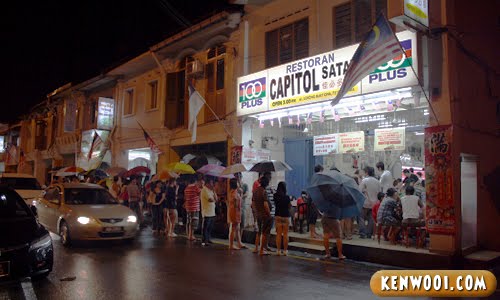 Look at the madness! Just stand there and wait for an hour plus?

Well, we didn’t. In the end, we opt for another satay celup restaurant, Old Village Satay Celup – which is just 3 doors away from Capitol. 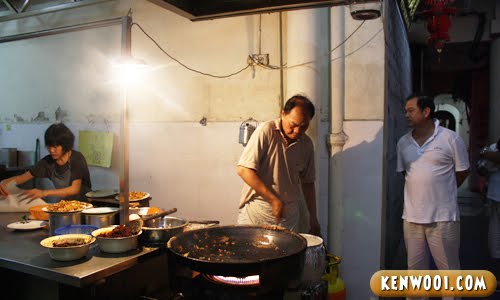 Later that night, for supper, we dropped by for some fried oysters at Jalan Bunga Raya. It’s supposedly famous.

Yet again, another big crowd. With 1 man solo on the job and with so many orders, we actually waited 1 hour 15 minutes.

Yes, that long – just for 4 packets that costs RM6 each. 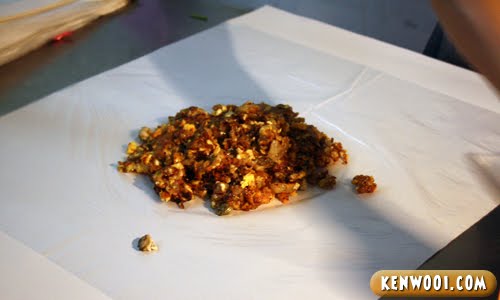 I know it’s about oysters being fried – but since it’s fried mainly with eggs and I’m an egg lover, I enjoyed it because the portion of the eggs is a lot.

But the rest said Penang fried oysters are much nicer than this. This Malacca version has too much eggs and too little oysters. No doubt about that.

Finally, at the end a long day, we headed back to our hotel – Holiday Inn Melaka. 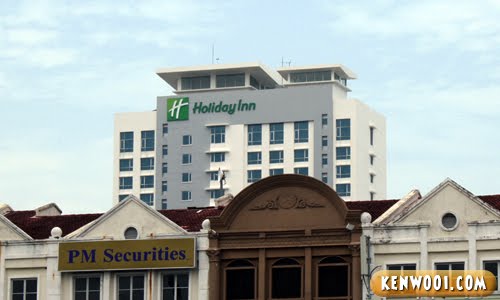 The stay was good, slept well in their cozy room. Woke up, and a brand new day awaits!

After breakfast in the morning, it was time for Menara Taming Sari! 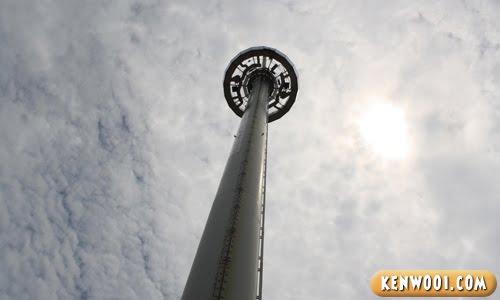 Located at the middle of the busy area surrounded by museums and shopping centers, the Menara Taming Sari is the first of its kind in Malaysia – it’s the only observation platform which provide 360° rotating view of the entire city.

Costing RM10 for a Malaysian adult (MyKad needed), the 7 minutes adventure was certainly an experience. Despite being able to see the city at that height, the night view would definitely be better than the day view. 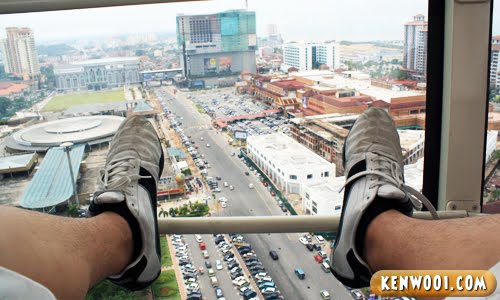 But due to time constrain, we were only able to go up the tower during the day. So yeah, the next time I visit Malacca, I will opt for the night one.

Then, before we leave Malacca, we bought some pork satay. We went to the one located along Jalan Kota Laksamana 1/1. I’m not a pork satay fan but I was told that this isn’t the best in Malacca. Oh well, will search for the best one next time.

After finishing up the pork satay, we headed back home. That pretty much sums up the whole local trip.

Anyway, prior to the trip, I prepared a list of common attractions in Malacca, which includes the road names and the respective GPS coordinates. 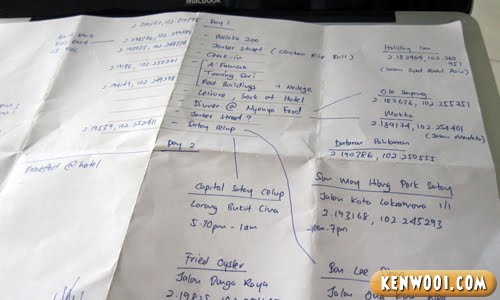 All in all, we managed to fulfill majority of the listed itineraries, except for Melaka Zoo (not opened) and Capitol Satay Celup (queue was crazy!). Other than that, everything went according to plan.

During this trip, it was my first time relying on a GPS device to lead me to my desired destinations. Fortunately, the locations were accurate and it’s such a convenience when exploring unfamiliar places.

But whenever I enter the car and start the Garmin device, this “warning” shows up… 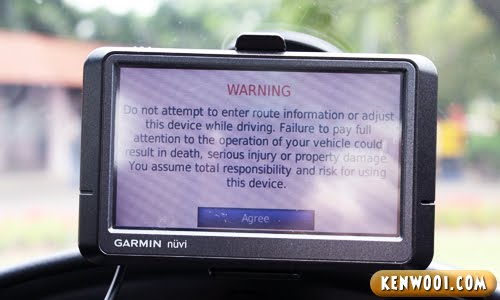 With just a tap of a button, I’m actually agreeing that if whatever unwanted *touchwood* situations happen while using the device when driving, it’s not the Garmin’s fault – it’s mine!

Who knows, this GPS device could go crazy and lead me to my Final Destination. Oh crap!!

42 thoughts on “A Trip to Malacca City”