I’ve never experienced how Monday Blues felt like until this recent Monday, 26 September 2011 to be exact. Monday came, I drove to work and reached the car park – as usual.

But I heard a “knock” while winding up my window after retrieving the parking ticket. So I pressed the “down” button again and to my horror… the driver’s seat window glass got loose and was slightly rotated as it winds down. I knew I couldn’t just park and head to the office – the window couldn’t close anymore!

Oh by the way, don’t ask me for pictures. Since it was an emergency – I immediately reacted to the incident instead of swiping out my phone to take photos. True story.

So… after calling my parents (yeah, I’m still parents’ boy), I went straight to the Toyota Service Center at Section 19, Petaling Jaya.

Got there with the window glass dangling loosely, some nuts or bolts must have gotten loose – I suspect.

My last visit here was 6 months ago, the last service appointment. This time, no appointment made and thankfully, they entertained my issue on the spot. 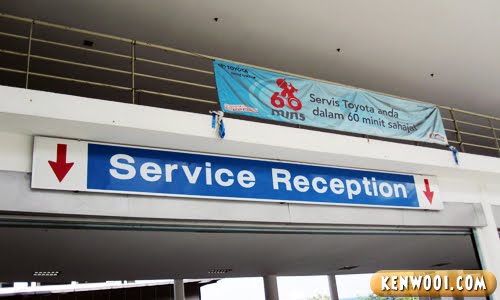 The service advisor who handles my car attended to me in a while. I explained the problem and he checked right away.

After a few minutes, he said the window regulator (a mechanism that controls the up and down motions of the side window) has worn out and it needs to be replaced. Great, seemed like problem rectified.

But… I’ll need to wait till 2pm for the spare part to arrive to the service center. Great, I eventually took an Emergency Leave for the day. Oh well, since I’m helpless, I waited… 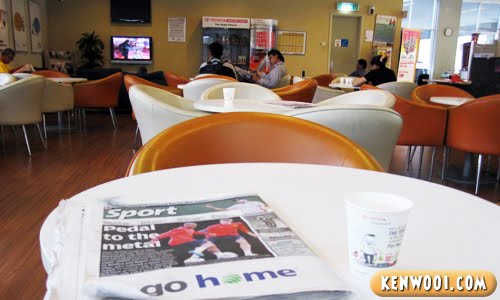 I spent the whole morning at the customer waiting area, drinking free-flow Milo and munching on Luxury biscuits. Both complimentary.

It was a workday, so I did some work with my laptop as well.

Luckily I brought along my Maxis Broadband USB Modem, or else I’ll be bored to death! 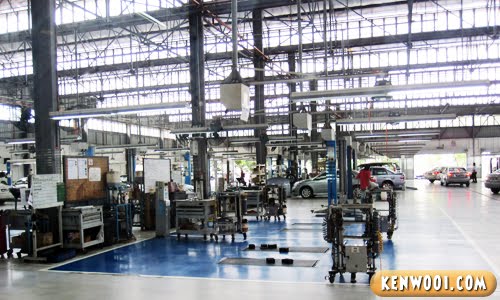 Fast forward 7 hours, at 4pm (I was there since 9am in the morning), the service advisor approached me and said that everything is done.

But… there is a problem. He told me that the window glass cracked, and naive me thought it’s just a tiny crack. So I asked why is it a problem?

Instead of explaining, he brought me to my car to see it for myself.

And I was greeted with… 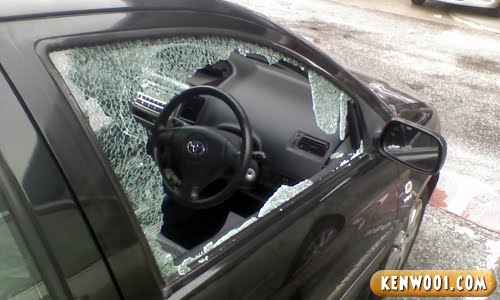 Wah!! What in the world happened? That is NOT something I expected.

Or… was it because I left my Proton bag in my car…? 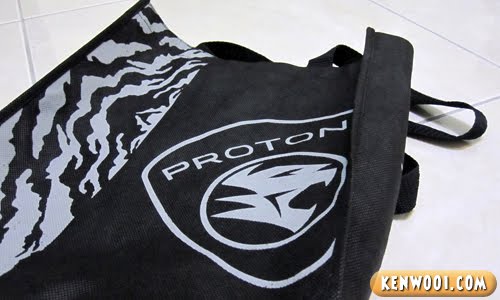 Did the Toyota people get mad after seeing a Proton stuff within their premises, so they smashed the window to question my loyalty? Possible?

Anyway, since it was already late and they couldn’t fix it on the day itself, they gave me a temporary car… 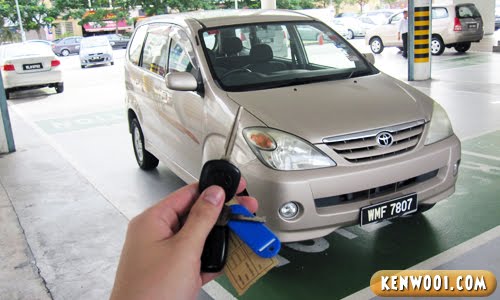 An Avanza. I thought it’s cool, you know, getting to drive another car for a day. But when I received the car, gosh, the condition is quite crappy. 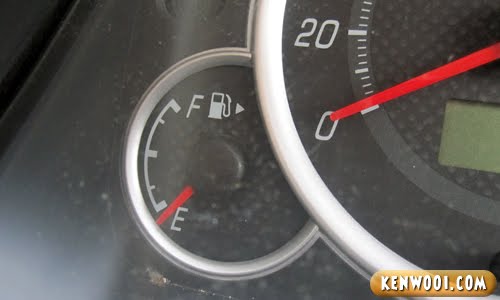 Also, the petrol tank was almost empty. Since I gotta use it for a day, I reluctantly pumped RM5 worth of RON 95 petrol – hoping that I could last until my car is ready the next day.

Frankly, I was quite upset. First, the problematic window. Fine. Then, the window glass mysteriously got shattered. No idea what happened.

Wah, this Monday damn suay (unlucky) lah. Furthermore this is the first time I had to separate with my beloved car. I was worried – wondering how’s my poor car doing at the workshop, with a shattered glass.

I hope she’s not bullied by Camries and Priuses. 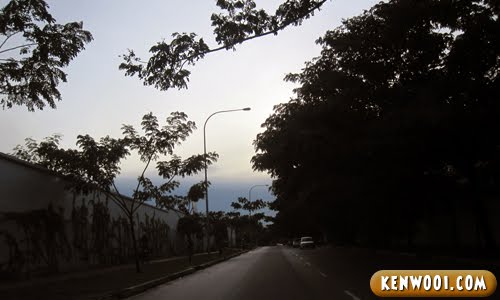 Anyway, the next morning. I took the Avanza to work, as usual. Nothing went wrong and the petrol seemed enough, for that moment. 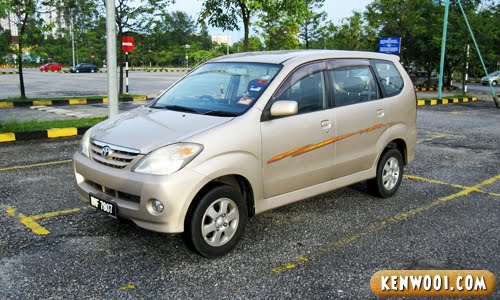 Parked, and went to work. At about 430pm, I intentionally disappeared from work earlier (shhh.. don’t tell my boss) to collect my car. 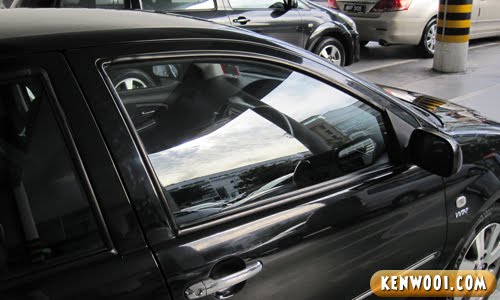 With a brand new window glass, I’m in love all over again. The service advisor threw in a complimentary car wash too. Great.

Oh by the way, the replacement window glass costs about RM70. But since mine got shattered within the premises, it’s compensated by Toyota. 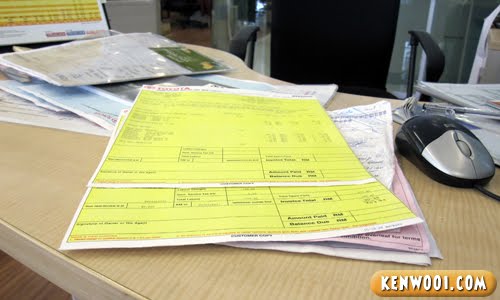 So how much did the repair and maintenance cost of a single window?

The window regulator costs RM389.70 with 2 channel clips (to hold the window glass) at RM9 each. Labour charges are RM35. 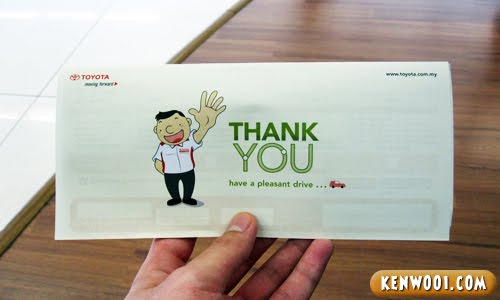 Paid, got the receipt and left. They thanked me for paying so much.

Well, despite having problem with the mysterious shattered glass, the service provided is commendable. Overall, it was good (but slow, since spare parts need to be ordered) and they even lent me a temporary car.

If I were to send it to a nearby workshop (and this issue occurred), the foreman would have asked me to settle my own transportation. 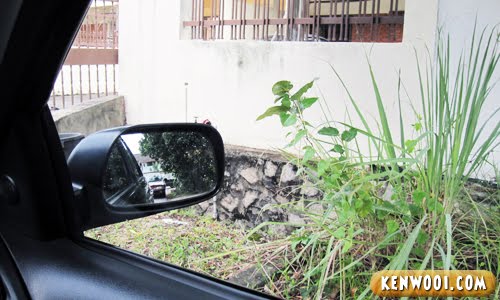 Anyway, the new glass brings joy and happiness. So new and spotless, it’s like there’s no glass at all. Ultimately, I’m delighted to drive my own car again. :) 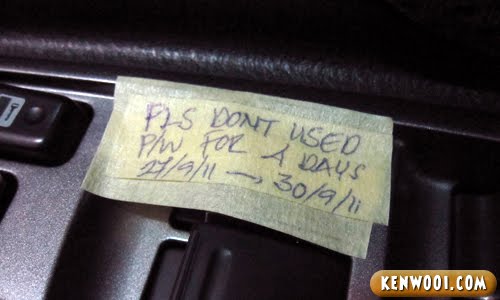 Apparently it needs a few days for the glue to dry up properly.

So yeah, quite an experience to be honest. I’d never know that I loved my car so much if this incident didn’t happen.

My car is my darling girlfriend. I love “driving in” her, and she’s such a cutie. Just look at her amazingly beautiful boobs… 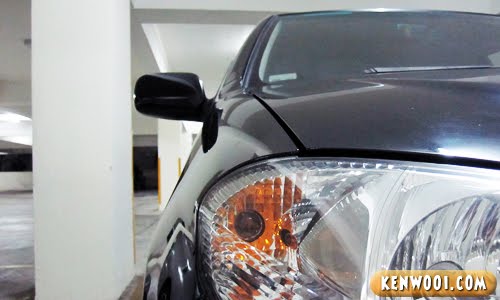