Very recently, if anyone ever noticed, kenwooi.com was suspended for almost 24 hours.

Well, before that, it was another ordinary day, still jolly and delighted with the spike of traffic received due to the Sex Book by Obedient Wives Club parody entry, which was published a day earlier.

Then without any prior notice, all of a sudden… BAM!!! This account has been suspended. 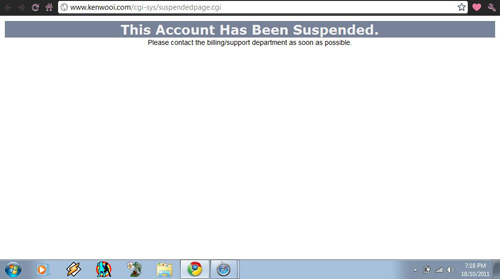 Screen shot credit to Priscilla from Howdidifallandlandhere (how didi fall..?). It’s interesting that she actually bothered to print screen. :P

Anyway, while my beloved blog was unavailable – I stayed calm and had some deep thoughts. Coz usually, if such a case happens, I would normally activate “WTF?!” mode, curse the web host and quickly migrate to another host. 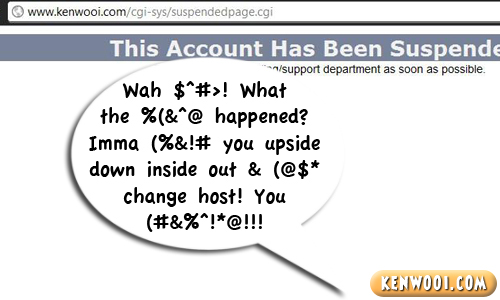 But this time, instead of being nasty, I actually took it lightly and told myself – hey, let it be lah. If it doesn’t get un-suspended, I’ll keep waiting. And at the same time, thoughts ran across my mind…

1) Why am I blogging in the first place?
2) How attached am I toward kenwooi.com?
3) What would I do on the Internet if my blog is gone?
4) Would anyone actually care if my blog is gone, like forever?
5) Should I stop blogging?

Oh wait, would I even stop blogging? Apparently not. Coz… I AM BACK FROM SUSPENSION! WOOHOO! 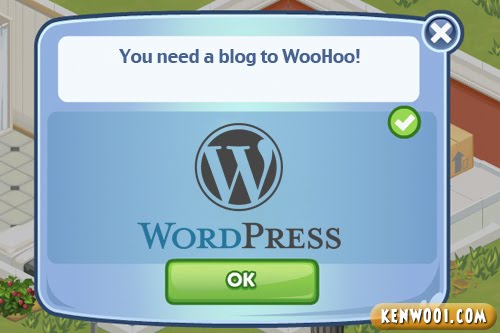 So yeah, this is just a quickie. Stay tuned!

Oh by the way, why the web hosting account got suspended? It’s due to sudden high server load. So, apparently it’s illegal for kenwooi.com to get high traffic huh? So not fair.