If you’re a pizza lover, you gotta drop by this eatery – it’s the California Pizza Kitchen. There are a few branches around, and I went to the one at Fahrenheit 88 Bukit Bintang. 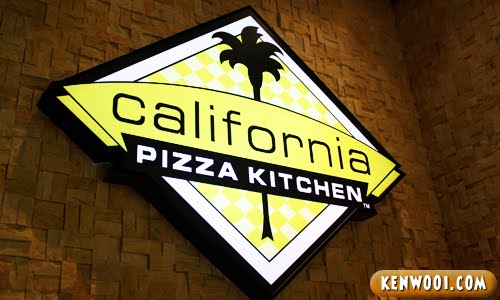 It’s known as a casual dining chain featuring a line of hearth-baked pizzas, which means the pizzas are baked over a fireplace.

Anyway, once I stepped in, the first thing that captured my attention must be the ambiance. The concept is so cozy and homely, I could actually just lie down on the couch and sleep right away. 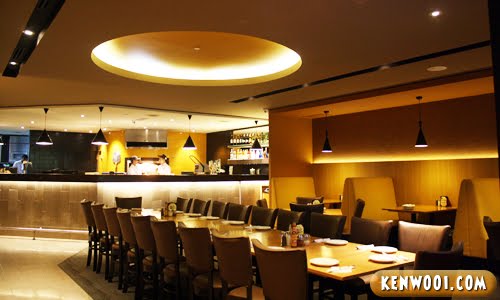 But unfortunately, I can’t… because I’ve some food to wallop.

California Pizza Kitchen, or also abbreviated as CPK, has just introduced new items on their menu. Besides the hearth-baked pizzas, they also serve pastas, salads, appetizers, soups, sandwiches and desserts.

Let’s have a look at some of them, shall we? 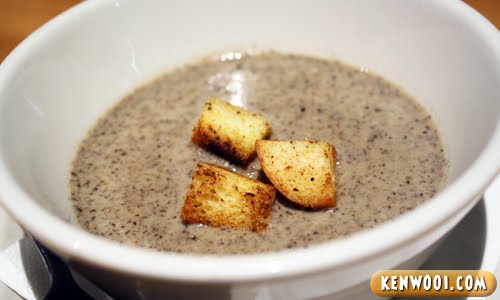 For the first appetizer, the Wild Mushroom Soup was served. To be frank, this mushroom is unlike any of those that I’ve tasted before. California Pizza Kitchen’s version is so much creamier and has a prominent mushroom fragrant.

The garlic-herb croutons adds some crunch into the soup. I’d definitely come back for this. :) 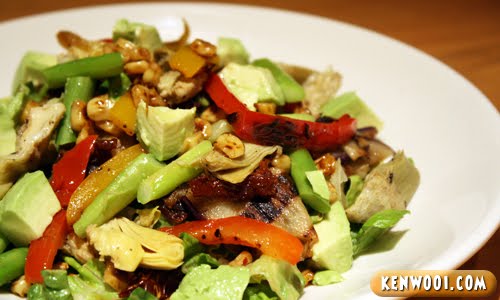 The next appetizer is Roasted Vegetable Salad. Some of the ingredients used to produce this salad are asparagus, eggplant, corn and topped with avocado. It’s simply fresh and crunchy, possibly the a favourite dish for salad lovers. 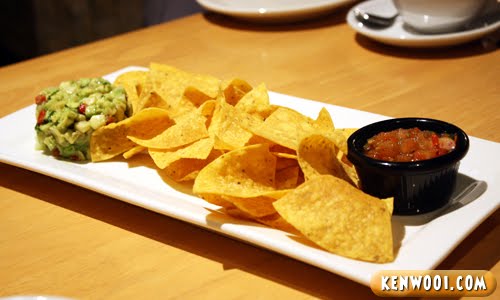 The White Corn Guacamole & Roasted Tomato Salsa with Chips was also another appetizer served. Having the tortilla chips with the guacamole and salsa could be a food obsession – I’ll certainly be munching away if it’s free-flow. 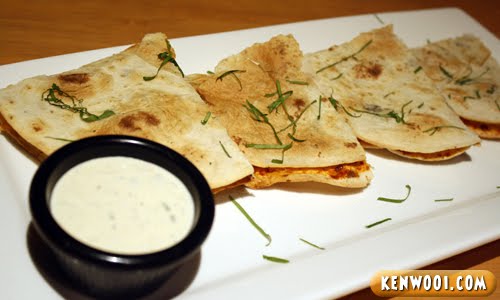 The last appetizer was the Spicy Chicken Tinga Quesadilla. With grilled chicken, cheese and more savory mixture wrapped inside the corn tortilla, it really tastes good together with the creamy ranchito sauce.

Alright, once the mouth-watering appetizers are done, the pastas are next on the menu. 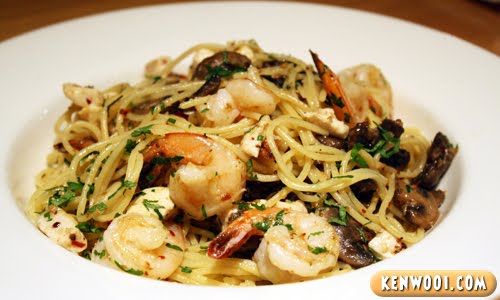 One thing I love about the Olive Oil & Garlic Spaghetti is the generosity of the chicken meat and shrimp. Since it’s prepared with various ingredients, it’s really flavourful. 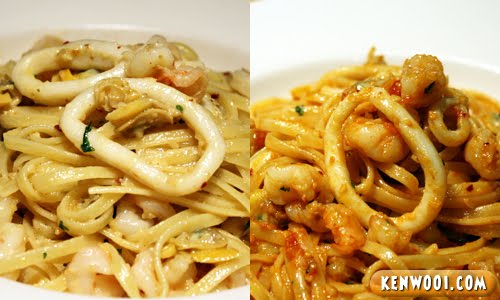 For the Seafood Linguini, there is a choice – you could have the linguini to be tossed with either lemon cream sauce, or Italian tomatoes and fresh basil sauce. Both has the same ingredient, but in different sauce. Once again, gotta commend on the generous amount of seafood. 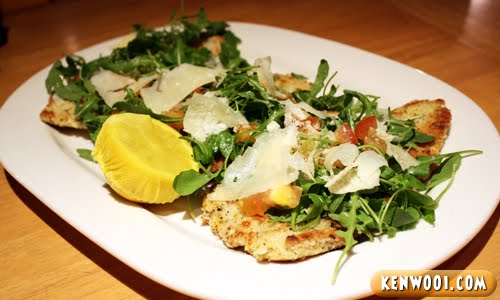 Another main course would be the Chicken Milanese. The chicken breasts are pounded and lightly coated with bread crumbs. Even though the chicken cutlets are really good, the portion is huge and you can’t finish all on your own. So apparently this dish is meant for sharing.

And finally, the highlight of the menu – is none other that the hearth-baked pizzas! 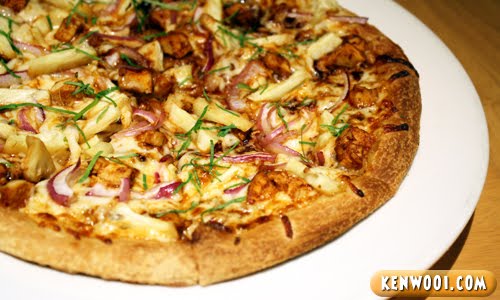 This not-so-typical Hawaiian BBQ Chicken Pizza is topped with ingredients such as BBQ chicken, pineapple, cheeses and barbeque sauce. Hawaiian chicken pizza has been always my favourite – it’s probably the only food that makes Hawaii so much closer to Malaysia. Right? 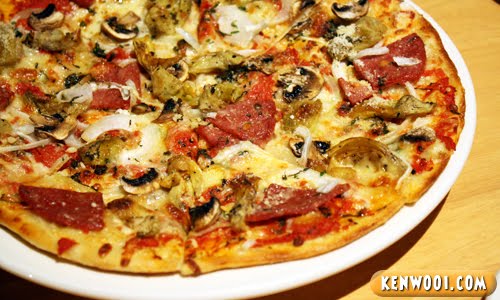 Next up, Four Seasons Pizza. No, it’s not the seasons of Summer, Autumn, Winter and Spring – it actually consists of 4 main ingredients – tomatoes, artichoke hearts, salami and mushroom. Quite a mixture there, but it’s worth trying. 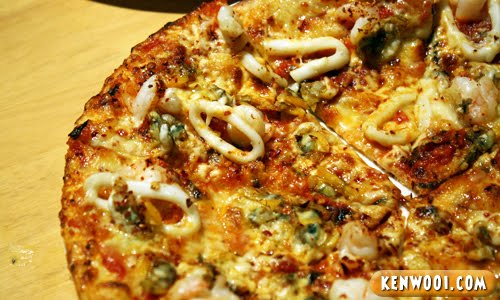 The Spicy Seafood Pizza comes after that. Took a slice and my, that is actually spicy – gobbled it up and that’s enough of spiciness to handle. Nevertheless, I believe that the various seafood compliments well with the spiciness of the marinara sauce. 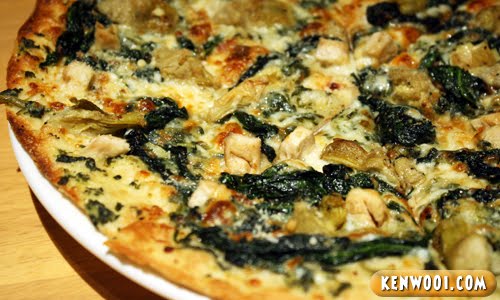 The last pizza was Roasted Artichoke and Spinach Pizza. Topped with greens, this could be a favourite for those who fancy vegetables. Tastes just okay to me.

And finally, the dessert of the night… 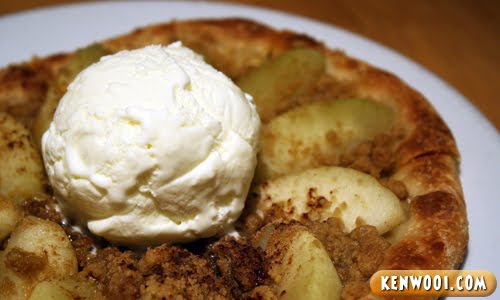 Finally something cooling – the Warm Apple Pie Pizza. Prepared with slices of green apples with brown sugar and a scope vanilla ice-cream, it’s quite an innovative creation out of the usual pizza ideas. The combination of the pizza dough, apple and ice-cream blends really well.

So that’s it. Feasting at California Pizza Kitchen was certainly a pizzalicious feast! Nom nom nom. 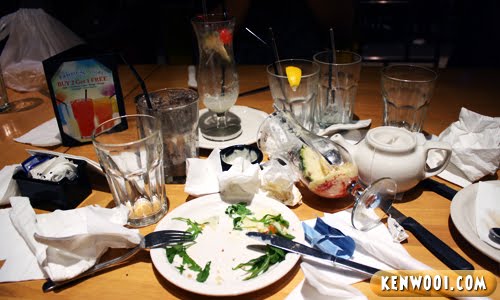 Just look at how messy the table was after the meal. I guess the messier the table is, the more enjoyable the food is. :)