To many, Kuching sounds like a fun place to be. Well, it’s true but I beg to differ slightly – it’s a fun place IF and only IF you’re here for a short holiday trip.

However, if it’s a business trip for almost a month – no, definitely not. It’s bound to be less fun. Furthermore, this is the very first time I set foot on the Land of Cat. 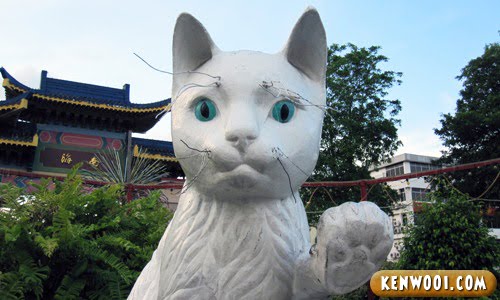 Know what, I could almost turn into a local Kuchingite within that period. Almost, I guess. Meow?

Anyway, here in Kuching, my project team and I stayed at Kasuma Resort. It’s an apartment and according to the local, it’s located at a far away land in Kuching.

They either don’t know where it is, or never knew of its existence. 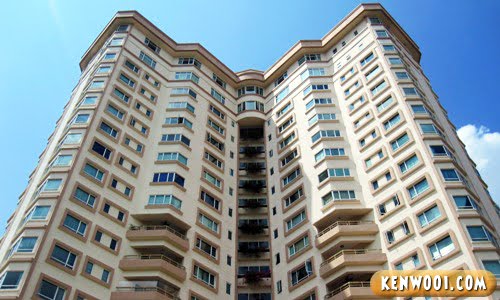 Despite not being able to stay in a cozy hotel, Kasuma Resort is good enough. From the exterior, it looks fit for human habitation – at least it’s not some dodgy place.

Let me show you around. This is the living room… 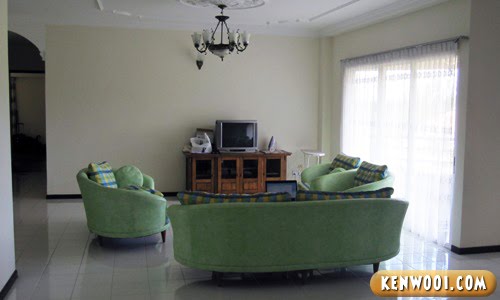 Here’s the work table, the place where I spent most of the time facing the computer… 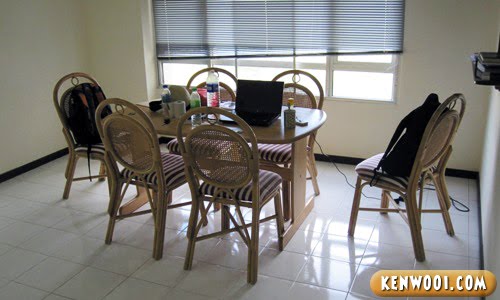 Within the Kasuma Resort vicinity, there’s a beautiful lake… 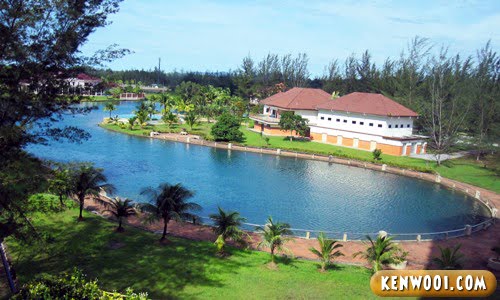 So beautiful that the mermaids actually live there. Okay, not true.

Also, some condom boxes lying around the apartment… 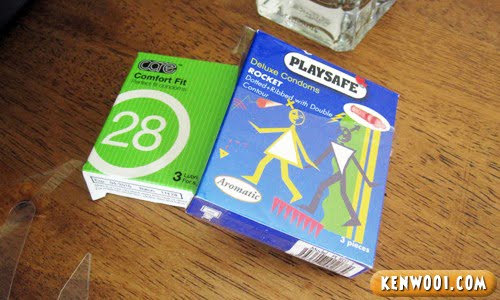 Uhh… don’t look at me. Those aren’t mine – it belongs to the other male colleagues! They’re the ones having a great time in Kuching. I’m sure.

Even though the apartment unit looks nice and well-maintained, it’s actually quite dusty. So I swept the floor on my own initiative – just look dust and dirt… 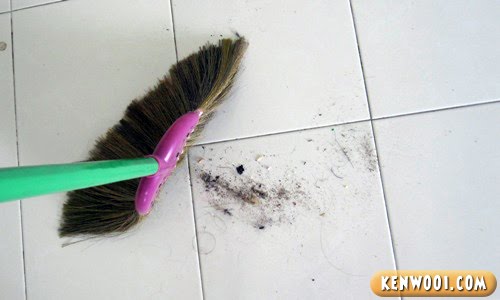 I think because of this, I fell sick for almost a week. Cough and flu, just hate it.

Nevertheless, days gone by and it has been almost 4 weeks in Kuching – everyday work as usual. 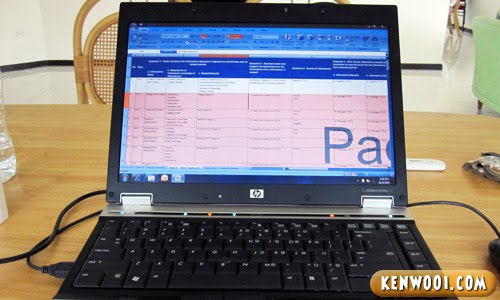 Sometimes I even have to work over the weekends. It’s like being on standby 24/7.

Working at the client’s place was alright. The only thing I find interesting is inside the toilet. They actually labelled all the urinals and cubicles. 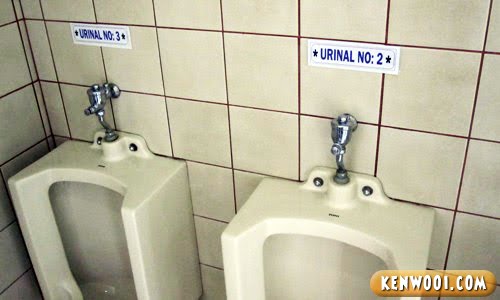 It’s so organized and well-displayed, that my manager once called while I was taking a pee. What do to, gotta answer mah. So… 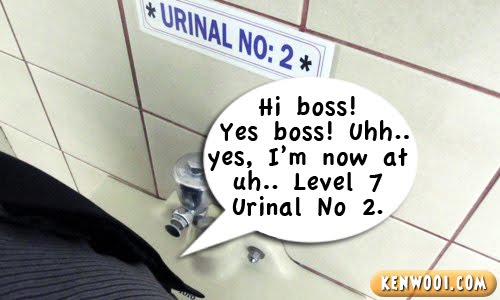 Anyway, one thing that particularly suck in Kuching is none other than the Internet Broadband – Maxis Broadband to be exact. It’s super slow. 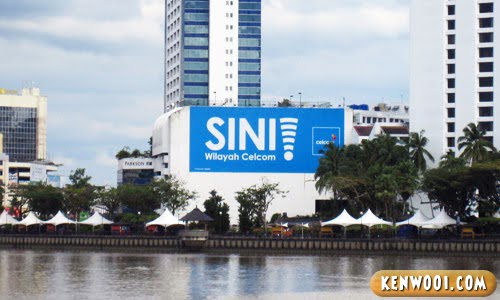 Maxis and DiGi no chance bah.

Well, all work and no play is no fun. Despite having to commit to work, I had my time out – especially during the weekends. 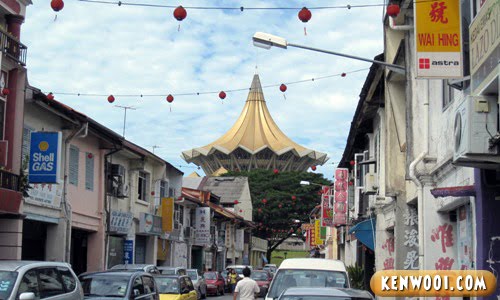 Went around the city, looked at buildings but basically there’s not much to see in Kuching. 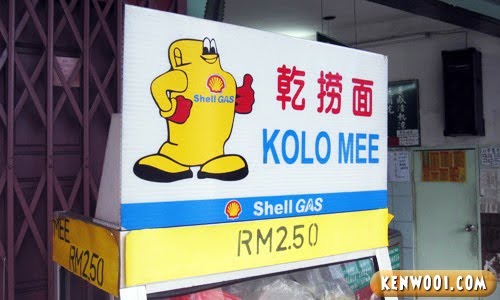 Read more about my CATastrophic take on Kolo Mee, Sarawak Laksa and more Kuching food! It will make you drool. ;)

By the way, I gotta say that the sky in Kuching is really beautiful. On a good sunny day, the sky can be a breathtaking view. 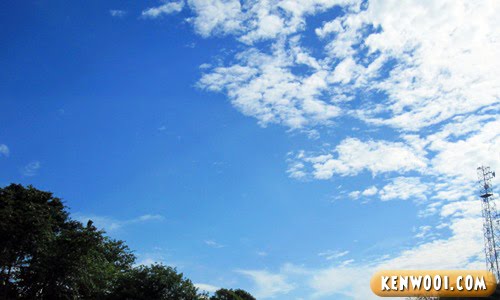 It’s so blue, the Smurfs could consider Kuching as a place to live. Lalala.

Besides Kuching, I also flew over to Miri (for the first time too) for a quick work assignment. Dropped by client’s place, worked things out and 6 hours later – I hopped on the return flight to Kuching. 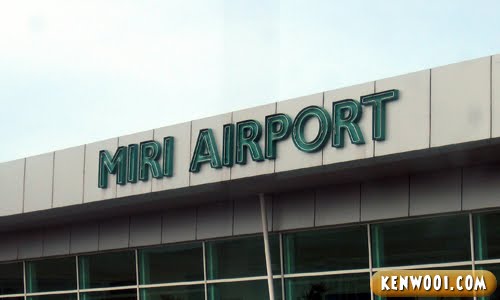 Miri must be the furthest place I’ve been to in 2011. Unfortunately I didn’t get to explore the city.

Anyway, being in Kuching this long means adjusting myself to an unfamiliar place. Work can be tiring and it’s important to have a good rest. 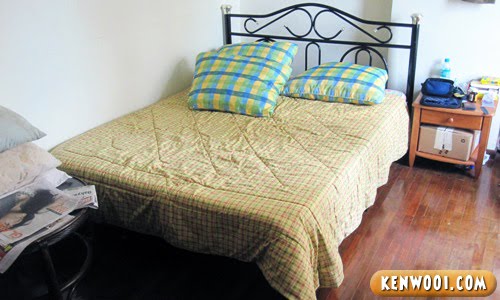 This is suppose to be my bed, shared with a colleague. I slept here for the first few days but due to the smell of “wooden” stench and the air-conditioner that produces warm instead of cool air, I find it hard to continue sleeping in this room.

The problem is, all the other rooms are already occupied.

So the only solution is to sleep on the sofa in the living room. 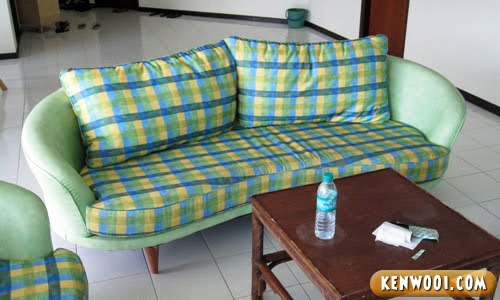 Yeap, I’ve been sleeping on this very couch since then. The air here is much neutral and the sofa is super comfortable.

Oh wait, I’m not sure if my male colleagues did anything kinky on the sofa before though. No stop, I’m not gonna think about it.

But one thing’s for sure, I sure hope my colleagues don’t see me sleeping like this… 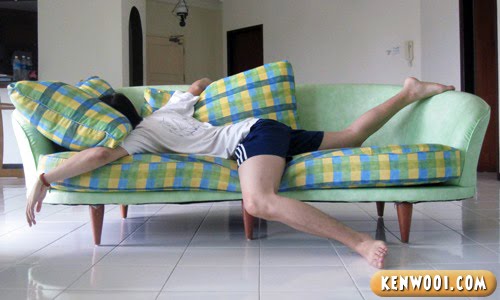 So yeah, I’m flying back to Peninsular soon, like finally! Bye Kuching! :)