I was in Kuching for almost the whole of November – for work commitment. Since it was my first time there, I was told to try several Kuching food.

Ken, you must eat this.. then try that, nom those.. yummy yummy! 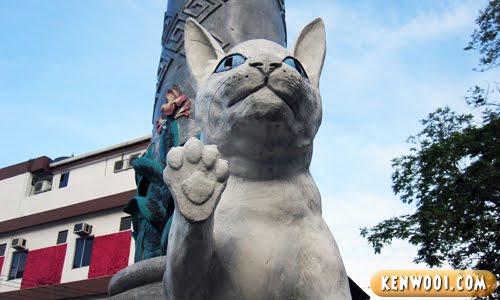 Even the cat statue in Kuching gives the “Thou shalt eat Kuching food!” impression, especially the stare and the hand paw gesture.

Eventually, typical Kuching food was always on the menu – some with colleagues, and for the rest – you gotta thank Sherrie from Cutebun for bringing me around exploring Kuching’s delicacies.

First up – the one that everyone has been mentioning – Kolo Mee! 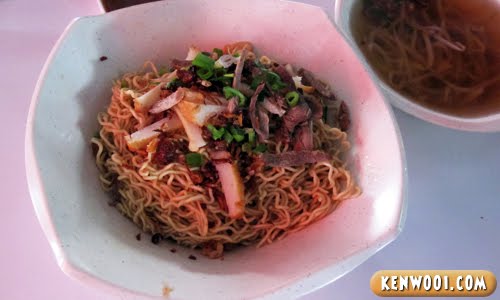 Kolo Mee #1 – The first ever Kolo Mee I tried. It tasted just okay, so I was wondering – was I at the wrong eatery, or does it generally taste ordinary?

I actually hoped it’s the former, and yes – it wasn’t the right place. 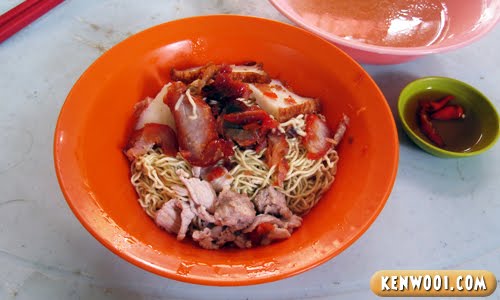 Kolo Mee #2 – Had this at a mini food court along Carpenter Street. With 3 types of pork meat, it tasted definitely better than the first one. No prize given for guessing why. ;) 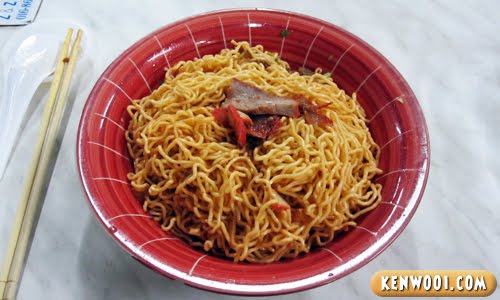 Kolo Mee #3 – Ahh, this has got to be the best kolo mee I’ve tried so far. It’s located at 3rd Mile, stall #8 at a food court (which I have no idea where exactly). The addition of red char siew sauce was delicious and the noodles were bouncy and tasty! 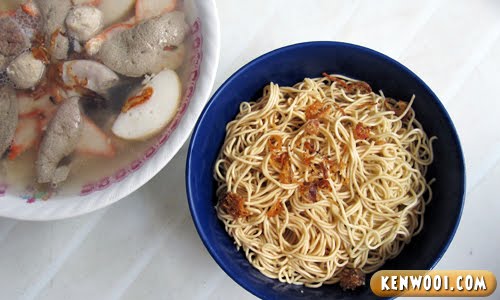 Kolo Mee #4 – This one was served with pork soup at Sin Min Joo, Bishopsgate Street. Since it’s so famous, we actually waited 1 and a half hours for this.

Oh well, service wasn’t that efficient and the dish tasted just okay to me. I’m not a fan of pork internal organs anyway. 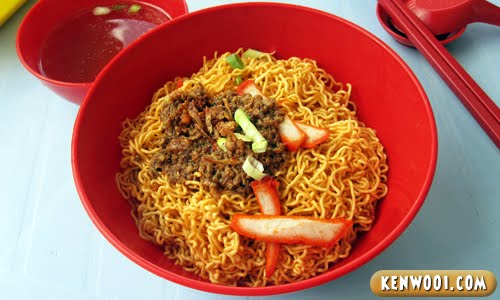 Kolo Mee #5 – This was the last kolo mee I had before returning to Peninsular. Can’t remember the name of the eatery, but my taste buds say it’s 2nd best to kolo mee #3.

Alright, enough with Kolo Mee. Now, the next craving in Kuching has got to be the Sarawak Laksa. 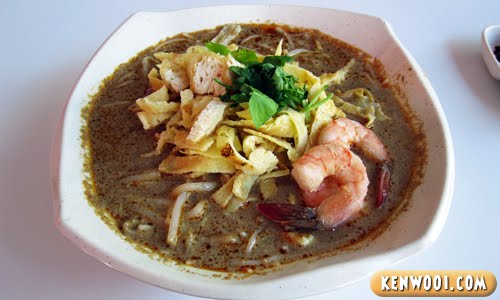 Sarawak Laksa #1 – I had this at the same eatery as Kolo Mee #1. My colleagues like to come here, I don’t know why. Small portion, but the combination of spices used for the soup is nice. 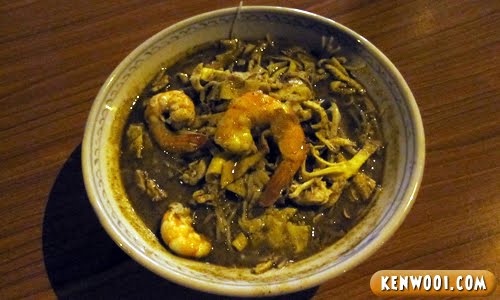 Sarawak Laksa #2 – Another Sarawak Laksa from Mom’s Laksa. Tastes fine – another of my colleagues’ favourite place. 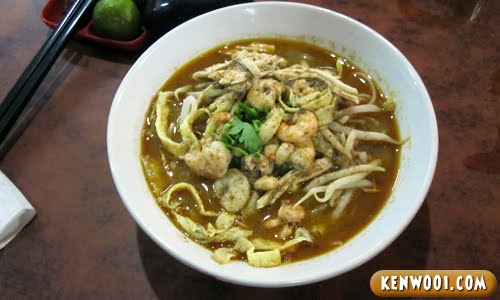 Sarawak Laksa #3 – This one… not sure where I took this photo from. Just another Sarawak Laksa. 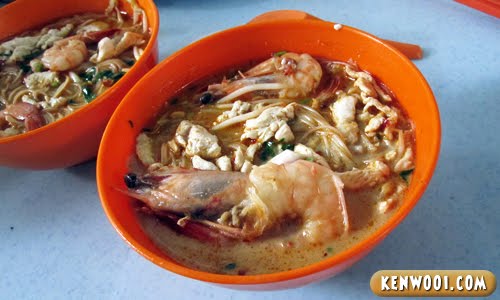 Sarawak Laksa #4 – This one, on the other hand, I remember! It’s from Golden Arch Cafe. According to Sherrie, it’s Jun Fook‘s favourite place to have Sarawak Laksa.

And yeah, the reason is obvious. The prawns are so much bigger (I ordered large I think?) and the soup tastes distinctively better than the rest. Nom nom! I could come back here for more. :)

Other than that, I had others from here and there around Kuching. 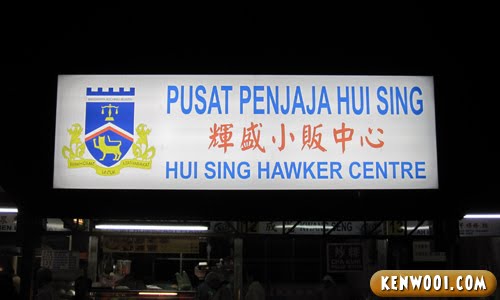 Hui Sing Hawker Centre was one of them. 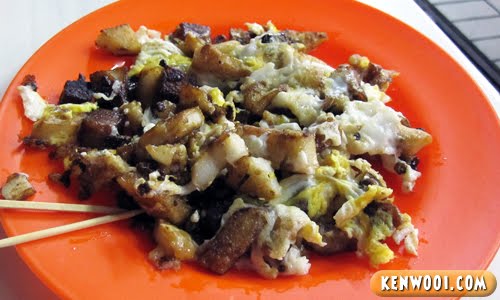 Char Kueh, combination of savory and salted ones mixed with eggs. I like! 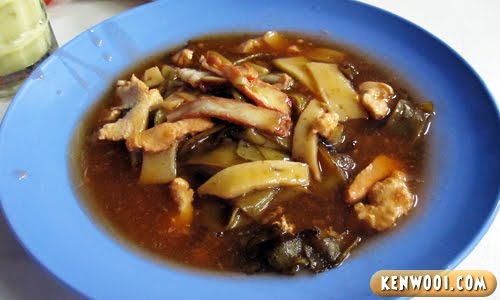 Then, I ate Kio Chap, also known as Tomato Noodles, which is one of Kuching’s specialities. The kueh teow is cooked in thick tomato gravy, with additional ingredients such as pork meat.

On another day, I was brought to Lim Hock Ann Seafood in Buntal Village, it’s about 10 minutes drive from Damai Beach. 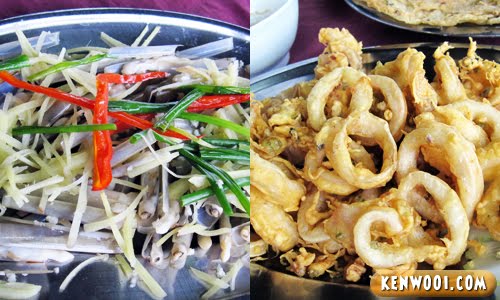 I didn’t know Kuching is known for seafood as well. Since my initial geographical knowledge of Kuching wasn’t extensive, I learnt that the city of Kuching is actually near to the sea.

One dish I particularly love is the Oyster Omelette (or Pancake, some refer). In Kuching, the oyster omelette is slightly crispy like crackers. 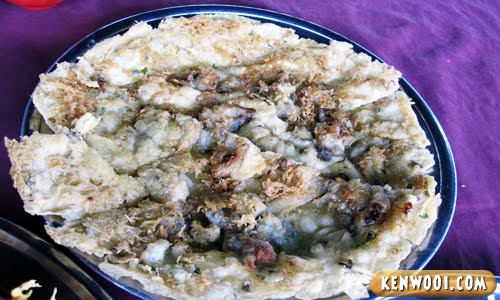 This one in Lim Hock Ann is surely a dish to be savored. As you can see, the ingredients are all mixed well.

But at several places within the city centre, this is what you might get if you order the Oyster Pancake… 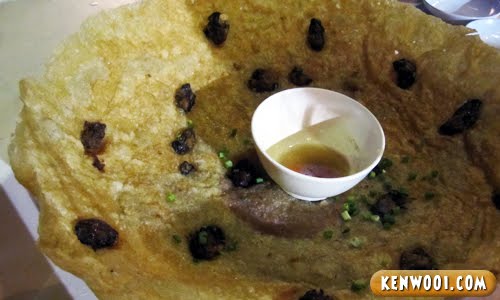 Another variation at Top Spot Food Court. Unlike the one above, this is really crispy with spots of oysters. Presentation wise, quite interesting – but it’s really no match against Lim Hock Ann’s.

Anyway, the Layer Cakes (or locally known as Kek Lapis) are also hot-selling in Kuching. 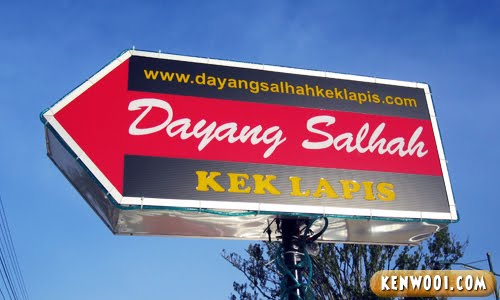 My colleagues love kek lapis – they bought many back to Peninsular. An ordinary one costs about RM10 while the more flavoursome ones are priced up to RM25.

Patrons are even served with slices of each flavours – for tasting purpose. Some tastes really nice, specially the ones with cheese. 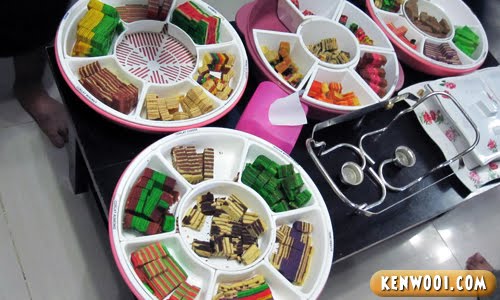 I could actually just grab all and eat for free. :)

Well, that’s all for now. Oh, so few only you say? Actually I had more but I guess it’s sufficient for a blog entry, for now.

Oh by the way, I think I could fit one more – if you wish to try something different other than the typical food, you can always opt for another Kuching speciality. It’s the… 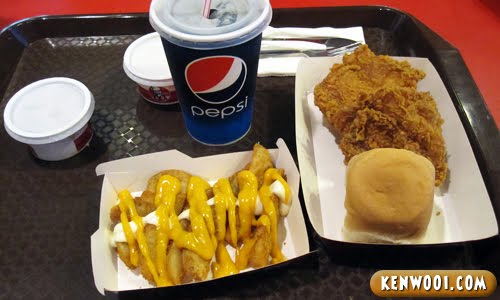 It sure tastes good, I love the cheesy wedges!

Eh… wait a minute! How come I feel like I’ve eaten Kuching Fried Chicken before many, many times? Hmm… that’s uncanny.