I was in Kuching for about a month back in November 2011.

Despite having work commitments on most of the days, I managed to explore the city – all thanks to Sherrie from Cutebun for taking me on a mini tour around Kuching. 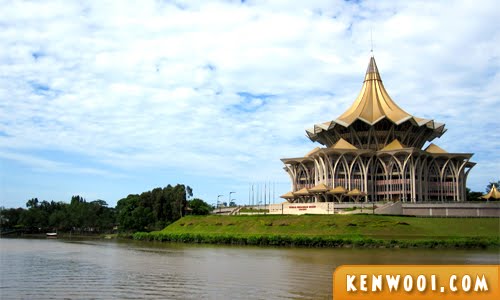 The only landmark that captured my attention has got to be the Kuching State Legislative Assembly, or also locally known as the Dewan Undangan Negeri. I personally find it fascinating, especially its architecture and the distinctive shape of the roof.

Oh, if you don’t mind me repeating – Kuching has got their own deliciously unique food! 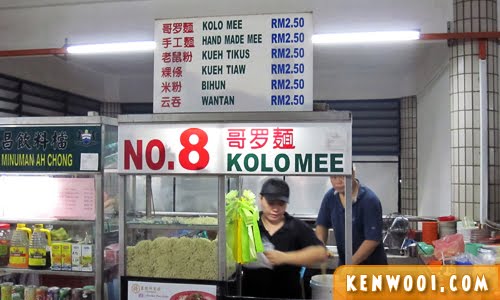 I’ve already tried various versions of Kolo Mee, Sarawak Laksa and more Kuching food. Hopefully to be back there for more – one day! :)

Other than the food, there are a few other places I went to in Kuching. 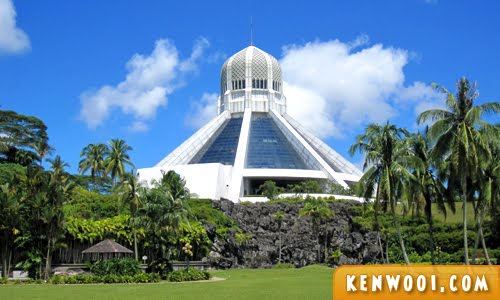 Non-Kuchingites, you can’t say that you have visited Kuching if you didn’t visit the Cat Museum. Yes, it’s located in the UFO-like building.

To be honest, I was pretty excited to see the exhibition of cats. 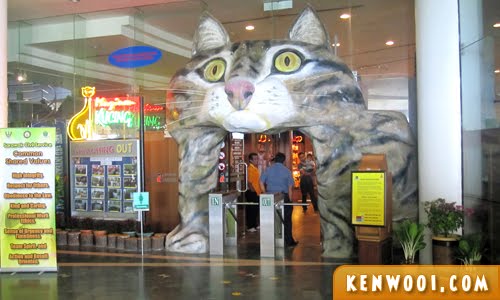 Hey, even the entrance to the Cat Museum is a gigantic mouth of a cat. Got even more excited, can’t wait to mess around with the pussies. Heh.

But when I was about to go in, I saw this notice stating… Those who want to use the camera within the museum… must pay? 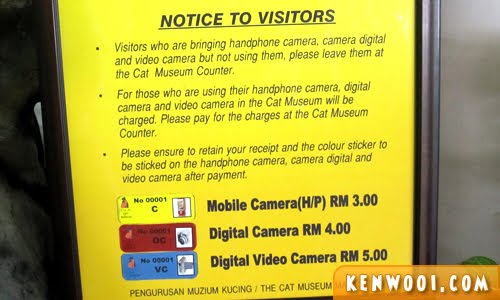 WHAT THE… CAT? What a rip-off leh. So you know what, I decided not to enter at all. Pffttt!

Since I’ve made the statement that “You’ve not visited Kuching if you didn’t visit the Cat Museum” earlier, just screw it.

I have been to Kuching, still! Meow! 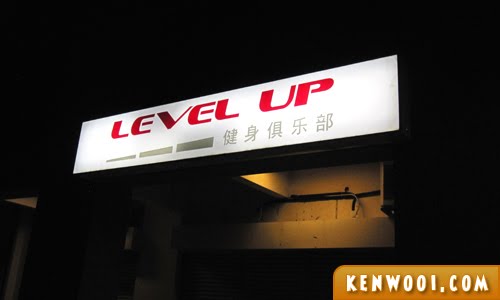 Another place was our ever-famous blogger Kenny Sia’s gym – Level Up.

I went there at night, so it’s obvious that I didn’t enter and say “YO” to Kenny. Just took some photos and then off I go.

On some other weekend, I dropped by the Kuching Civic Centre. 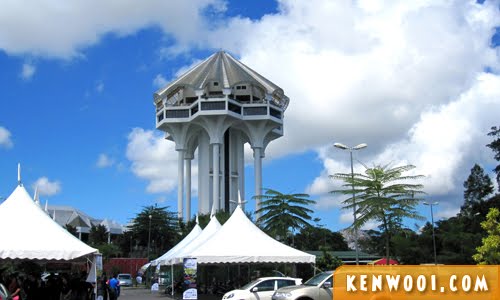 Apparently the cityscape of Kuching can be viewed from the top of the tower. I didn’t go up though. Initially I thought it’s a place where Honda Civic drivers do their gatherings.

Anyway, a beach was on the to-visit itinerary as well. 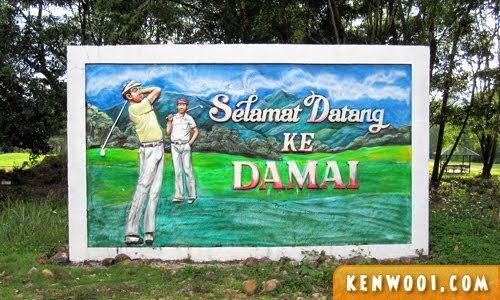 Damai Beach is about 30 to 40 minutes drive from Kuching. Smooth journey all the way, there was no traffic whatsoever.

To be honest, I was looking forward to see interesting stuffs at the beach. You know, like beach activities and… hot girls in bikinis? ;)

But when I reached there… 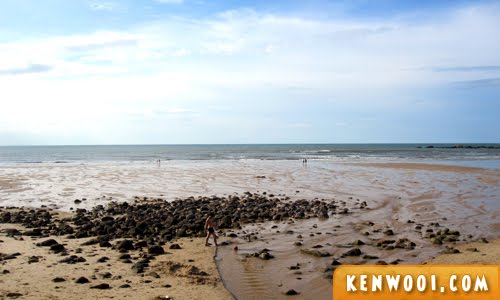 This must be some kind of reserved beach, kept perfectly well – maybe that’s why it’s a really beautiful beach. And Mount Santubong is literally just beside the beach. 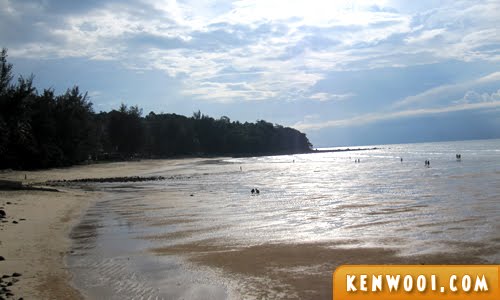 So, there are no signs of any beach activities at all – parasailing, banana boats, speed boats and chicks running around with bikinis. None. Just sounds of the waves hitting the shores of the beach. Peaceful indeed.

I guess that’s the reason why no one comes here? Well, that doesn’t include tourists like me lah.

Anyway, back to the city… 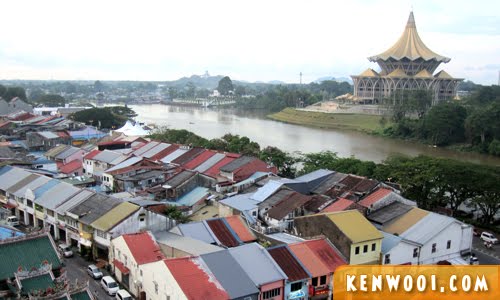 This view is pretty common. Every tourist must have taken a photo like this right? A nice view of the buildings with colorful roofs with the State Legislative Assembly standing proud at the background. 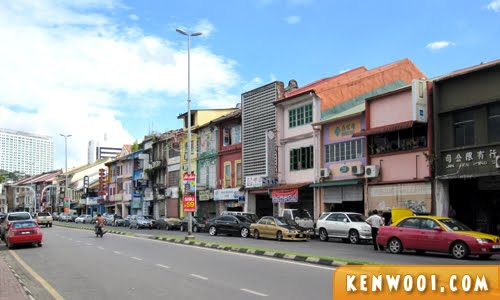 I may not have covered most of the places in Kuching – but overall, it’s a nice city. Yes, there are a number of adventurous activities nearby Kuching but I wasn’t equipped for that.

Oh by the way, one of the must-visit location in Kuching is definitely the famous white cat statue. 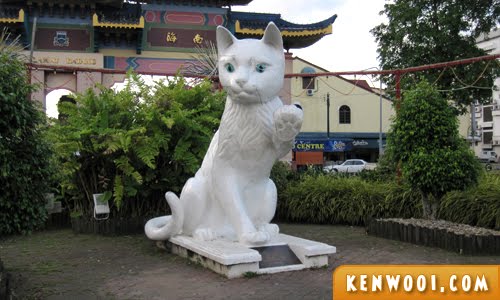 Today, I’m gonna show you how to pose with the cat – especially for tourists. There are 3 main poses to perform on the cat…

First, is the… “Conqueror Pose“! 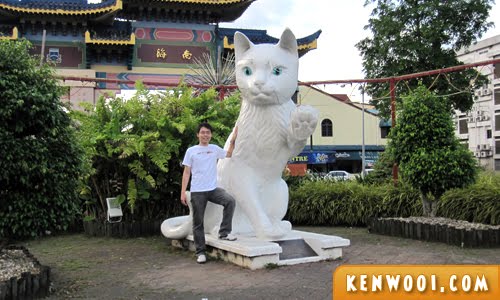 I came, I saw, I tamed the Kitteh, and I took a photo with the big white cat in Kuching!

The second is the… “Cool Pose”! 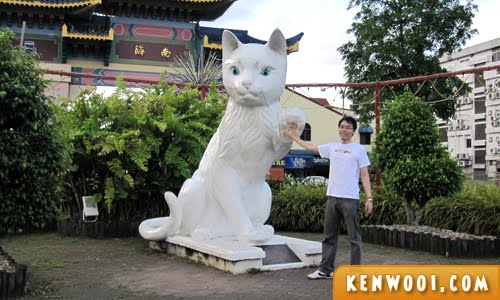 And the third and last one… the “Love Pose”! 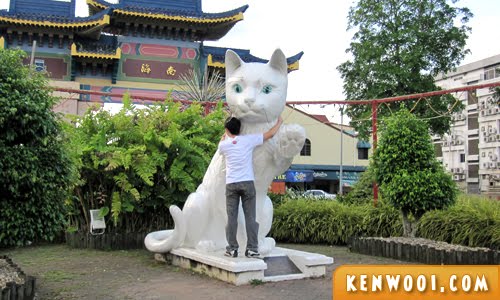 22 thoughts on “Posing With the Cat in Kuching”