So as promised, the “Behind the Scenes” entry for kenwooi.com Valentine’s Day Special – How To Suck at a Dinner Date! (Check it out if you have not) 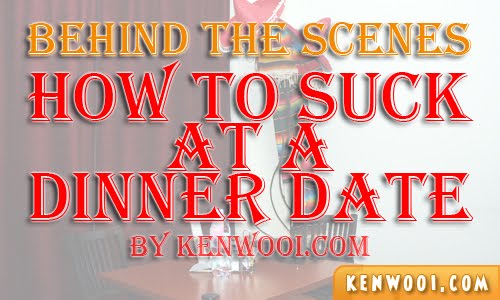 Anyway, it all started with a small idea at the beginning of the year.

Valentine’s Day was just around the corner, and it’d be cool if kenwooi.com could come up with something interesting. After the quick self mini brainstorming session, I got the idea.

But then, there was 1 thing missing – a female partner in crime. 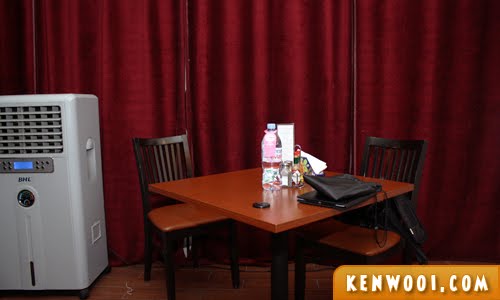 But yeah, obviously I found her.

So, the photo shoot wasn’t as simple as just entering a restaurant and start shooting. In fact, the preparation done 1 night earlier. I dropped by the restaurant and did some location study.

Preferably the best corner for the photo shoot, and to perform some sample shots and lighting tests. 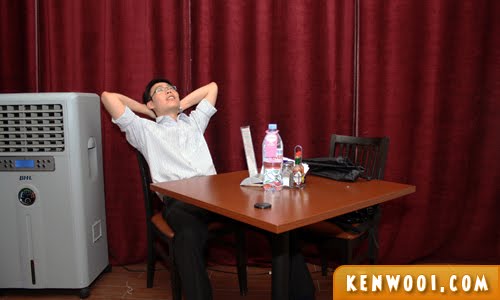 Initially I wanted the corner with orange background, but after a discussion – the other corner with the red curtain seemed like a better option.

It was a fruitful preparation, all thanks to the assistance from Ramesh. And yes, gotta also thank him for giving me the permission to use the restaurant as the location. 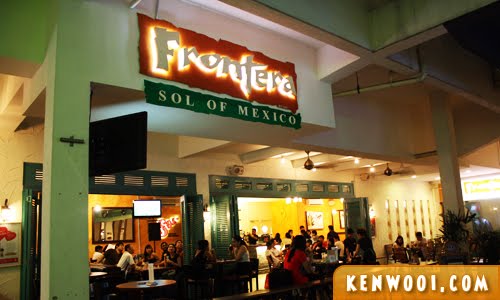 Yeap, it was at Frontera Sol of Mexico, Jaya One over the weekend before Valentine’s Day week.

And on the night that we were suppose to shoot, I didn’t see this coming… 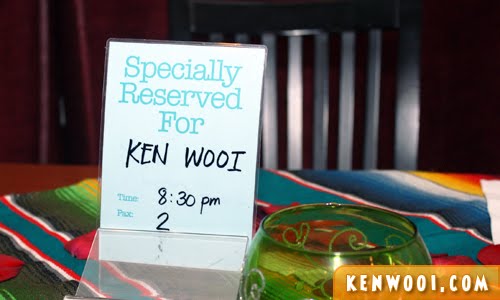 Wow, a table specially reserved for me. Nice.

The table setting was great – loved the colorful table cloth with rose petals scattered over it. 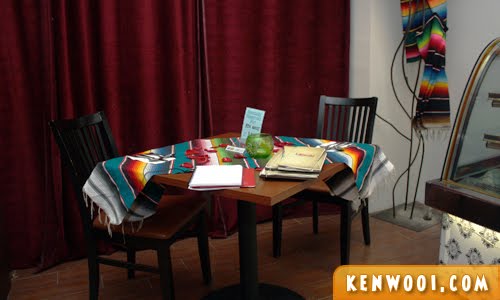 They sure made it look as though it’s a real dinner date. The waitress even thought we ordered some fancy Valentine’s menu, but we didn’t. Nevertheless, appreciate Frontera for the initiative! :)

So, the plan was to take several shots for 10 points on How To Suck at a Dinner Date. 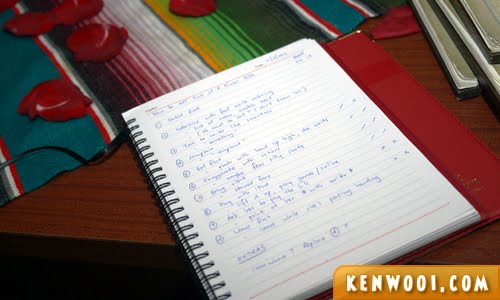 Jotted them down onto a notebook for easy reference.

As we prepare for the photo shoot, there were other customers dining at that time. Some looked at us with curiosity, some even looked at us throughout the shoot.

But the show went on. Just do it! 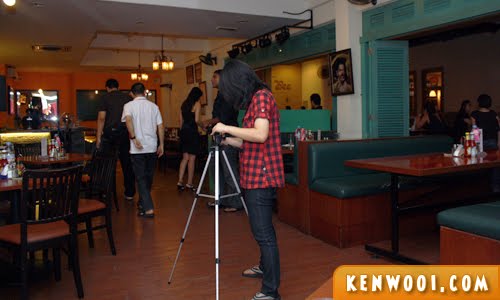 The photographer of the night. All looking pro with the tripod.

And once the camera was set up, my partner in crime and I went on with the poses. 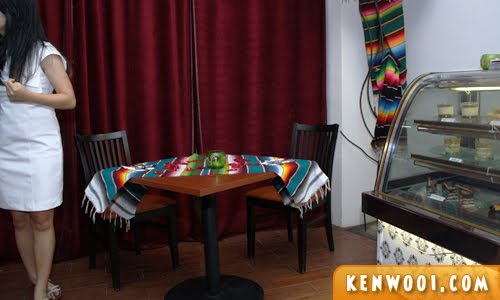 Just so you know, it was her first time doing something like this. She was pretty nervous, but I’m sure we all know that she managed to pull it off with her facial expressions.

Even Merryn commented – “The girl’s expression is priceless! She acts better than you Ken!”. But wait a minute, how can a newbie be better than a seasoned poser like me right? Oh well…

Along the way, we did various poses. Multiple shots for a single point so that we could get the best pose and facial expression. 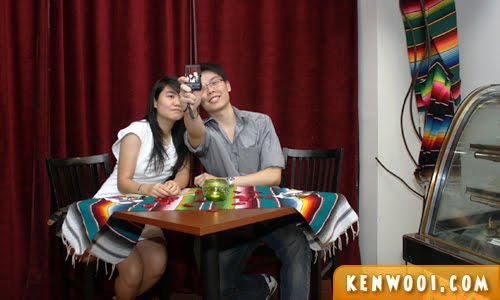 There was one with the self-camwhore. But we also decided to do a proper together-camwhore. The photo on the compact camera turned out to be blur though.

I suck at angling and holding the camera like that. 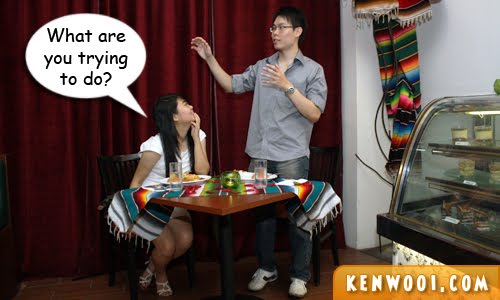 Then there were times when I had to think on-the-spot on how to come up with silly poses. We had a shot of me ‘singing’ to her, but I guess it wasn’t sucky enough. :P

And you know what, too much thinking on-the-go makes me all stressed up. Hence… 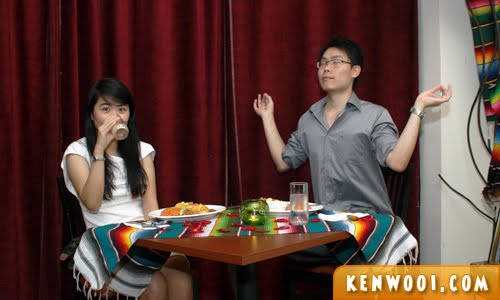 Felt so much better after that. Heh.

Anyway, the fun part was when we had one of the waitresses to appear on the scene with us – as the waitress. Duh! 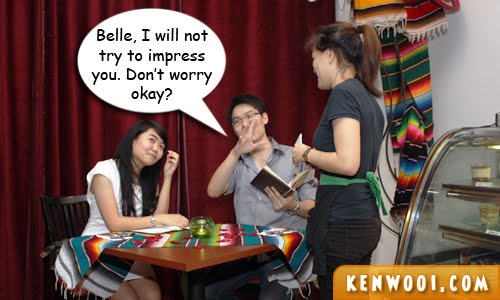 Her name is Belle. Belle, say “Hi” in the comment section below if you’re reading this! :)

Initially, she thought it was a video shoot, but I explained to her that it’s all just photos. Therefore, she neither need to act nor speak – just pose!

Despite her cameo role, she executed it very well. 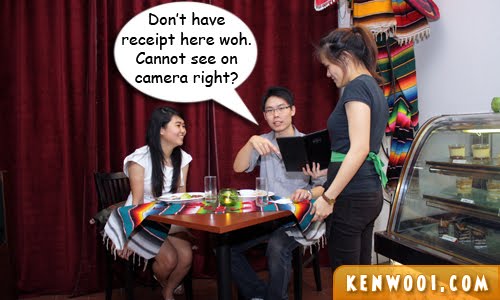 Oh wait, coz she’s already a waitress there after all, right? Haha!

Anyway, I didn’t manage to capture the photos of the main courses we had that night. 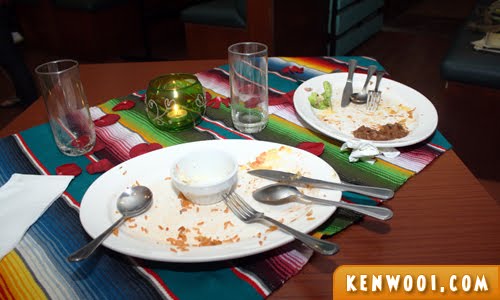 Was too engrossed with the whole production and unintentionally started consuming the food without taking photos first.

For dessert, we had the Cheesecake Chimichanga. 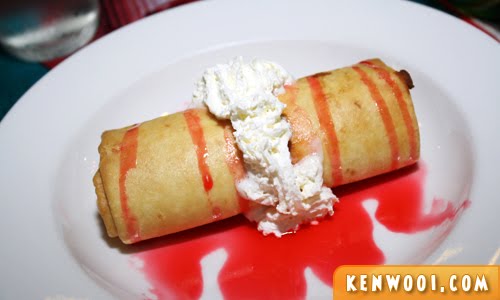 Ah, this time I remember to take the photo first. ;)

Anyway, I’d like to take this opportunity to credit those who’ve made How To Suck at A Dinner Date all possible. 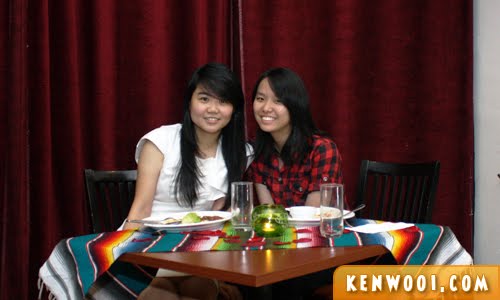 And last but not least, a group photo of the production crew… 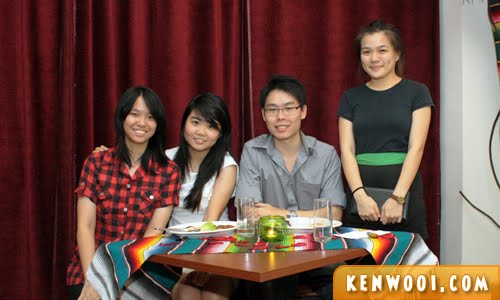 Okay, what now? Nothing else right? Any questions? No?

18 thoughts on “Behind the Scenes: How To Suck at A Dinner Date”