So I was at Penang recently, and the Penang Hill (or also known as Bukit Bendera) was the main destination since its tram service was upgraded about a year ago. 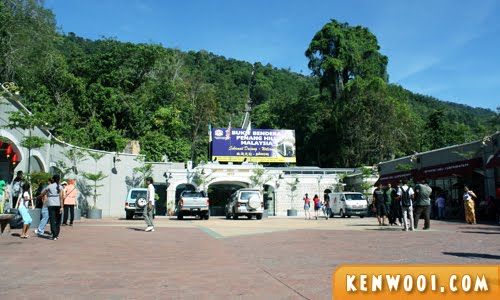 It was a bright and sunny morning, and the last time I went up the Penang Hill was back in 2009.

Once there, we got ourselves return tickets at RM8 each. 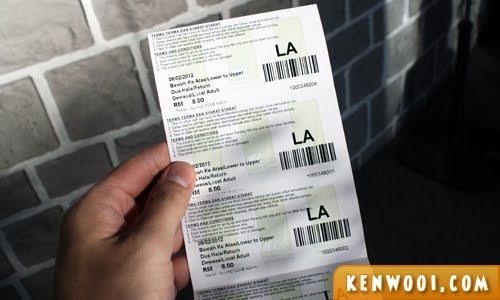 Which is considered cheap, I guess.

But have a look at the rates for Malaysians, provided that you have your MyKad identity card with you… 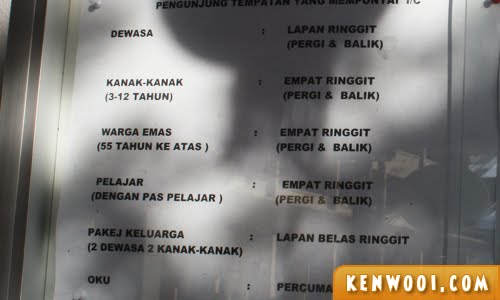 Take note – it’s written in Malay language, and all the price are written in words instead of the numbers.

Why is it so? There must be a reason for doing so, right?

Well well well, take a look at the rates for the foreigners then… 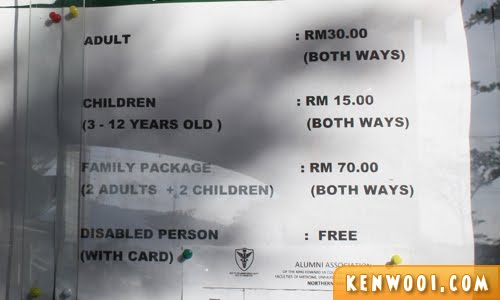 That definitely justifies why the rates for Malaysians are spelled in Malay and written in words – so that the foreigners won’t know the exorbitant price they’re paying. 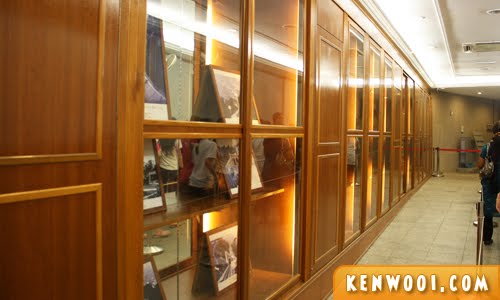 Anyway, there’s a new mini cabinet-cum-museum on the way in. It features historical photos of Penang Hill and small replicas of the trams.

Once at the waiting area, it feels like waiting for the infamous KTM train… 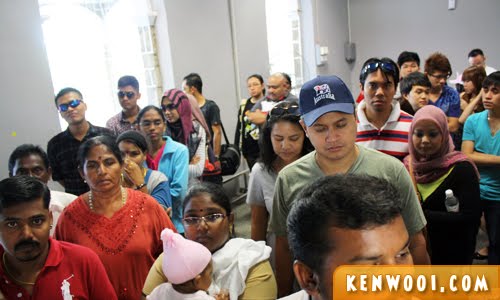 Funny thing about Malaysians is, once the train has arrived, everyone sorta push forward and rush into the cabins. 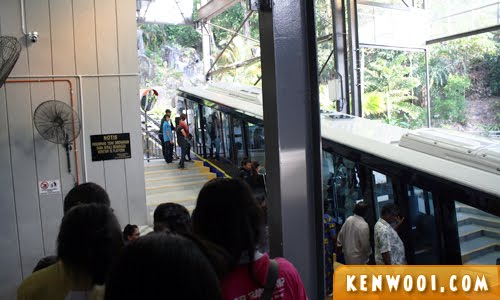 Fortunately enough, we got ourselves into the first cabin. 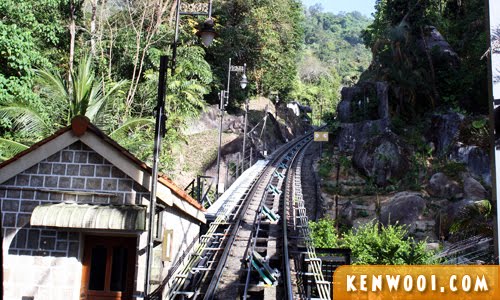 So we could watch the new journey up with the new Swiss-made coach.

Back then with the previous tram, a one-way journey takes around 30 minutes – with a stop in the middle. But now with the new tram, it takes just 5 minutes to reach the top station. 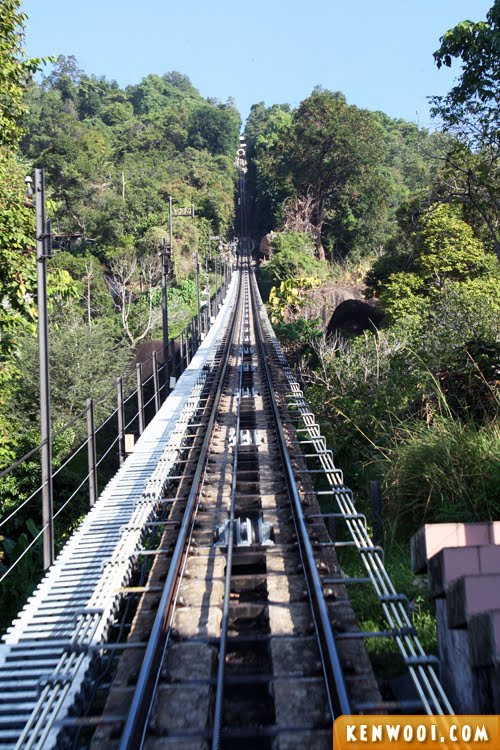 Swift and smooth journey, I’d say. Furthermore the air-conditioned coach made it a more comfortable ride.

At a point during the journey, the previous tram is left stationary for display at the once-used-to-be split railway. 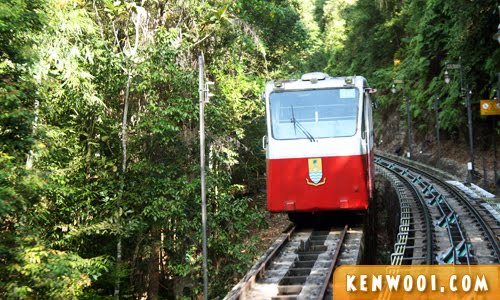 Look at the difference between the new railway and the old one.

So in a jiffy, we reached the top. 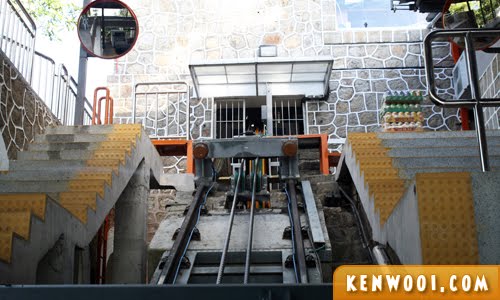 And again, like the usual KTM train service – once at the top station… 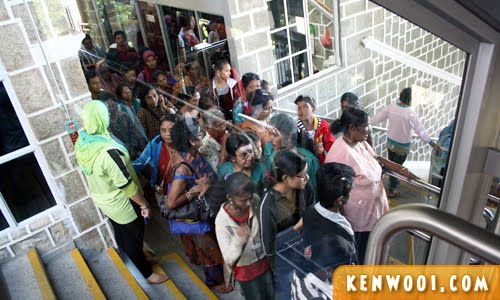 Another crowd is eagerly waiting to board the tram.

Anyway, it was about 9am in the morning when we were up Penang Hill. 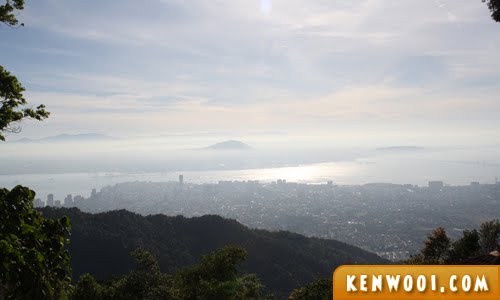 The morning haze in the skyline was still visible – couldn’t capture a good photo with blue sky. Gotta do that in the afternoon but it’d be hot.

Anyway, there are viewing telescopes around this time. 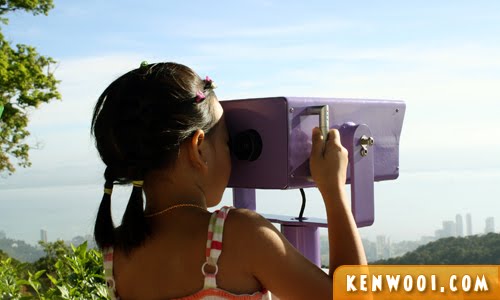 Penang Hill is located about 800 meters above sea level and up there, visitors can witness the cityscape view of George Town.

Here’s the view of the other side on Penang Hill. 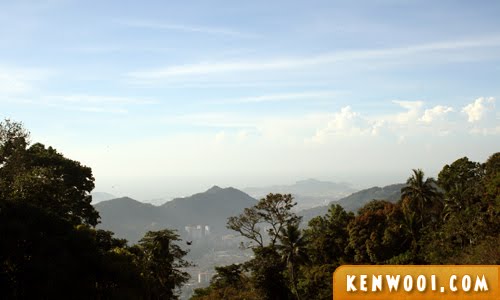 As compared to my previous visit, the atmosphere isn’t as cool anymore. It’s pretty warm actually, especially with the gazing morning sun. So warm, can sweat.

The Penang Bridge can be seen from the Penang Hill too. Not clear in the photo though. 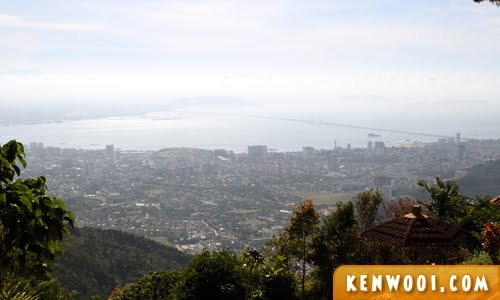 Anyway, there are buggy ride services too at the top of Penang Hill. It’s RM30 for up to 6 people per ride.

You can opt to walk along the internal roads, but since we were lazy – just take the buggy lah. 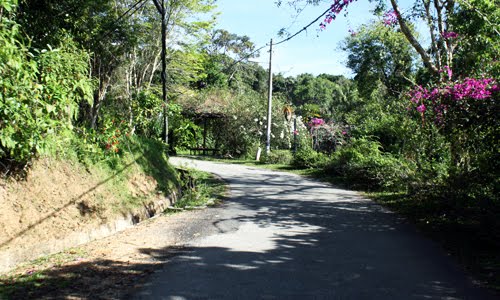 It’s a 4km (can’t verify, but it’s according to the driver) to and fro ride along the road where the bungalows are built.

The time we were there, this was our buggy driver… 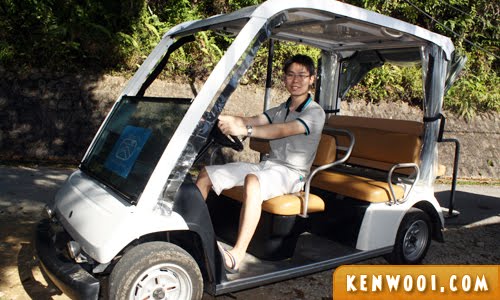 Meet Kenth, he’s from Vietnam. He’s friendly and he has been providing buggy rides at Penang Hill for the past year already.

If you see him there, don’t forget to say Hello! ;)

25 thoughts on “Of New Tram, Buggy Ride and Penang Hill”