It’s the 4th consecutive year the Hot Air Balloon Fiesta is held at Putrajaya – but this year was the 1st time I attended the event. 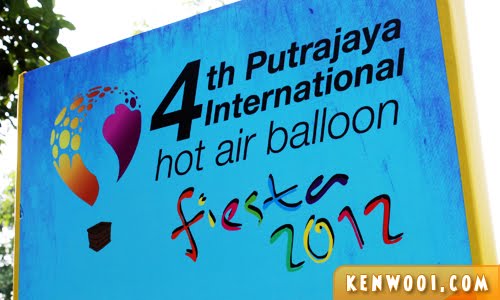 I left home for Putrajaya as early at 6.30am in the morning – hoping to get a good parking space, enjoy the morning atmosphere, and avoid the predictable crowd. 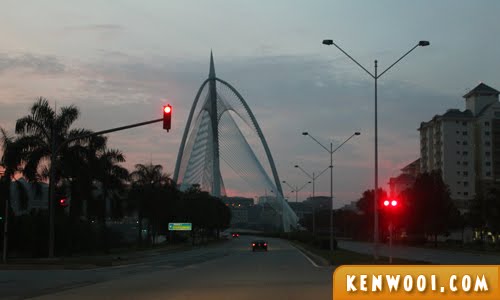 There was also another main objective of reaching that early – I wanted to get the tickets to the morning hot air balloon ride. According to the schedule, the ticketing booth operates at 7.30am.

But oh boy, I was proved wrong… 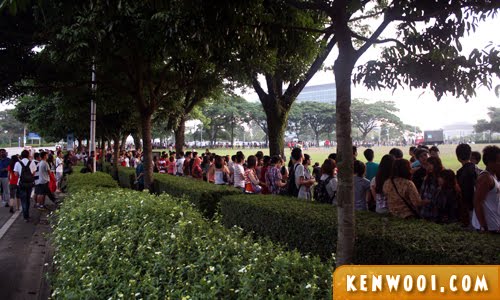 At 7am, a super long queue was already there. So apparently there were people more kiasu than I am, and the session was only limited to 300 tickets. Obviously I didn’t make it.

I was even told that people started queueing at 4.30am! Too much weh! 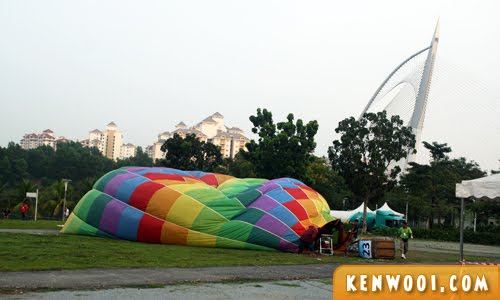 Since I couldn’t get my hands on the tethered balloon rides, I went on to snap photos – the usual thing I do. In fact, everyone does that. Meh.

In the morning, the balloonists and their crews were already preparing the huge hot air balloons. 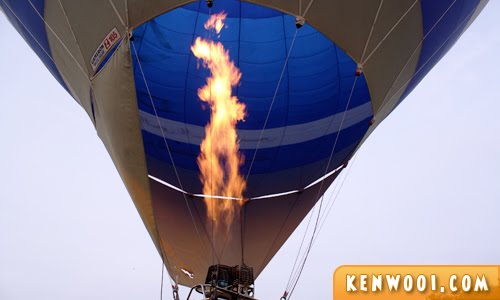 Flames are blasted into the hot air balloon with the burner.

When taking photos while standing near the basket, the intensity of the flame can be felt. Just imagine the heat the balloonist has to endure while operating it.

Once the temperature in the balloon is raised, it makes the balloon lighter than the surrounding air and… 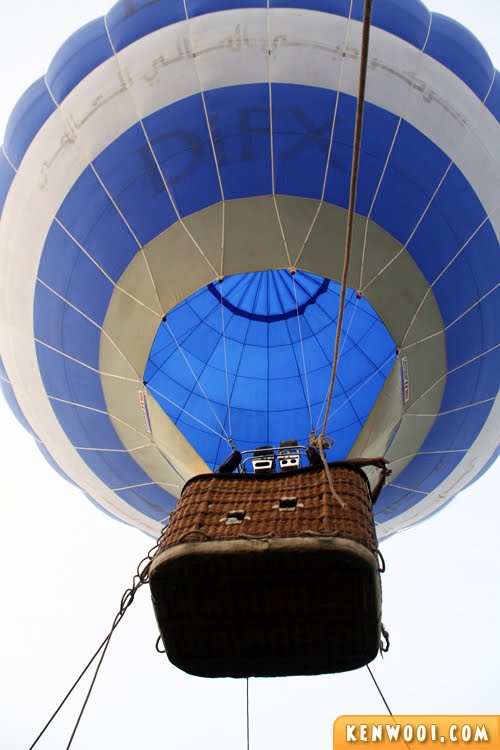 There it goes… the hot air balloon propels up into the air! #amazed :D

Anyway, there were quite a number hot air balloons being exhibited during the festival. 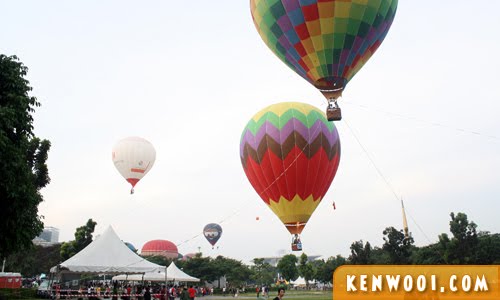 They come in a variety of colors and mostly the the typical “inverted tear drop” shape, while some others are particularly unique.

As expected, there were already a huge crowd in the morning itself. It was a cool Saturday morning, perfect for moving around and taking photos of the magnificent hot air balloons.

Here at the main launching site, the hot air balloons are gathered around. 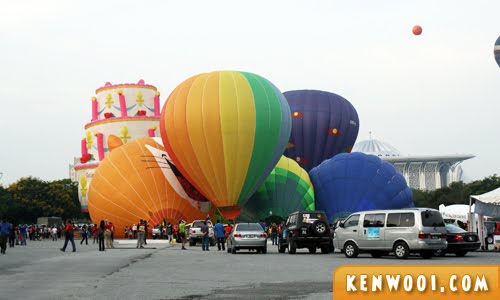 All inflating the balloons and preparing for the morning take off.

There were balloons shaped as a birthday cake, tree stump and some designed with interesting characters such as Felix the Cat. 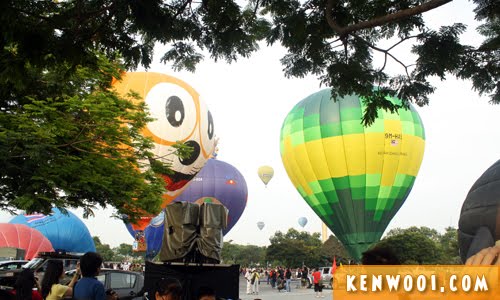 There was also one by our very own Malaysian, which is the green and yellow balloon that represented the state of Kedah – clearly symbolizes the seasonal colors of the paddy field.

As soon as the balloons are inflated, they take off into the sky. 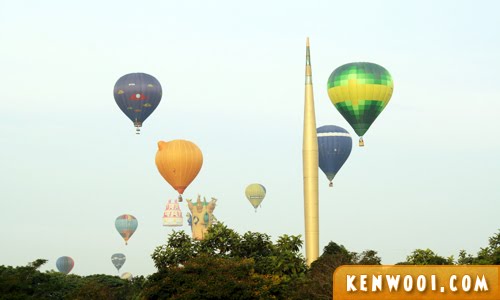 Flying over the land of Putrajaya – it’d be great if patrons are allowed the ride up to the sky instead of being on tethered rides.

Besides that, there’s the Iwi the Kiwi balloon from New Zealand… 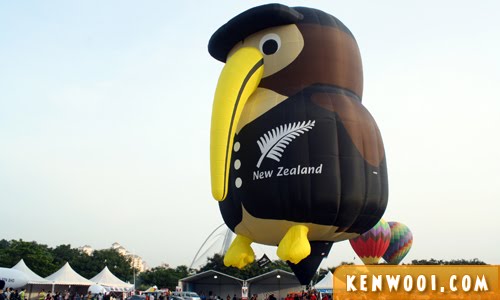 If you could notice, the kiwi is pooping colorful shit balloons. 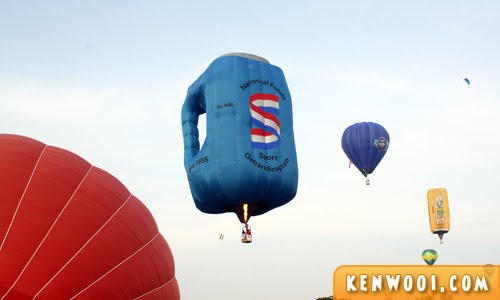 Another unique hot air balloon has to be the Coin Box from the Netherlands. Looks like an oil container to me at first.

Here’s another hot air balloon being flamed up… 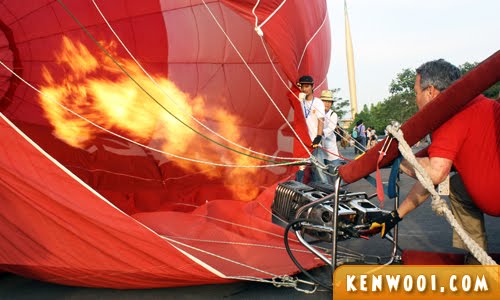 The man is Frank Wecther, from the United States of America. He’s currently on a World Tour representing Emirates Airlines of Dubai.

As simple as the balloon is, it stands out in a way – probably because of its strong red color. 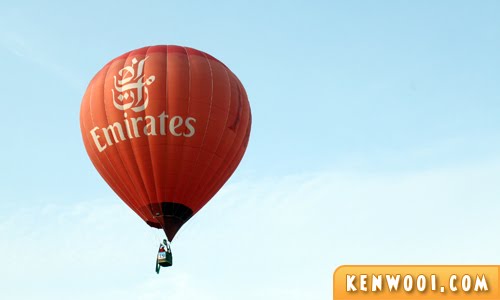 By the way, I was there for almost 15 hours.

Didn’t leave the vicinity at all because I don’t wanna lose my parking slot. So, the only way to kill time was to stroll along the stalls. 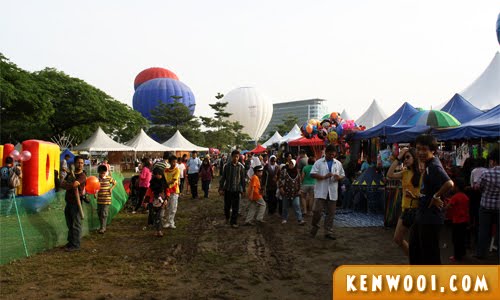 There were kids area for the kids, merchandizes for sales, and most importantly – food and beverage on sale! 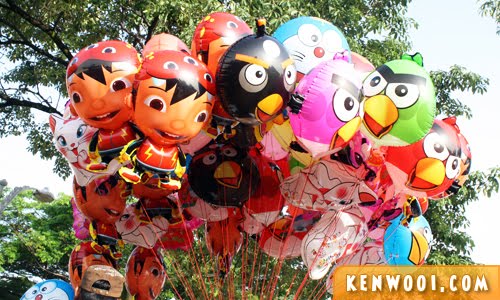 Kids (and certain adults as well) were seen holding on to helium balloons with all sorts of cartoon designs – Angry Bird, Ultraman, Hello Kitty, Doraemon, Tweety Bird, and many more.

Bubble toy guns were another favorite too. 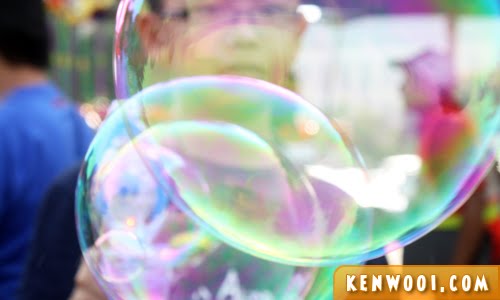 Wherever you go, you see kids (and certain adults as well) spraying bubbles so excitedly. And there are other kids running around, chasing and popping the bubbles in the air.

Other than the kiddy stuffs, there were activities for the grown ups at the Extreme Zone. 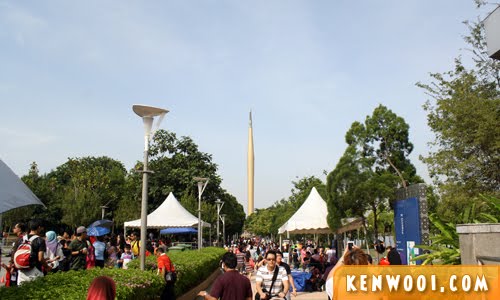 Rock climbing, zorbing, paint ball and rock climbing were some of the activities available.

Oh not forgetting the waterball at the lake too… 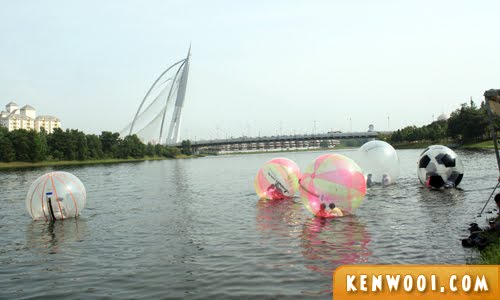 By 10am, it was already scorching hot. The sun was blazing onto the land and people like me would end up getting sun burn.

In fact, I was sun burnt. 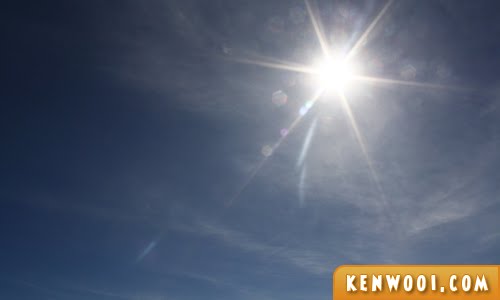 Staying under the sun isn’t my thing. I didn’t even bring an umbrella because having a bulky DSLR camera is already quite a hassle.

All I could think of was to get under a shade, and to drink more water before I get dehydrated. Every part of my body was sweating. :/ 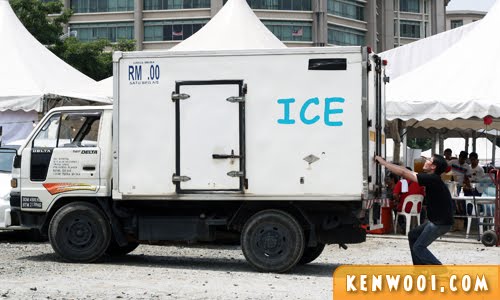 PLEASE LET ME GET INTO THE BIG ICE BOX!

But it was locked, unfortunately. I still survived the heat, nonetheless. ;)

After spending the whole afternoon at the dining area, and talking about everything under the sun (pun intended), it was already evening. 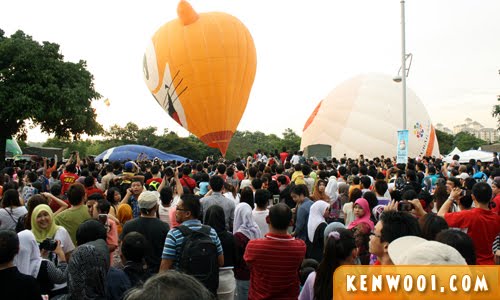 There again, the hot air balloons were being prepped up at the main launching site. One by one they rise.

But hey, just look at the massive crowd – it was like a sea of hot air balloon enthusiasts! 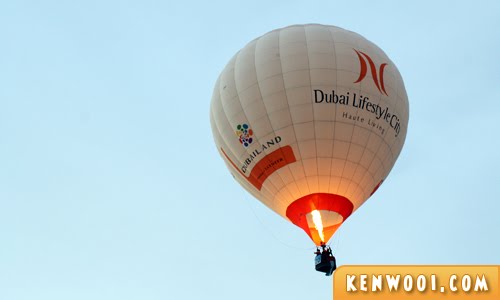 The balloons took off into the sky again for an evening round.

And later that night, the Night Glow event started… 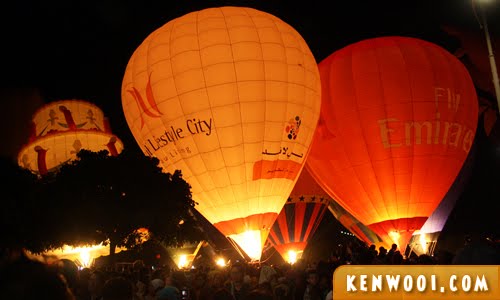 The hot air balloons are lined up at the launching field, served as giant lanterns glowing to the music beat. It wasn’t that synchronized, but it was fun to watch the balloons glowing on ground level.

After that, the show ended with a fireworks display. But unfortunately… 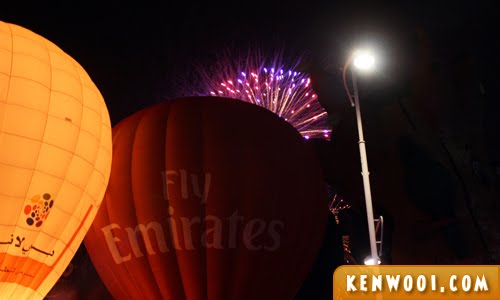 The fireworks were set off on the other side of the launching site, which means the view of the fireworks was blocked by the gigantic hot air balloons.

So… many of us missed what could have been a marvelous fireworks show. :/

And you know what… 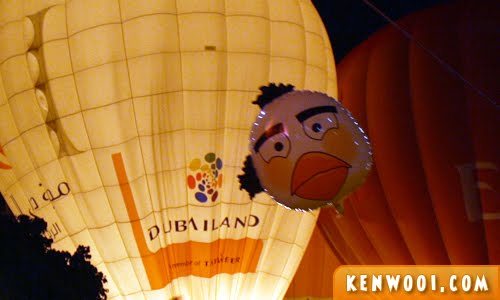 This sad-looking (no longer angry) bird balloon basically summarizes what I felt about the fireworks misfortune. Huhu… oh wells. Next year it shall be!

Nevertheless, it was a tiring yet fun 15 hours (yes, roughly 7am till 10pm) there at the Putrajaya Hot Air Balloon Fiesta! :D