One of my personal aspirations this year is to run at an official marathon. And over the weekend, I’ve successfully achieved it by participating in the 5KM Fun Run at the Standard Chartered KL Marathon 2012! 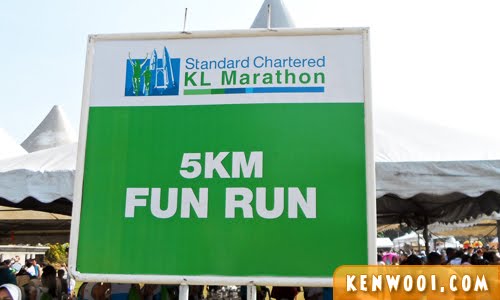 Anyway, I started running at the beginning of the year. I initially thought of running 10KM but the inconsistency of my training made me opt for a shorter (and perhaps easier) distance.

As a result, 5KM was much more practical.

I may not be the best 5KM runner out there, but I’m glad that I made the effort to take the plunge and participate in my first ever 5KM run. 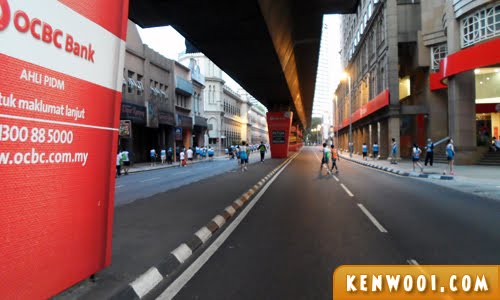 That morning, we reached Masjid Jamek LRT station at about 7am.

By the time we were there, some 42KM and 21KM runners were seen reaching the finishing line at Dataran Merdeka. 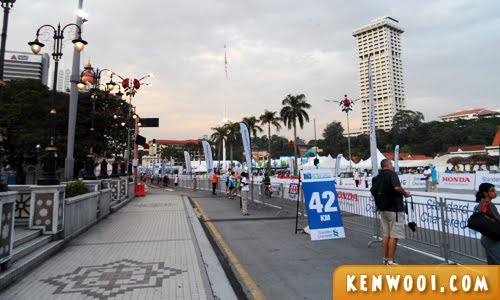 I could only foresee myself running at most 10KM, whereas 21KM and 42KM seem so… distant. It would certainly require extensive, consistent and dedicated training to be one of the elite runners.

Nevertheless, we proceeded to the 5KM and 10KM starting point at Jalan Parlimen. 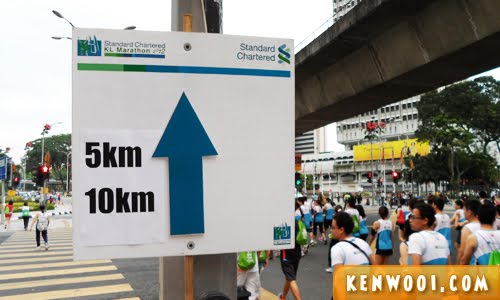 It was quite a distance from Dataran Merdeka, but a relaxing stroll along the free-from-cars road was good after all. Plus, it was a breezy morning. 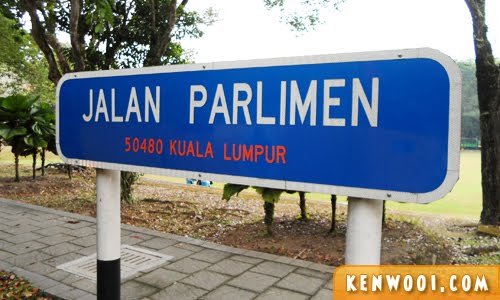 To be honest, my tummy didn’t feel good at that moment. Butterflies in my stomach, I suspect. But I sure hoped that those “butterflies” (if there are) don’t blurt out from my backside while I’m running. Heh! :P

So once the 5KM runners were allowed to enter the starting zone, we went in immediately. The 5KM Fun Run was scheduled to flag-off at 8.45am. 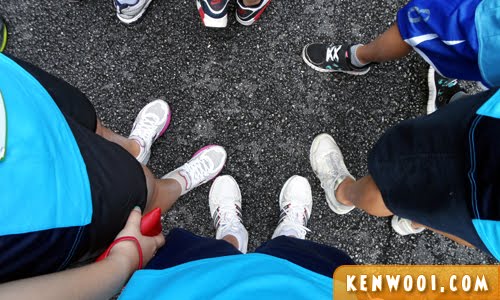 There wasn’t much to do during the wait, besides the arrival of the VIPs. They shook hands with the front-line runners and the Deputy Prime Minister of Malaysia gave a brief “All of us are gathered here today to achieve an objective together, hence Malaysians are united!” speech.

Anyway, as the time lurked closer to 8.45am, it was time for flag-off. 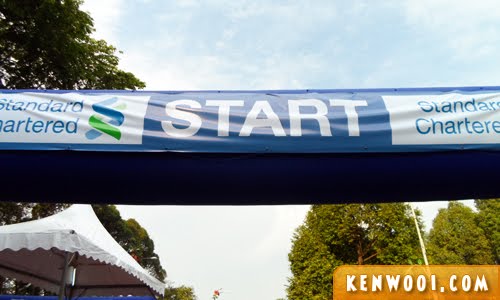 The countdown began, the pistol was shot, and off we go! *excited*

I started off pretty quick, overtaking right from the start. Reaching the 1KM point was a breeze  – perhaps I was still filled with energy.

But as I was heading towards the 2KM point, the steep slope upwards caused me to lose momentum and I started to experience fatigue. All I know was I must get to the 2.5KM point where the water station is situated. 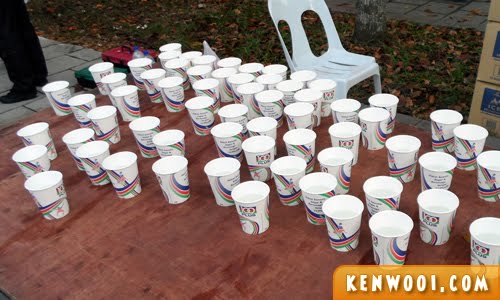 I drank 2 cups of water, my body felt refreshed, and I picked up pace again. As “fun” as the 5KM Fun Run sounds, I took it pretty seriously – I wanted to finish the run in the fastest time as I could.

As much as I wanted to keep running, I had to stop and start walking at certain intervals. Exhaustion was inevitable, but once I got sufficient rest, I continued running – or jog, since it was at a slower pace.

Nevertheless, I reached the 3KM point and it’s less than half way more to go! 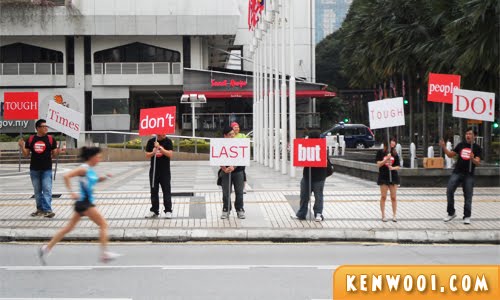 I personally like this quote – Though times don’t last, but tough people do. Besides this collaborative support, I also saw banners that went “Tired legs are sexy” and “Run as if you stole something”.

Cliché you may say, but they really did spark a gush of motivation within me – I want to reach the finishing line!

After a while, the 4KM point sign was seen, and it was then the FINAL kilometer!!! Pushed myself even more and step after step, I could finally see the finishing line and… I crossed it with a great feeling of relief! 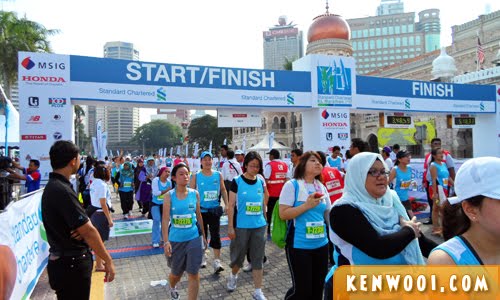 Yeah, I did it! I’ve accomplished my aspiration to “officially” run in the year of 2012.

I had a stopwatch activated throughout the run, but I didn’t check it at all. When I checked it after finishing the run, 41 minutes was displayed on the screen.

So, I finished 5KM in 41 minutes. Well, could have been better – no doubt about that. But sometimes, it doesn’t matter how long you take, as long as you’ve completed what you’ve aspired to accomplish. 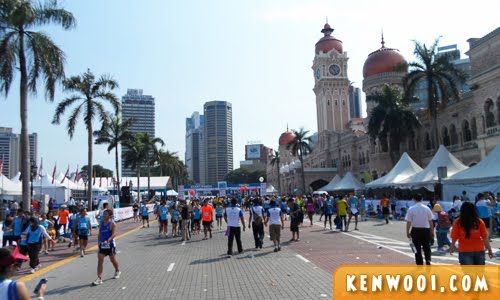 At 9.30am in the morning, the 5KM run was basically over for us.

We then went to the Checkout Zone to collect some refreshments and the finisher’s certificate! 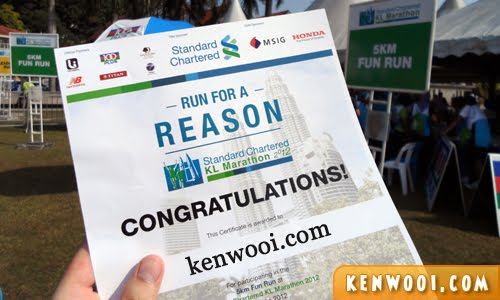 Unlike the longer runs, the 5KM finishers don’t get an additional finisher’s medal. But a certificate is definitely worthwhile for me – for now. ;) 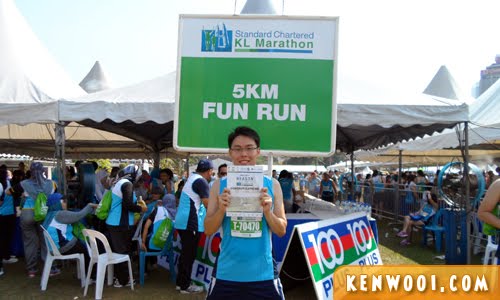 This is me with the 5KM Fun Run board and my finisher’s certificate. Duh!

Perhaps in the near future, I’d aspire to take on a double – the 10KM run! 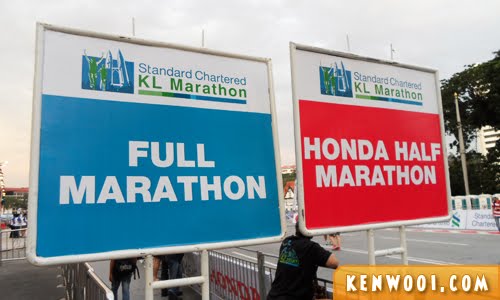 And perhaps in the far off future, I hope that I’d be able to conquer the half marathon. And oh, the full marathon… I wouldn’t even consider. It’d surely be a massive feat!

But as of now, I’m glad to have accomplished what I’ve set at the beginning of the year – to run a 5KM (or also known as a 1/8 marathon). 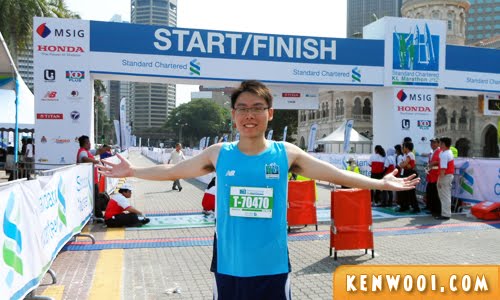