To the world, Korea is a country with mountains of Kimchi. In fact, they do – this huge bowl of Kimchi does look like a mountain to me… 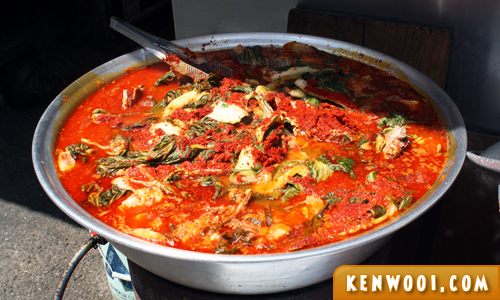 The already famous Kimchi is only the tip of the iceberg, but through this one dish one can see the fundamental characteristics of the Korean cuisine.

To begin with, Seoul is the focal point for tasting the cuisine of the nation. From fancy restaurants to humble establishments – Seoul is known for its culinary wealth.

During our visit to Seoul, it was more of a sightseeing trip – but experiencing the true Korean delicacies was also on our mind. So we started off with the famous one – Dolsot Bibimbap. 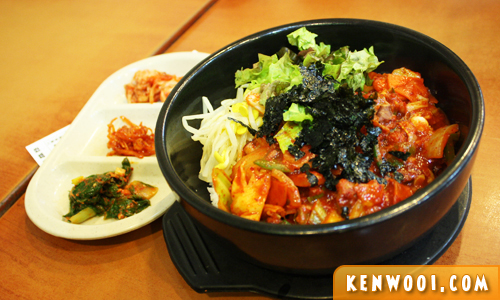 Bibimbap is one of Korea’s most well-known dishes, it’s the first food on the Top 10 Must-Eat Food in Seoul. Depending on the ingredients used, it can be a meat-based or vegetarian-based. 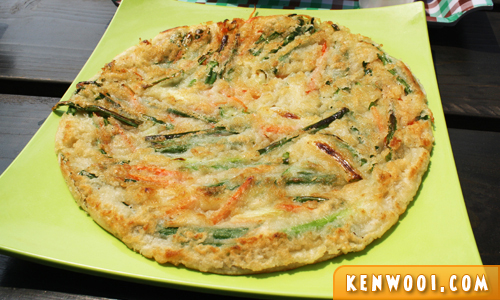 Made from eggs, wheat flour, green onions and other additional ingredients depending on the variety, it’s quite popular among the tourists. It tastes somewhat like the frozen Malaysian roti canai, just that it has lots of vegetables in it.

At third on the Top 10 Must-Eat Food in Seoul is Bulgogi. 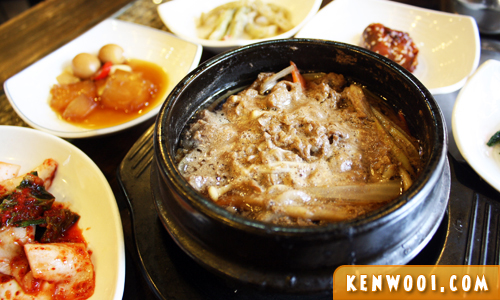 Made from thin slices of beef and typically grilled or pan-cooked, I must say that the marinated meat is really one of a kind. The beef bulgogi we tried in Seoul was soup-based.

As for the remaining 7 on the Top 10 Must-Eat Food in Seoul, they were given a pass – either because it contains alcohol, it doesn’t look attractive, or we don’t have the time. Our focus were sightseeing, remember?

Nevertheless, there are more food to discover. From food allies to high-class restaurants, there are many to choose from and they are accessible via Seoul Subway too. Despite the variety, my choice for a proper meal has to be the small eateries. 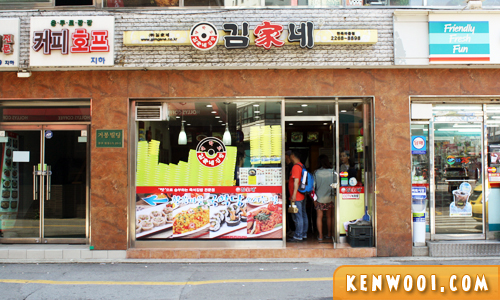 It’s usually the place where the prices are reasonable, and yet you can still enjoy the essence of local Korean cuisine. That would surely make your money worth.

Here’s one of the non Top 10 Food list – Kimchi Jjigae. 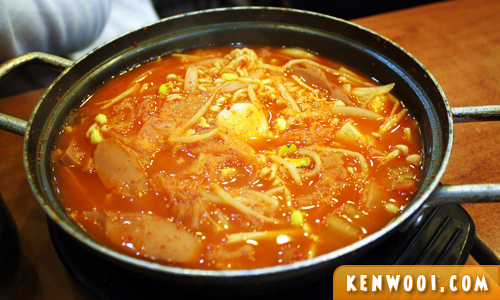 It’s a stew-like Korean dish made prominently with Kimchi. I’m not really a fan of Kimchi, so I didn’t not try it. Looks spicy though.

Another one is the Korean Ramen. 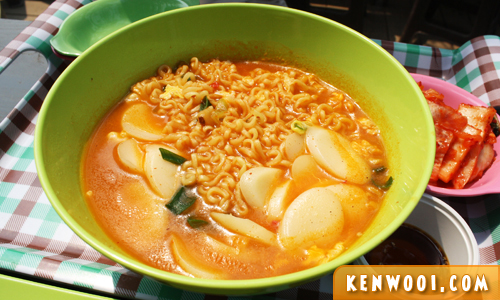 Tastes normal to me.

And here’s the dish that we looked for – Ja Jang Myeon. 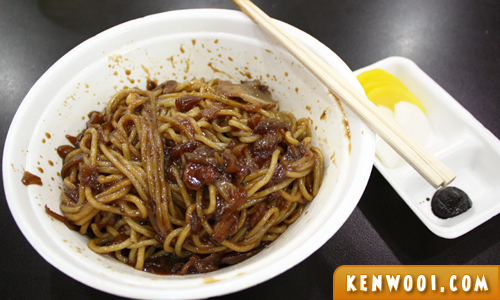 It may not be well-known, but Korean drama enthusiasts would have heard about this Ja Jang Myeon food delivery. Noodles topped with thick sauce, it looks simple and tastes good for supper.

Besides small eateries, being at local street markets brought us into the world of Korean street food. 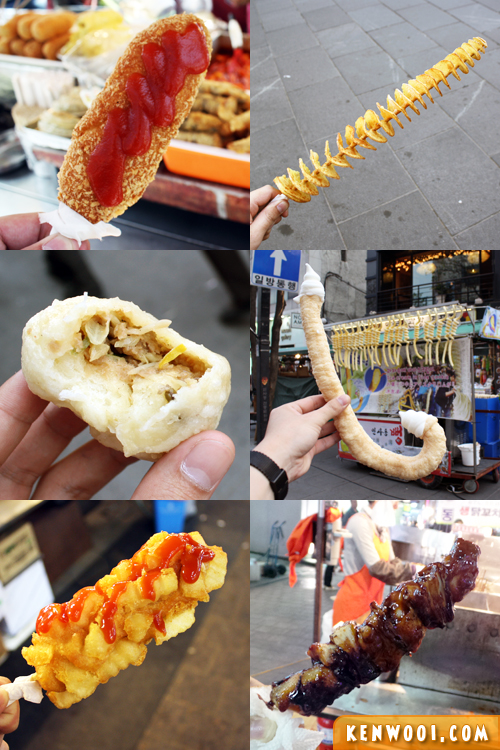 Priced from KRW1,000 (RM2.85) to KRW3,000 (RM8.55), these street food can come in handy when your tummy is growling due to constant traveling. From top left clockwise (may not be actual names) – Sausage coated with Flour, Potato Swirl, Ice-Cream in Funny Looking Cone, Some BBQ Skewered Chicken Stick, Sausage coated with Fries, and Some Meat Bun.

Okay, I admit – I suck at describing food. Guilty as charged.

Anyway, one of my favourites has to be the egg muffin, or egg cake – whichever they call it. 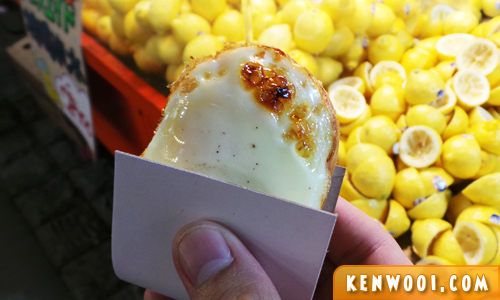 As a egg lover, it’s nice to have an egg muffin while you’re strolling through the night market in Seoul, especially when it’s a cold night. The best I tried so far was at Myeong-dong night market.

Another favourite food is the Kimbap. 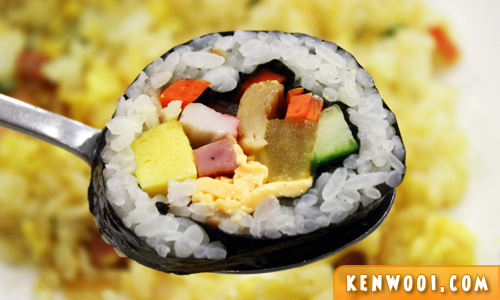 Normally sold at mini stalls and wrapped in an aluminium foil, the Kimbap is definitely an on-the-go food. I can munch on it as I walk along the pavements.

Anyway, if you’re wondering what’s the price range of these Korean food, it’d be quite reasonable if you dine at moderate places. 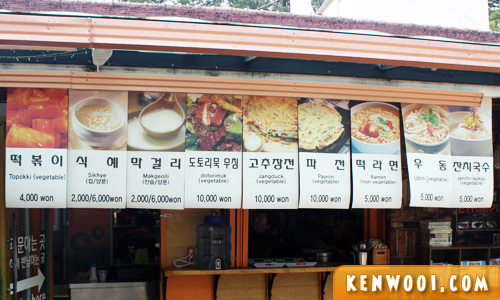 But on a higher-end, we had this semi fine-dining meal at the Hangang Observatory Sunset Cafe. It’s a cafe located at the top of a tower along the Hangang River where guests can watch the sun sets during the evening. 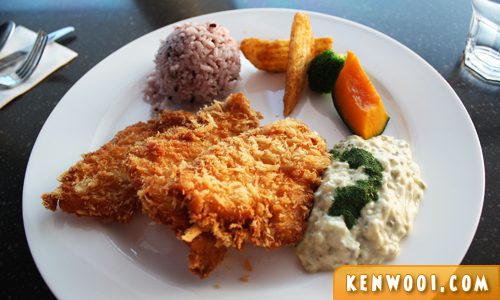 Other than that, we also dropped by fast food restaurants in Seoul. One of them was Lotteria. 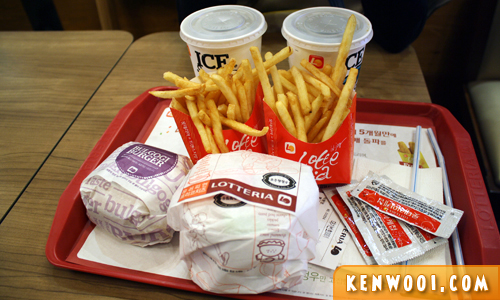 Lotteria is originated from Japan and its name is taken from its parent company, Lotte. In Korea, Lotteria is part of the Lotte Group. They have lines of Koreanized fast food including the Kimchi Burger.

Also, it is possible to overlook McDonald’s? Certainly not! 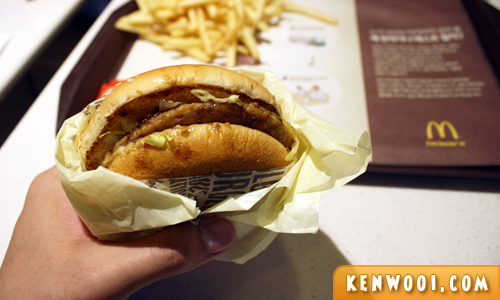 We decided to drop by the McDonald’s outlet nearby the place we stayed, Namsan Guest House, to try out its Bulgogi Burger. The set of burger, fries and soft drink costs KRW4,500 (RM12.83). Quite pricey – but the opportunity to try out a local McD burger in Korea is priceless. ;)

Well, I must say that besides sightseeing, the simple food adventure has been fulfilling as well. Some may say that the living expenses here can be costly, some even say that the Korean food is expensive – but I’d say the traveling expenses at Seoul is manageable since it was a short trip.

In fact, we actually spent more on souvenirs during the whole trip in Seoul – DOUBLE the expenses paid for food! No kidding! 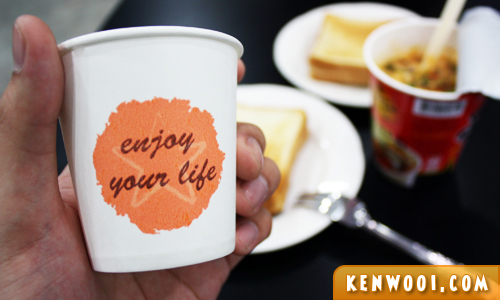 After all, enjoy your life while you’re traveling. That’s life! :)

15 thoughts on “Soul Food of Seoul”