Located 63km away from Seoul, Nami Island is famous for its beautiful Korean pine tree lands and the shooting location for Korean drama, Winter Sonata.

The island is about an hour plus away from Seoul city and since the distance is reasonable, we decided to visit Nami Island during our visit to Seoul. 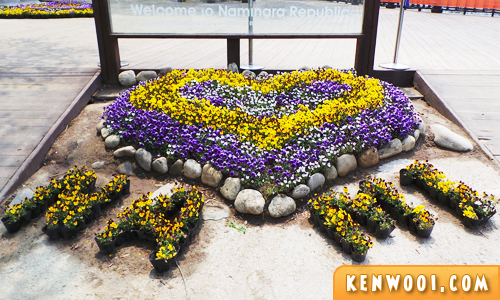 There are a few methods to travel to Nami Island from Seoul, one could either take a shuttle bus from Seoul (advanced reservation required) or just take the Seoul Subway!

For us, we opted for the latter. Traveling by bus is definitely an ideal mode of transportation but I guess it’s more adventurous to travel by train. You’ll know why as you read the travel tip later! ;)

We started the day early by departing from Namsan Guest House, which is relatively close to the Myeong-dong station, and reached Gapyeong station (closest station to Nami Island) after an hour or so train ride (and thankfully not missing any train transfers). 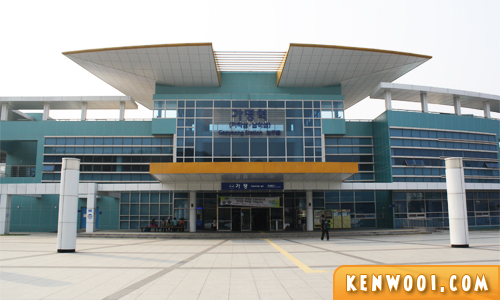 After that, we boarded a local shuttle bus to the ferry wharf to Nami Island. I’m not sure about the price, but it’s surely cheaper than taking the taxi.

Travel Tip: To reach Nami Island via the Seoul Subway – get off at Gapyeong Station (Exit 1) of KyeongChung Line. It’s located 63km from Seoul, so it’s gonna be a long ride with a few transfers.

Once you’re at Gapyeong station, you can take the taxi or shuttle bus to the ferry wharf.

After being dropped off at the scene, we proceeded to the so-called “Immigration” office. 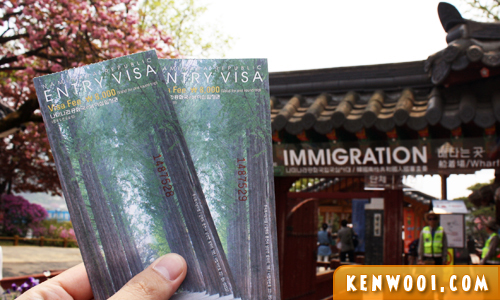 Apparently Nami Island is an imaginary “country” and therefore visitors would have to purchase the “Entry Visa” in order to visit the island. They’re just tickets actually.

After going through the “Immigration” counter, we went to the ferry that will ship the visitors to Nami Island. 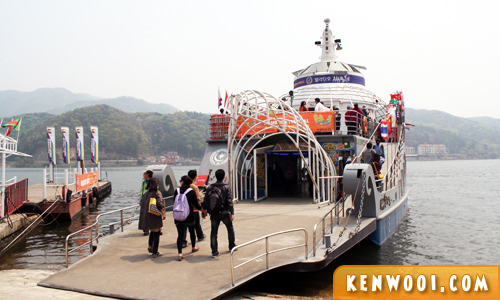 The ferry ride was about 5 minutes, and visitors will find themselves landing on the captivating Nami Island.

We were there on a Monday, thinking that there wouldn’t be much of a crowd since it was supposedly a working day. 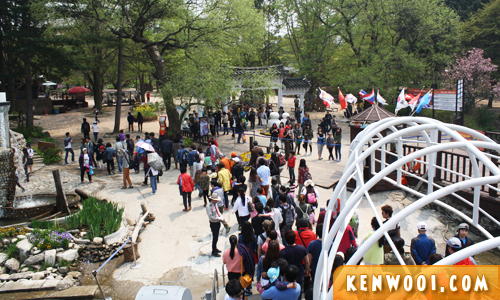 But there were quite a number of visitors, mostly Koreans.

Anyway, here we are – the main entrance of Nami Island, the island of peace, love and harmony! 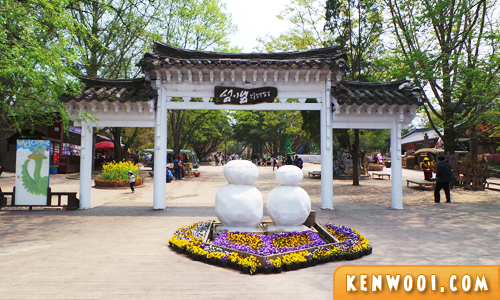 Nami Island (or also known as Namiseom Island) was formed as a result of a dam construction. It’s a half-moon shaped island, and on it’s the grave of General Nami, who led a great victory against the rebels.

Hence the name of the island. 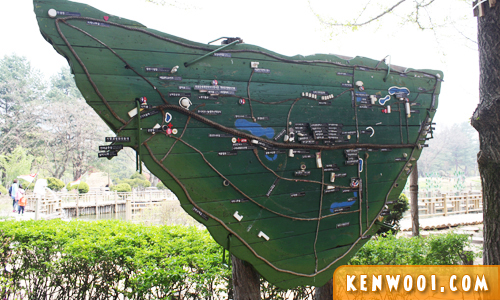 The island is well-decorated and it blends really well with the natural environment. Most of the decorations are in fact handmade, I believe. 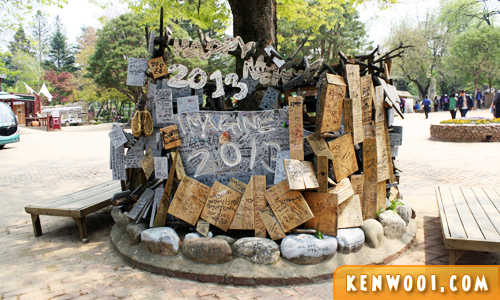 Besides having beautiful trees around, there are grass fields in the middle of the island.

The island also consists of various facilities such as camping sites, water sports, and a mini theme park. 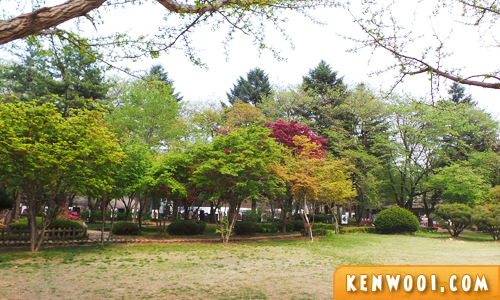 Visitors can also stay on the island since there are lodging facilities such as resort villas and bungalows. However, they’re quite pricey for budget travelers.

Anyway, being there was definitely memorable. With the chilling weather (it was Spring) and beautiful sights of the greens (or even brownish reds), it makes Nami Island a lovely place to be. 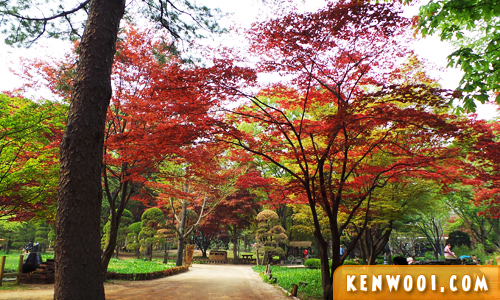 With an extensive bicycle lane, visitors can rent bicycles to cycle around the island as well.

There are single bicycles, couple bicycles (or also know as Tandem bicycle), and also family bicycles (more like a mini cart since they have 4 wheels). 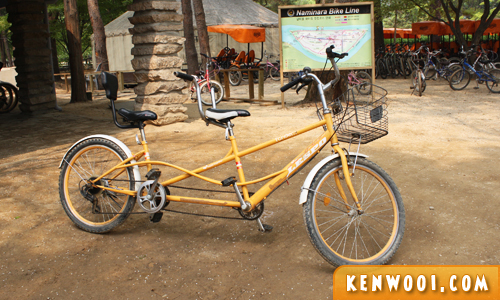 I can’t remember when was the last time I cycled – what more cycling on a Tandem bicycle. Fortunately we didn’t crash. ;)

Anyway, since Nami Island is well-known as the main filming location for Korean drama Winter Sonata, the sight of the famous bronze couple statue can’t be left unnoticeable. 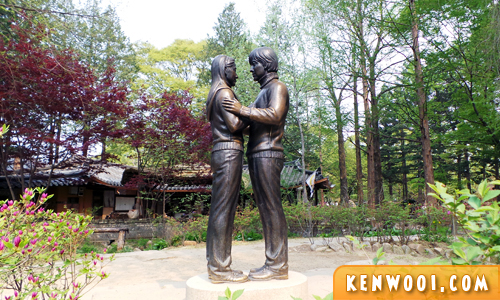 That should be Joon-sang (Bae Yong-joon) and Yoo-jin (Choi Ji-woo) being all romantic with each other.

By the way, I’m not a fan of Winter Sonata and I didn’t watch the drama. But since I was curious when I was preparing this entry, I read the drama’s synopsis. Wah, so dramatic wehh – guy lost memory, girl remembers him and die die wanna get him back. So… urgh!

Besides that statue, there’s an interesting statue nearby… 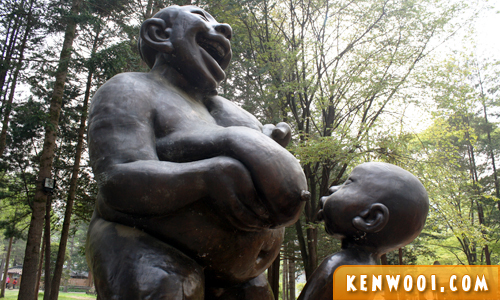 I’m not sure why it’s there, but it depicts a breast-feeding mum and a kid. The mum, with big saggy boobs, looks super delighted. I think the baby is asking… “Got milk?”.

I don’t see any milk though.

Oh, there’s also another interesting statue located not far away… 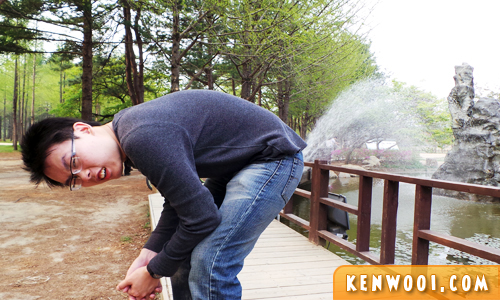 I’m also not sure why it’s there, but it depicts a dude with liquid splurging out of his pants, and I think the dude is groaning… “Urgh!”.