Besides Phi Phi Islands Tour and Krabi 4 Islands Tour, we also signed up for another sea adventure during our Phuket-Krabi trip.

It was the most expensive one and it’s none other than the “Hong by Starlight” excursion by John Gray’s Sea Canoe.

Quick Review: “Hong by Starlight” is an interesting experience. The hidden treasures provides an insight into the beauty of the nature. This excursion invites us to embrace and explore the unknown. 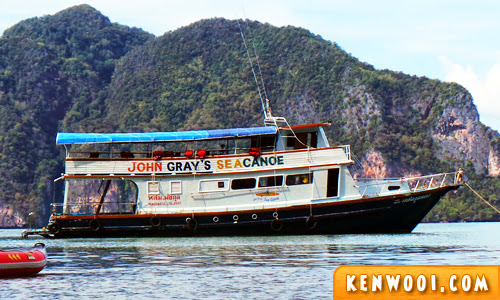 It isn’t your common island-hopping tour as it’s rather exclusive. Due to their “Low Volume, High Quality” policy, the excursion is priced on a higher end and seats are limited.

“Hong by Starlight” wasn’t part of our initial itinerary until we sort of bumped into online reviews about it. Since those who have participated claimed it as “the most remarkable travel experience of their lives”, I thought to myself… why not? 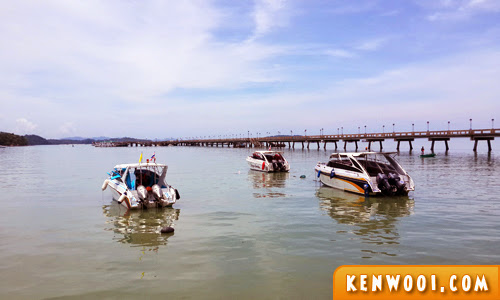 On the day of our trip, we were picked up from our hotel at Patong, Seven Seas Hotel. The designated pick-up time was 11.40am to 12.00pm. Unlike the previous 2 island-hopping tours, the shuttle van arrived sharply at 11.40am.

That was really a good impression, and rightfully meeting the exclusive standard of the excursion.

We were then transported to Ao Po Pier (our departing point) located north-east of Phuket. The journey from Patong Beach to Ao Po Pier took approximately 1 hour. 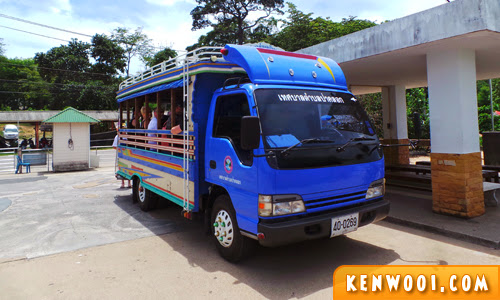 At the jetty, another shuttle van transported us directly to the ferry dock.

During our trip, there were about 30 participants on our ferry. We also found out that sometimes it could be as few as 20 participants. 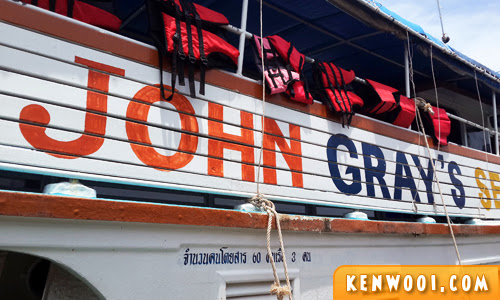 Once everyone was on board, the ferry took off at about 1.00pm.

The first destination of the trip was Phanak Island (Koh Phanak), where we will be exploring 2 caves and hongs. 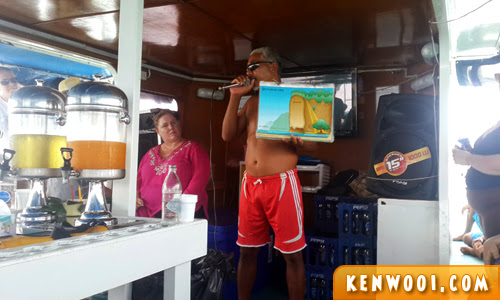 During the ferry ride, a briefing was conducted to educate us about nature and the basic do’s and don’ts when we enter the caves and hongs.

Besides that, buffet lunch was cooked and served on board as well. 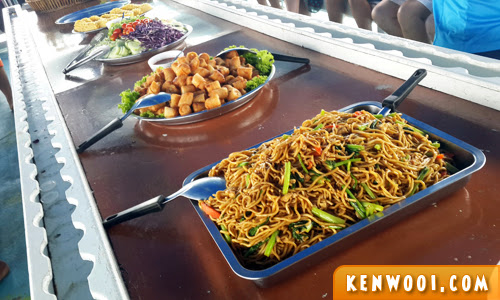 Food such as noodles, spring rolls, salad, and fresh fruits were served and they tasted real good. It was a simple buffet spread, not the typical Thai food, but it’s much more scrumptious than the ones served at Phi Phi Islands Tour and Krabi 4 Islands Tour.

Yes, you get what you pay for.

Throughout the 1 hour and 30 minutes journey to Phanak Island (which didn’t seem long due to the briefing and buffet lunch), we ventured into another part of the Andaman Sea where speedboats were not spotted at all. 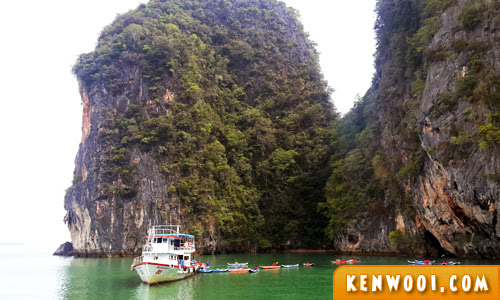 Prior to reaching Phanak Island, John Gray’s paddlers (there were about 15 of them) were individually assigned to every 2 participants.

The paddlers’ main duties were to paddle the canoe (obviously) and to address any questions about the caves and hongs. 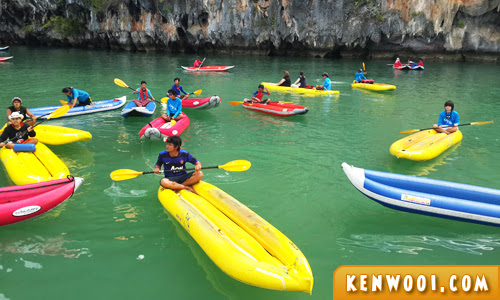 Our duty was simple – to take photos. 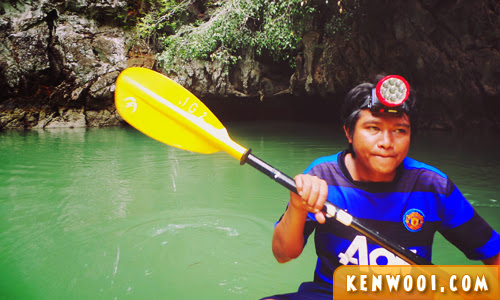 He was a friendly and helpful lad, but unfortunately… he can’t converse in English. Maybe the person in-charge thought we were from China and speak no English, so he assigned us to a paddle with poor command of English.

Pfftt… ask questions also no use.

Some other paddlers had reasonable command of English, and they were really good when explaining to the ang mohs they were paddling for. 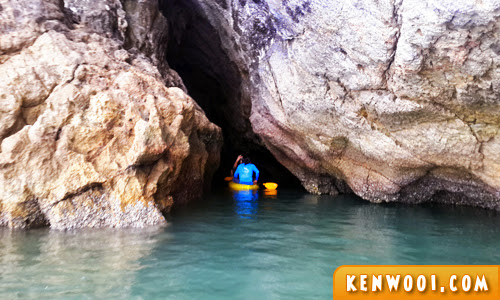 Anyway, we ventured into the first cave and hong, called the Diamond Cave.

It was very interesting and exciting as we entered the dark and narrow cave. We didn’t know what to expect, but were told that the ceiling of the caves will be extremely low.

…till the extent that we have to lie on the canoe to avoid crashing into the stalactites (sharp rock that pokes out from the ceiling of the cave). 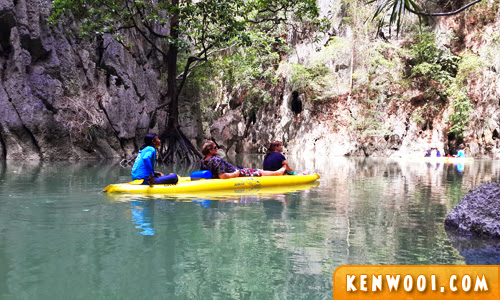 After successfully going through the cave’s wall of limestone, we arrived at the hong.

A hong is the hidden open area in the middle of the island, and the only access to that open area is via the cave.

At the Diamond Cave, it was filled with tranquility and a surround sound of insect buzzing can be heard from all corners. 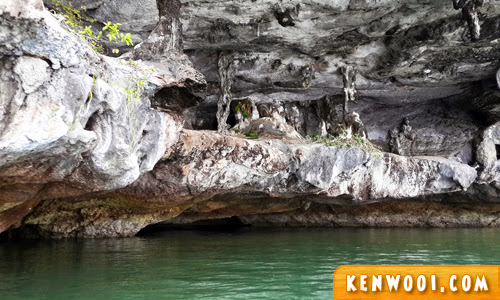 The next cave we explored was the Mangrove Cave.

Once again, we went through another narrow cave in order get to the center of the island. 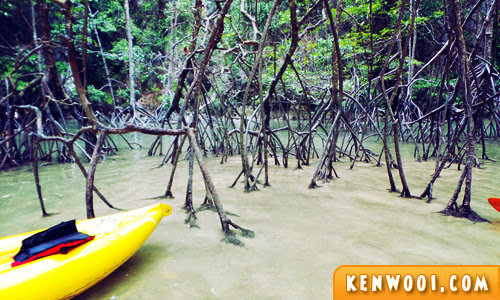 In the Mangrove Cave, we were allowed to get off the canoe as the water was shallow. Mangrove trees occupy the area and hence its name.

We took a stroll with our bare feet and took some “I was here!” shots.

After that, we were canoed back to the ferry. 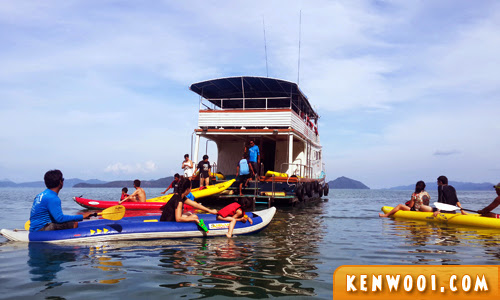 The trip then continued to another smaller island located further north called Hong Island (Koh Hong) where we explored another cave.

It took us about 40 minutes to reach there. 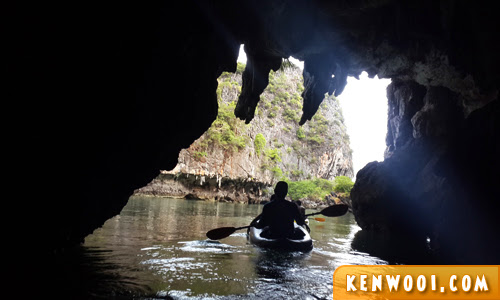 Our paddler then took us into the cave and into another open area beyond the island’s exterior.

The experience was more or less the same, with more limestone and nature to see, and constant buzzing of insects. Compared to the happening island-hopping tours, Hong by Starlight was a rather quiet and peaceful one.

After that, we got back to the ferry and we were allowed to self-paddle on a canoe and swim around the ferry. 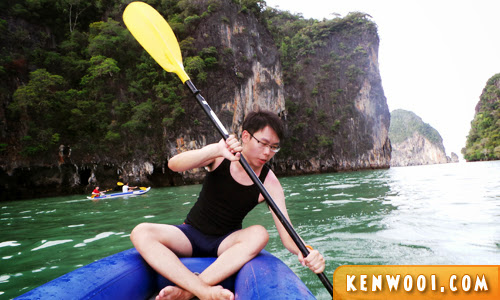 I opted to self-paddle. It’s not like you get to paddle on the Andaman Sea as and when you like, right?

It was my first time canoeing and it was fairly easy to paddle. We didn’t stray too far off the ferry, but the experience was still fun and adventurous.

After about 40 minutes of free and easy, we got back to the ferry and started preparing our own Kratong. 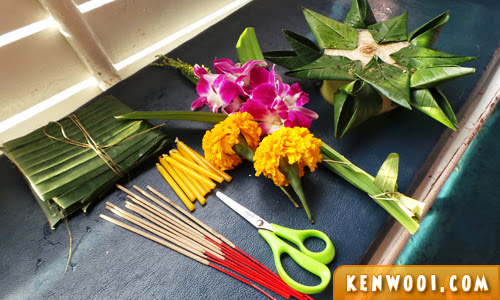 Everyone was given a set of basic materials for the Kratong. It came with a slice of banana tree trunk, banana leaves, flowers, candles and incense sticks.

We were supposed to assemble them together. 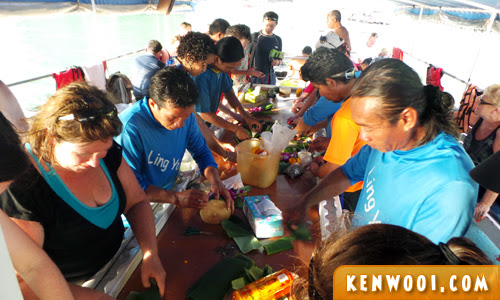 All the paddlers helped out their assigned pairs during the preparation of the Kratong. It was like an art class on the ferry.

The completed Kratongs were then placed on the table while we waited for dinner to be served. 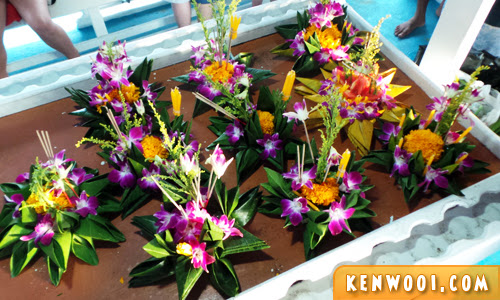 The variety of Kratongs to be released to the water later.

As we head back to Phanak Island from Hong Island, we had a seafood buffet spread for dinner. 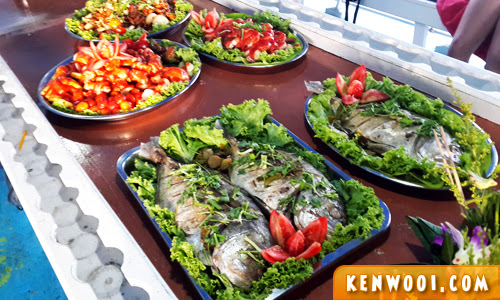 It was already dark when we arrived back at Phanak Island for the second time. This time, the paddlers canoed us to a cave called Bat Cave. Yes, there are bats, lots of them, hanging on the cave’s ceiling.

We were told not to open our mouth when we look up, or else we will get a souvenir in our mouth – the bat’s faeces (aka shit!). Then, we turn into Batman! 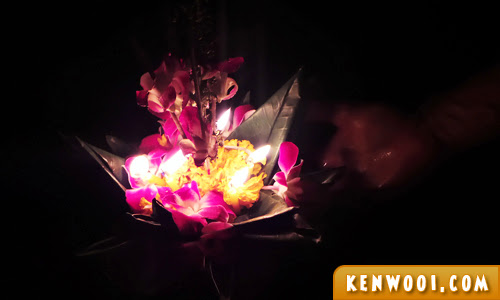 Once in the cave, we made our wishes and then released our Kratong to the water in the dark. It was yet another peaceful moment with nature.

After about 10 minutes or so, we were asked to collect back our Kratong and head back to the ferry. The reason why we can’t leave them in the cave is because the cave will be visited by another group of people the following day.

It would be an eye sore to others if the Kratongs were to be left to burn overnight. Overall, it was definitely an interesting experience. Discovering the hidden treasures provided an insight into the beauty of the nature that we rarely appreciate. This excursion invited us to embrace the unknown and allow our minds to explore.

But if you ask me… is this the most remarkable travel experience of my life? I don’t think so. It is an amazing experience, and that’s about it.

Frankly, the rate is exclusive possibly due to the number of staffs required for the tour. The need to assign an individual paddler to every pair would have been the bulk of the price. Oh, and not forgetting the wonderful meals too.

Nevertheless, it was a damn awesome moment when I got a chance to canoe on the Andaman Sea! 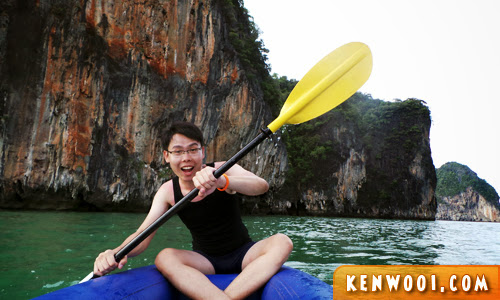 If you’re interested to know the exact locations of Phanak Island and Hong Island, here’s a Google Map for your reference.