Besides the Krabi 4 Islands Tour, we also went on another most talked about island-hopping trip during our Phuket-Krabi trip – the Phi Phi Islands Tour.

We took this island tour from Phuket, and it covered places such as Phi Phi Leh Island, Phi Phi Don Island, and Khai Nok Island.

Quick Review: The Phi Phi Islands beaches are overcrowded, snorkeling is a waste of time, and the island-hopping tour is simply mediocre. It’s overrated, and I wouldn’t recommend it. 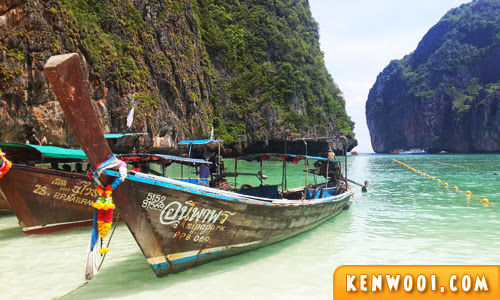 Before I move on, I’d say that the Phi Phi Islands Tour was rather disappointing. Yes, the scenery is all beautiful, but it didn’t meet the expectations built from all the hype. Read on to find out why, and spot my “Disappointments” along the way.

The tour agency we signed up with was Sea Angel Speedboat.

As mentioned on 10 Thailand Travel Tips, I’ve committed this tiny mistake by purchasing the tour an evening before the day. 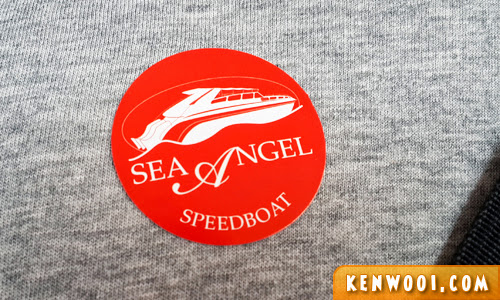 At Patong, the tour agency was right outside our hotel, Seven Seas Hotel, and they charged us THB1,200 (RM123.36) per adult. However when we’re on the trip, we overheard someone else who paid only THB900 (RM92.52) per adult.

Travel Tip: The price of Phi Phi Islands Tour by Speedboat stated online is at least THB3,000 (RM308.40) and it’s quite standard across multiple websites. Therefore, never buy online. The best rates can be obtained at local tour agents.

The next morning, the pick-up was scheduled between 7.45am to 8.00am. As expected, the pick-up van arrived at 8.10am, 10 minutes later than stated. Similar to Krabi 4 Islands Tour‘s pick-up, punctuality was slightly off track. 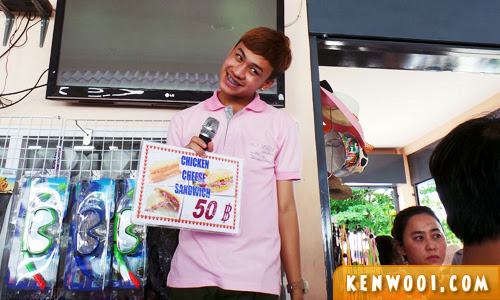 Anyway, we were transported to Sea Angel Pier (nearby Rassada Pier), the jetty where we departed for the Phi Phi Islands Tour.

Before we board the speedboat, everyone was briefed by a very entertaining person. I think his feminist personality would have won him an award, but other than that, he’s basically a salesman.

He sort of encouraged us to buy or rent unnecessary stuffs like… peanuts for the monkeys, bread for the fishes, fins for snorkeling, and waterproof pouches for mobile devices. 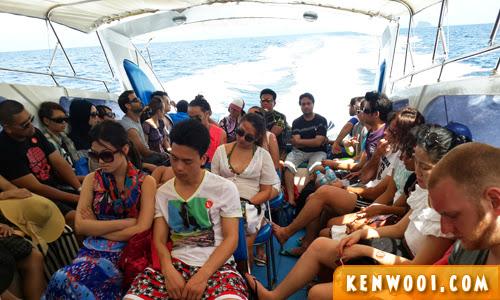 Disappointment #1: I thought it can be used underwater while snorkeling, but when dipped under the water the phone’s screen can’t feel my fingers through the pouch at all. Money wasted.

Anyway, we departed at 9.30am and headed to our first destination, Maya Bay. A 3-engine speedboat was used, and there were about 40 people on board. We were expected to arrive within 1 hour. 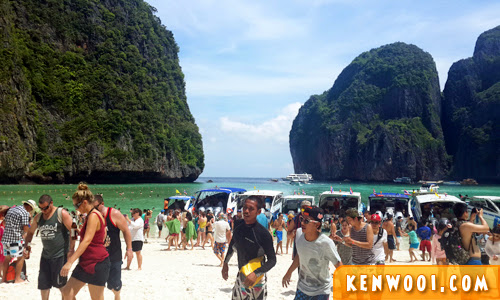 Despite being crowded, Maya Bay, famous for being a set for “The Beach” featuring Leonardo DiCaprio, has beautiful white sand and clear turquoise water.

There wasn’t anything to do on this beach, except to stroll around, play with sand, and perhaps… jump for a shot. 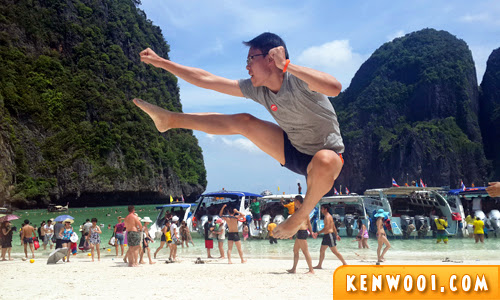 Next destination was Viking Cave. 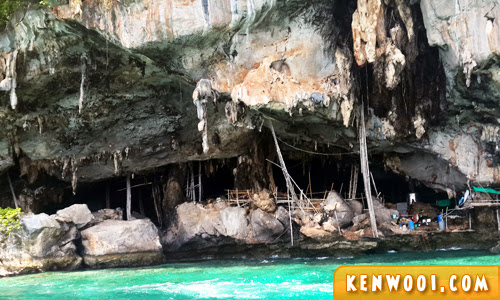 It was a quick sightseeing “stop” on water for us to take photos. According to the tour guide, visitors were once allowed to explore the area.

Disappointment #2: But due to a recent vandalism, the tourism ministry has banned visitors from entering the cave. That sucks.

After that, we proceeded to another “stop” at Pileh Cove. The boat slowed down, the tour guide mumbled some forgettable explanation about this lagoon, and we left the place. 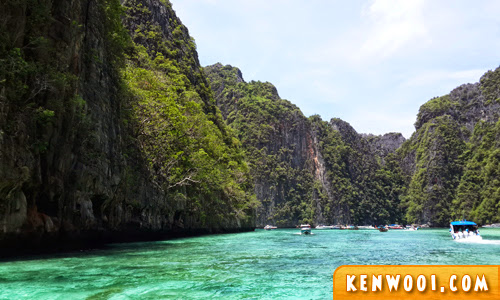 By the way, our tour guide’s voice was very hoarse and I find it hard to understand him sometimes. He really need a good dose of Fishermans Friend lozenges.

The first destination at Phi Phi Don was Monkey Bay. Yes, it’s a home to a colony of monkeys. 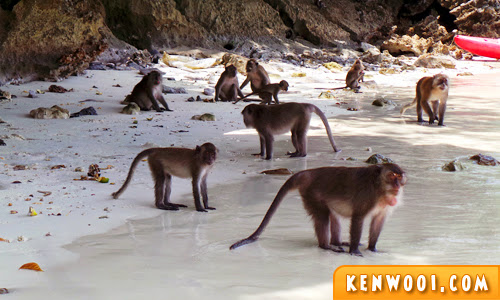 It sounded fun to be seeing monkeys. But once again it was such a quick stop that I think those who purchased groundnuts didn’t even manage to feed them all to the monkeys.

Maybe the visitors ended up eating the groundnuts themselves. 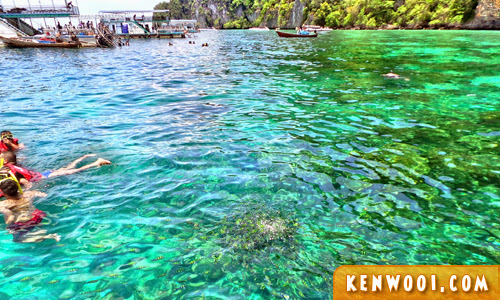 Disappointment #3: Well, it was slightly better than Krabi’s since the water wasn’t murky, but the seabed was also lifeless. The tsunami in 2004 may have wiped them out. 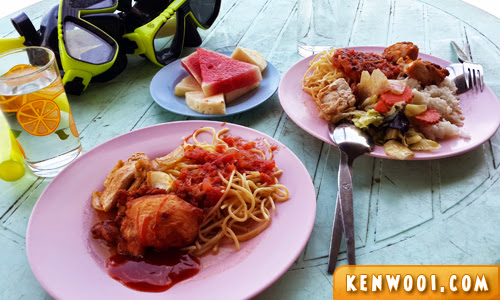 In the afternoon, we stopped for a mediocre buffet lunch at Phi Phi Don Island. It’s not a Thai food buffet and the selection was rather limited.

Also available on the island was the well-known “I snap your photo, print it, and hope you’ll buy later” photography service. 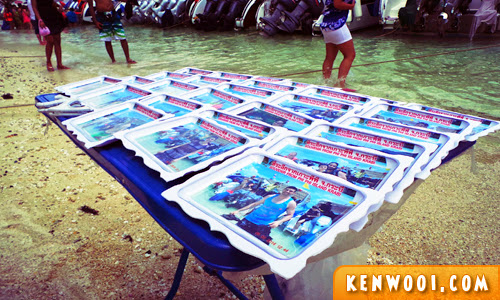 Anyway, we only went to Monkey Bay and had lunch at Phi Phi Don Island. The tour didn’t include further exploration of the island. What a waste.

After leaving the Phi Phi Islands, our last stop (probably only applicable for tours from Phuket) was Khai Nok Island. 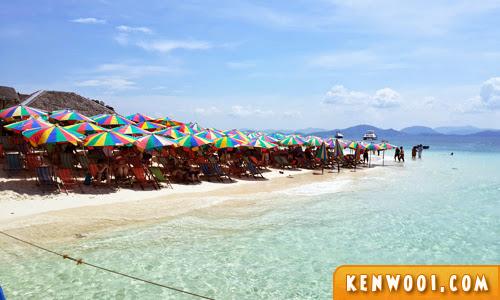 The island was decorated with colourful umbrellas and beach benches. We were left on the island for about 2 hours, and if you don’t mind paying a small fee of THB150 (RM15.42) you can laze on the beach by renting a beach bench.

Disappointment #5: We were also told that we can snorkel around the island too. But it’s a beach and the water is so shallow… how to snorkel? 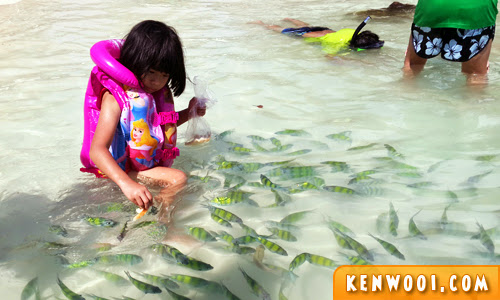 We decided not to snorkel, and instead roam around the island and watched other people, like a little girl feeding fishes and a grown up girl strutting beach poses for her photographer boyfriend.

At Khai Nok Island, we were also served with platters of fruits – pineapple and watermelon. 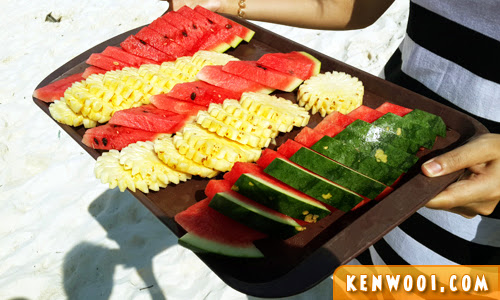 Besides that, carbonated drinks were available too. 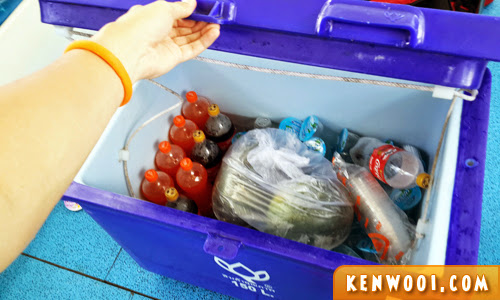 Drinking Coke on a hot weather was just… great!

After about 2 hours at Khai Nok Island, we left the island at 3.45pm and arrived at Rassada Pier at 4.30pm. Everyone was then sent back to their respective hotels by the same van.

Overall, I find the Phi Phi Islands Tour rather overrated. Those who say Phi Phi Islands are a “must-see” are probably not a recent visitor. The once beautiful Thai nature has possibly been exploited and destroyed due to mass tourism. 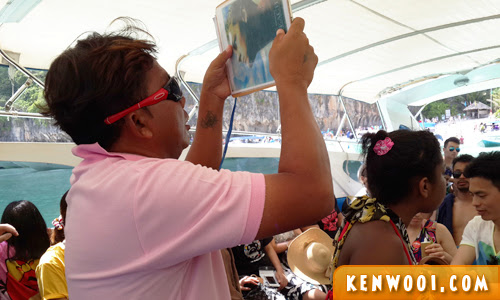 Oh yeah, at the end of the trip, the tour guy (with the hoarse voice, remember?) thanked us for joining on the trip and mentioned that a tip would be great. Since we didn’t really enjoy the trip, we didn’t intend to tip. But…

Disappointment #6: He carried the tip box and approached everyone on the boat. If you haven’t dropped in any cash, he’ll keep waiting. What…?!

All in all, I would have given the Phi Phi Islands Tour by Sea Angel a thumbs up, something similar to the photo below… 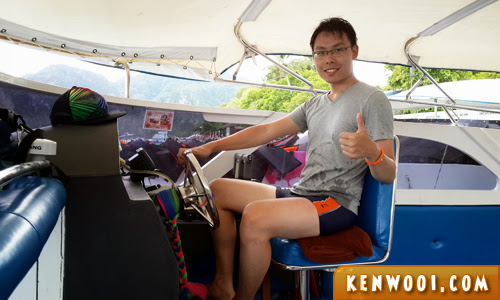 …and steer it around the Andaman Sea, do some extreme water stunts, and wreck the speedboat along the way. But that doesn’t matter now.

The beaches were overcrowded, snorkeling was a waste of time, the tour guide with the horse hoarse voice was somewhat hostile, and I wouldn’t recommend it to anyone. 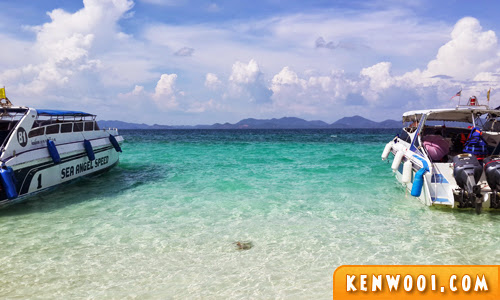 But if you insist, go ahead – I’m sure you’ll have a “splendid” time out there. After all, everyone deserve to know what’s like out there. :)

If you’re interested to know the exact locations of the Phi Phi Islands and Khai Nok Island, here’s a Google Map for your reference.