As the Official Broadcaster with all 64 LIVE matches in HD, Astro brings the great matches from Brazil to our television screen with an enhanced viewing experience and engagement. 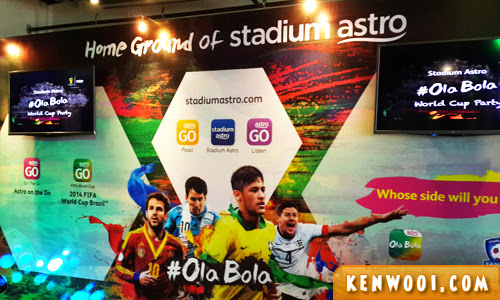 Recently I attended the Stadium Astro #OlaBola World Cup Party at One City Mall. The event is the official event by Astro to kick-off the World Cup by gathering avid fans together.

At the beginning of the event, we were briefed with some of the Apps developed by Astro for the World Cup. 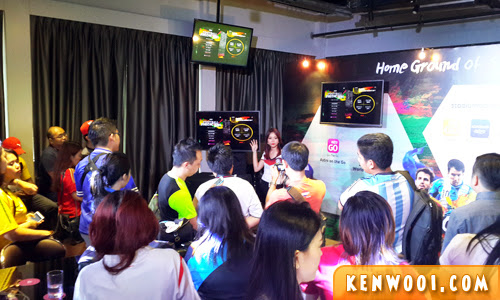 The great thing about Astro is that it offers 30 Live matches to non-Astro subscribers for Free on Astro on the GO app. How cool is that? Of course, Astro Football Pass Holders will have access to all 64 Live matches and FIFA World Cup on Demand content.

Reuben Kang and Jun Yong, both TV Host on Astro Supersport entertained us throughout the 4 hours of the event. 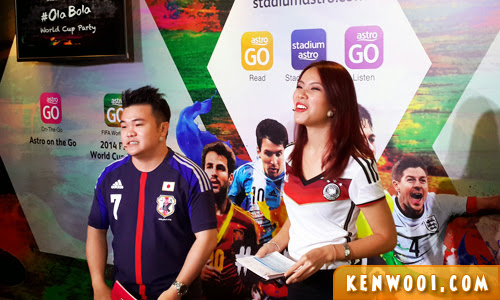 They shared the apps available and even showed demos to help us to better understand the usage of the apps. There are in total 4 apps – Astro on the Go, Astro Go 2014 FIFA World Cup, #OlaBola Football Predictor, and Stadium Astro.

After dinner, we proceeded to the station games where 6 teams compete at 4 stations to win fun prizes. 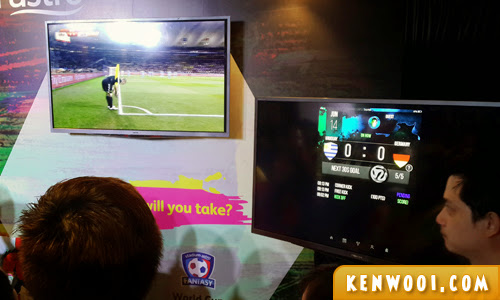 The first station featured the #OlaBola Football Predictor where teams were to predict the outcome of a football match. The more accurate the predictions, the more points the team will score. 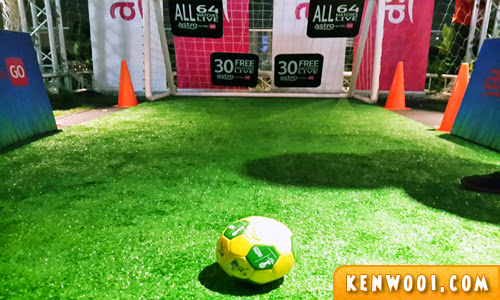 The next station required the team members to kick a miniature-sized football into a small goal. Hitting the ball at the bottom center of the goal will score them 10 points, while hitting the top corners will score 20 points.

I had a chance to try this out, and guess what – I scored the 20 points. Well, not so kaki bangku after all. ;) 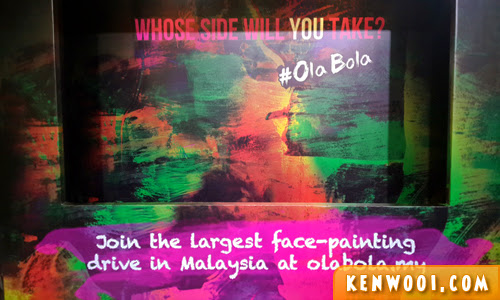 The other station allowed the teams to join the largest face-painting (digitally painted, to be exact) drive in Malaysia at olabola.my. Give it a try! 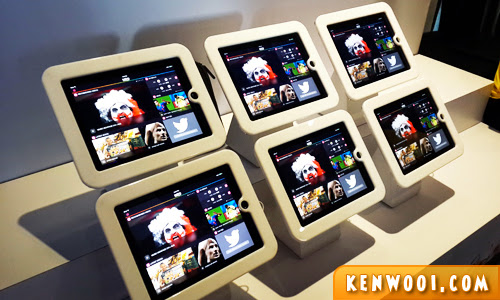 The last station involved the Astro Go 2014 FIFA World Cup app where the teams were to rearrange the app’s components into an order as instructed.

After an hour of laughter, screams and excitement, the teams settled down and the final scores were calculated. The top 3 teams were announced, and Team “Italy” emerged as champion! 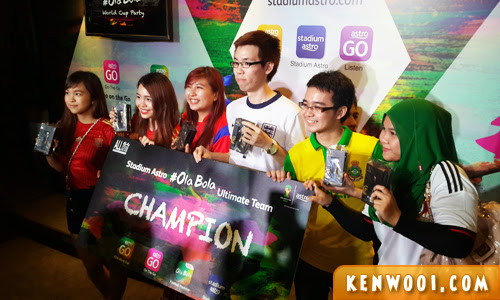 Anyway, to make your life more exciting during this World Cup season, here are some apps you have to get for yourself! They are available for free download on iOS/Android.

Astro on the Go features all 64 matches of the 2014 FIFA World Cup™ for both Astro customers and non-Astro customers. 30 of the 64 LIVE matches will be FREE for all Malaysians while customers can purchase single game on pay-per-view basis sold at RM6 each. 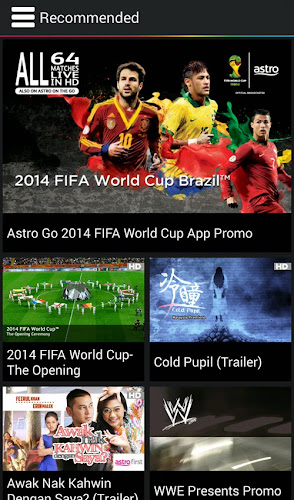 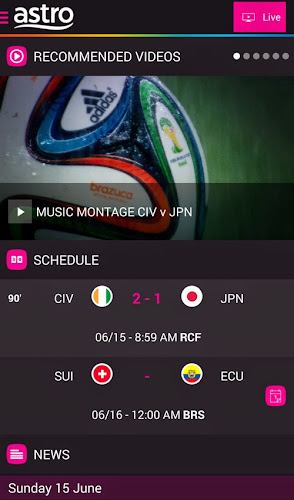 With the Astro Football Pass, you can watch all 64 LIVE matches through 6 Multi-Camera feeds with Timeline and Event Markers for instant replay, Multi-Angle review, comprehensive info and statistics, and over 4,000 Video On Demand Clips all in one app. 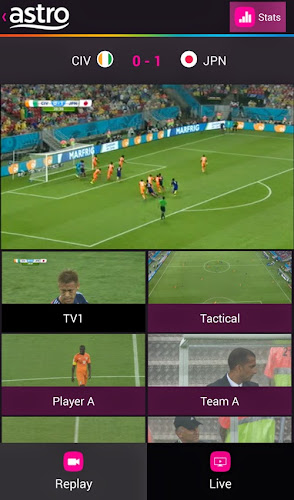 Watch the matches Live, or even on Replay – so you don’t miss out on any moments and goals throughout the World Cup 2014. 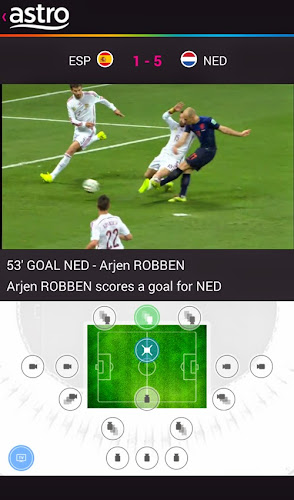 The above is a slow-motion video of Arjen Robben’s goal against Spain. It’s great to have the control of the various camera views!

Ola Bola Football Predictor is a LIVE football prediction app – this means that you can make predictions on events (eg. free kicks, corners and penalty kicks) during an ongoing LIVE football match. 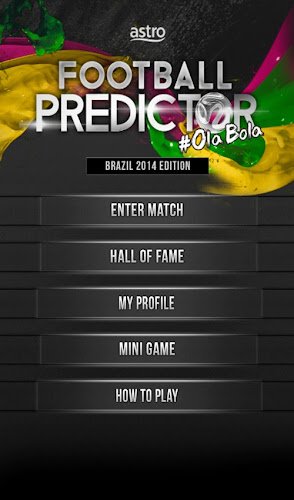 Score points when you make accurate predictions as you follow the matches, and accumulating points as you challenge your friends to emerge the Champion of Football Predictor for World Cup 2014! 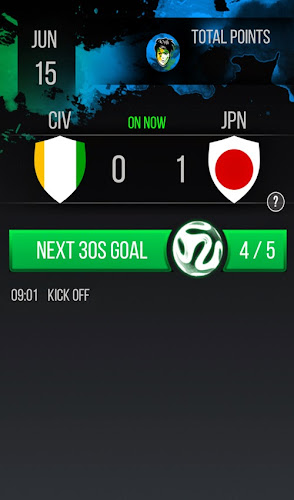 Get to predict live with the game and score points for yourself! Here’s an example for a corner that’s happening during a match. 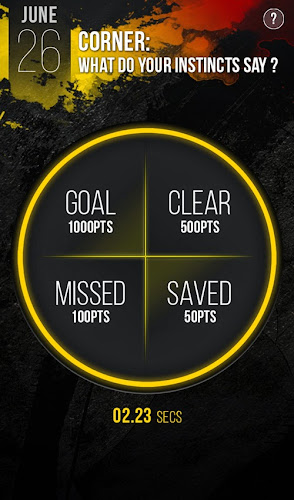 At the end of the match, score points and compete with your friends! 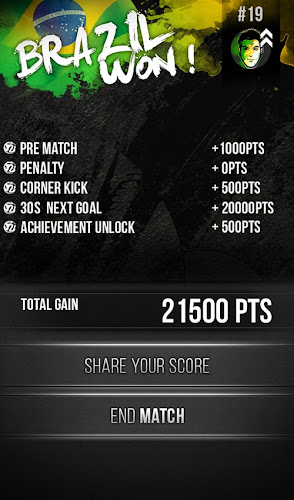 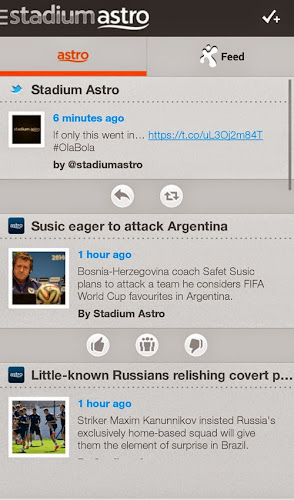 Towards the end of the event, there were also quick session of pop quiz by the emcees and those who managed to answer would get an official FIFA World Cup merchandise. 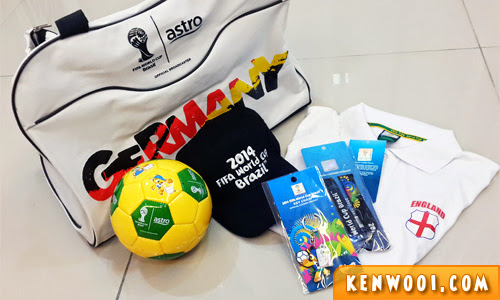 Since it’s still the early stages of the 2014 FIFA World Cup, whose side will you take? Which team do you think will triumph in Brazil? 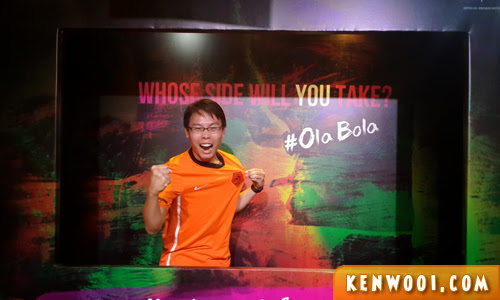 For this whole month, I’m so gonna cook my own supper and stay up to watch Netherlands’ matches. :D 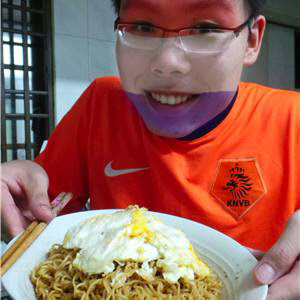 So, whose side will you take? Show your support by getting your face digitally painted at olabola.my.

Netherlands came so close 4 years ago, and this year’s 5-1 romp over Spain on the first game, they have surely made their mark as a serious contender this year. Let’s go!