The Banpo Bridge Rainbow Fountain in Seoul is the world’s longest bridge fountain. During our trip to Seoul, we decided to drop by on one of the nights.

One word to describe the fountain show – spectacular! 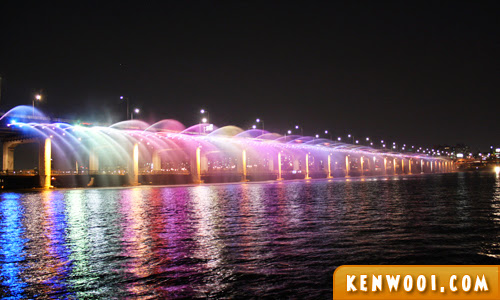 The fountain on Banpo Bridge is in fact called Moonlight Rainbow Fountain and it was installed in 2009 to further beautify the city and showcase Seoul’s eco-friendliness.

Travel Tip: To reach Banpo Bridge via the Seoul Subway – get off at Dongjak Station (Exit 1 or 2). Go down the staircase and head to the river. Then, turn right and continue walking along the river bank. You will pass Dongjak Bridge before reaching Banpo Bridge. The distance is about 1.5km away and a slow walk should take about 30 minutes. 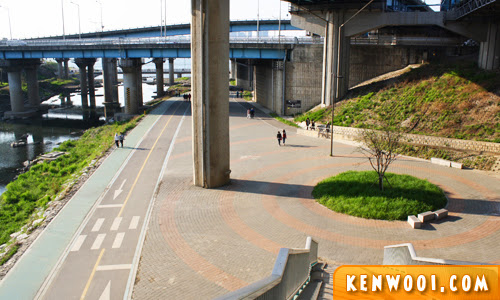 We reached the Dongjak Station rather early, but since the weather in Seoul was cooling it doesn’t matter at all. A stroll along the river bank of Hangang River was a breathtaking experience by itself.

As the day got darker, we arrived at the outdoor recreational area. It has an outdoor stage, observatory and picnic spots. 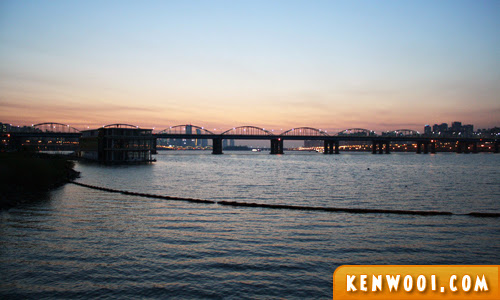 Lots of youngsters were gathered at the picnic area, chatting in groups.

The fountain plays different shows during the day and night. We didn’t manage to watch the day show since we decided to watch the night one instead – which is more colorful. 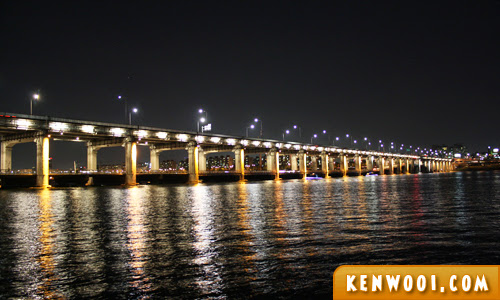 This is Banpo Bridge – without the fountain show.

Every night at 8.00pm, the show runs on an hourly interval (for weekdays) or a 30 minutes interval (for weekends) and each show is about 15 minutes long. It is accompanied by popular music, typically romantic love songs, projected through loud speakers installed around the vicinity. 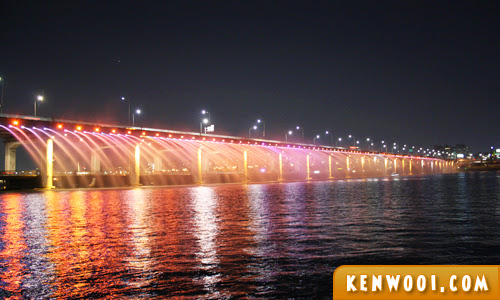 When the night show starts, lights illuminate the bridge as the fountain pumps jets of water into the air in synchronization with the music. 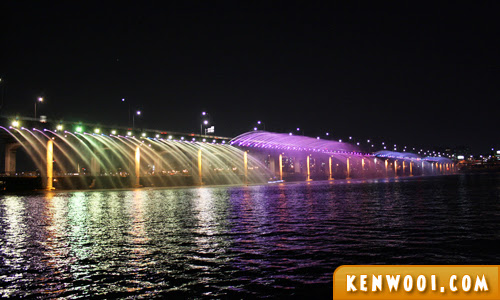 The jets of water dance up and down with variations of colors throughout the entire 15 minutes.

By the way, it may be chilling cold out there. So it’s encouraged to have the proper attire while you sit out in the freezing cold weather. 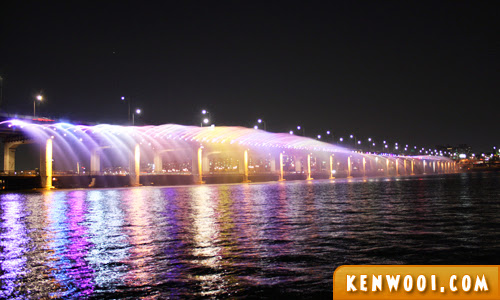 They played both English and Korean music. Some oldies, some rather modern. The streams of water are orchestrated to perform with the melody and tone of the music.

We managed to watched 2 shows, and then we left the area since we couldn’t stand the freezing cold night. Brr…! 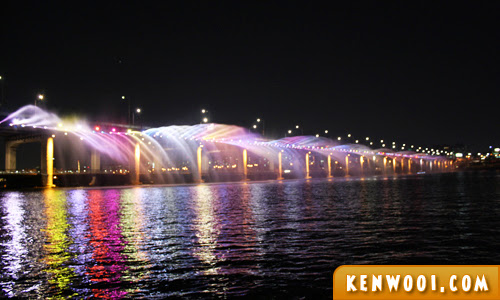 Don’t miss out when you’re there! :D