I’ve first participated in a short “marathon” in 2012, and I’ve been doing so ever since. I may not be a running fanatic, but it’s a casual hobby I enjoy doing.

So here’s to my FIRST night run at the Energizer Night Race 2014! 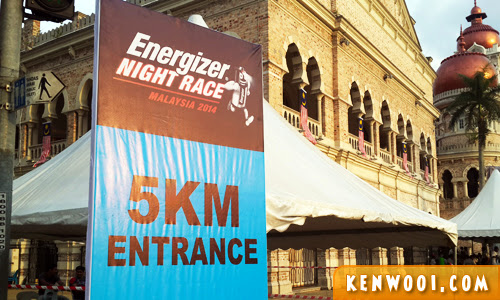 It was held at Dataran Merdeka, similar to Standard Chartered KL Marathon where I ran 5KM in 2012 and 10KM in 2013. The only differences are the routes, and the “night mode”.

This year’s Energizer Night Race comprises of 2 categories – 5KM and 15KM. I signed up for the 5KM one because with my current non-existent workout regime, 15KM seems harder. Heh.

Note to self: Gotta pick up the pace if I aspire to achieve the distance! ;) 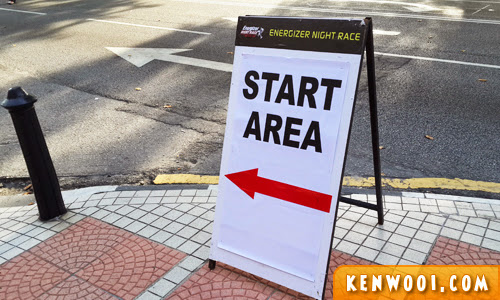 Anyway, the flag offs were at 8.00pm and 8.20pm for the respective categories.

We arrived at Dataran Merdeka via the Masjid Jamek LRT station at about 5pm. It was quite early but there were ongoing activities for the participants.

The first task we did was to collect our headlights. 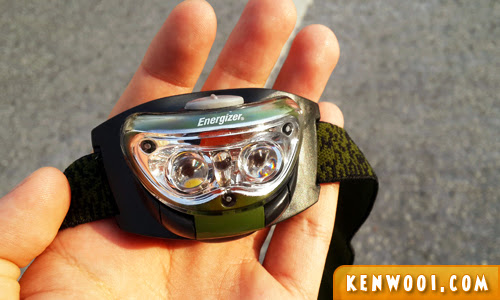 It’s meant to be worn around the forehead, but some people wore it around the wrist. I even saw a lady using it as a hairband.

Also, these headlights were given complimentary to the runners. Energizer didn’t collect them back after the race. :)

Anyway, there were mobile toilets around the area. Quite common lah for an event like this. 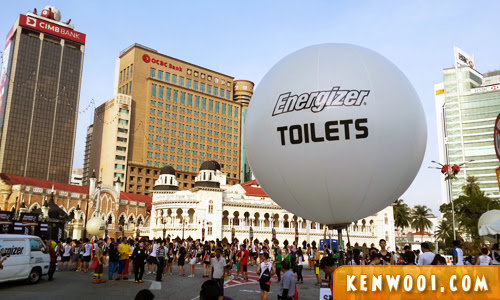 The interesting thing about the toilets is that they’re called… ENERGIZER TOILETS!

Actually, I was somewhat tired when I was there. Perhaps lack of sleep the night before. Therefore it’s crucial for me to get my dose of energy by visiting Energizer’s energizing toilets. 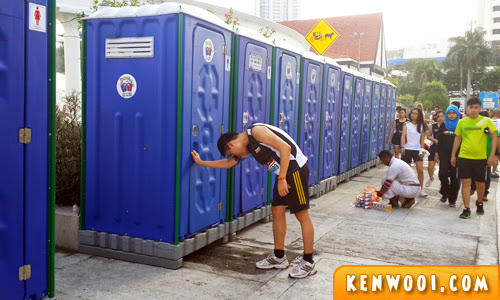 So I went into one of them, did my business, and…

I came out feeling so… SO ENERGIZED. Serious shit… look at me after I came out weh! I became ALIVE after a quick session in the blue Energizer container. Simply amazing, right? I’m SO gonna get a Energizer Toilet at home – it’ll be my “caffeine fix”. ;)

Anyway, we had too much time to kill as it was approximately 3 hours before the flag off. 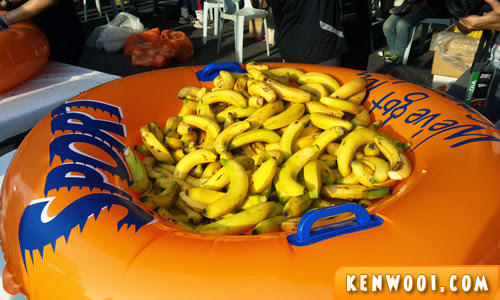 So we became monkeys and munched on complimentary free-flow bananas. It’s a partnership with Banana Boat, the sunblock company.

Other than that, Camp 5 was around offering complimentary rock-climbing tryouts. I’ve always wanted to rock-climb, but didn’t have the spare time for it.

Okay, maybe I’ve been procrastinating. So this time, I gave it a try… 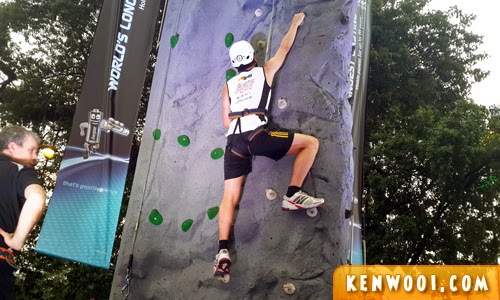 In fact, my fingers got a genuine workout during the climb. ;)

The flag offs were inching closer as day got darker. Here’s a view of the starting and ending point for both routes at Dataran Merdeka. 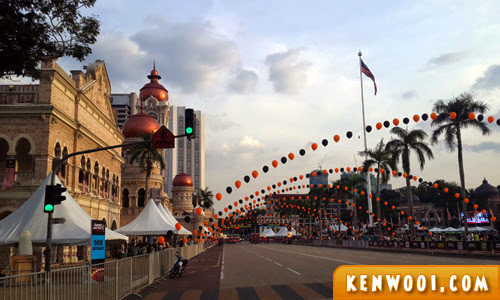 20 minutes later, the 5KM runners took their spot at the starting line. 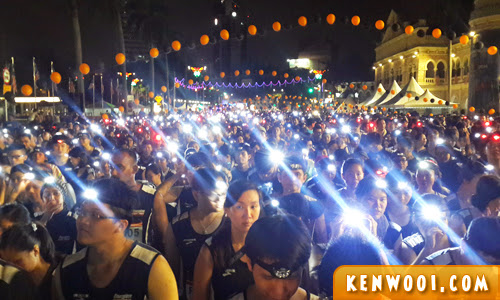 Everyone got their headlights on and it’s practically a sea of lights.

By the way, the 5KM route is lighted up throughout the entire journey. So the headlights were additional lights for the runners’ view. I’m not sure about the 15KM’s route though. 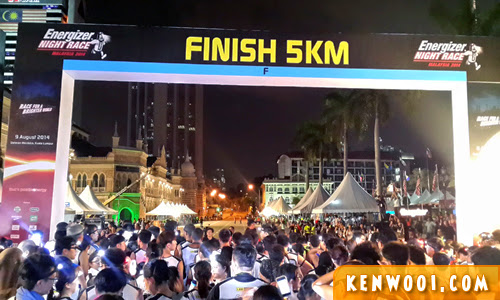 Not long later, the countdown for 5KM started and off we go into the darkness – my first night run!

I finished it in 54 minutes, with an average pace of 11 minutes/km. Well, I didn’t run as much as I wanted to – no thanks to my minimal training. But I’d say it’s not a bad achievement. ;)

Here’s my run progress with the Nike+ Running app… 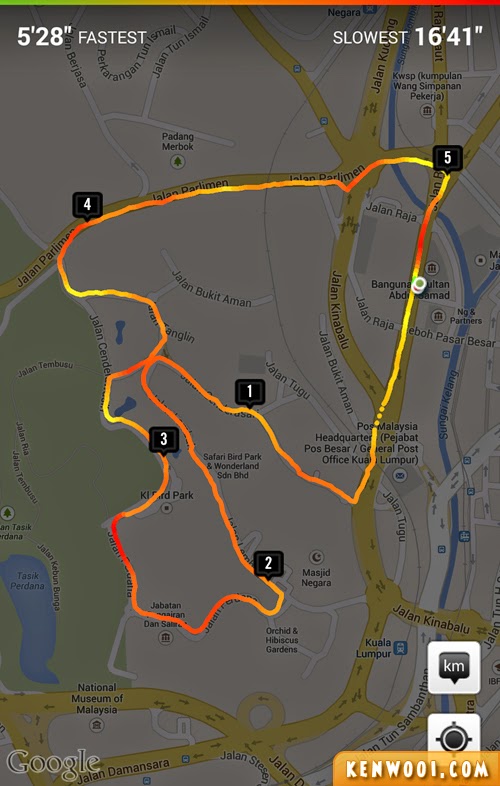 Furthermore, it was quite crowded – many runners and narrow roads. We also took a while at the 2.5KM point, the water station’s location, to grab some water and 100Plus.

Overall, it was a good night workout. We reached the finishing line at about 9.20pm – another successful effort. :) Runners then proceeded to collect their finisher’s medal, snacks and drinks.

So yeah, I’ve completed the 5KM Energizer Night Race – my first run in 2014! Next up for me, the 10KM Standard Chartered KL Marathon in October 2014!

If you’re running too, say Hi! 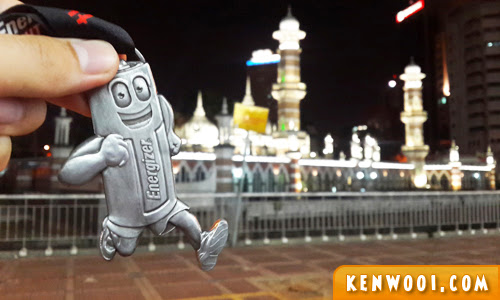