We Discover, You Explore – The tagline used by Expat Explore, the tour agency we took to explore 3 countries within Great Britain during our recent trip to the UK back in November 2013.

Frankly, I’m not a fan of joining tours while traveling as I prefer to plan an itinerary by myself. But since it was already booked, I just follow lah. ;) 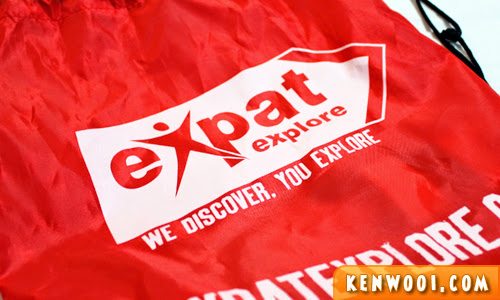 Anyway, it’s a 7D6N tour that travels to cities in England, Scotland and Wales, the 3 countries that make Great Britain a great place to visit. ;)

Quick Review: Great Britain Tour by Expat Explore brings travelers to beautiful and amazing cities such as Cambridge, York, Edinburgh, Inverness, Liverpool, Wales, and Bath. The accommodations provided are comfortable and the tour guides are friendly and knowledgeable. Normal rate costs £699 (RM3,928) but it can go as low as £399 (RM2,242) for early birds.

After spending a few days at Hatfield, we started the tour in London, England where the coach picks us up from Greenwich Holiday Inn Express, the hotel we stayed a night before the tour. 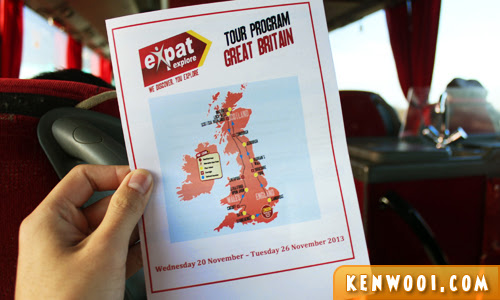 Once on the coach, the tour began! It was quite exciting as the tour brought me to Scotland and Wales for the first time. The only country the tour didn’t cover to make it a complete UK Tour was Northern Ireland.

Anyway, we were given a door gift on the coach. 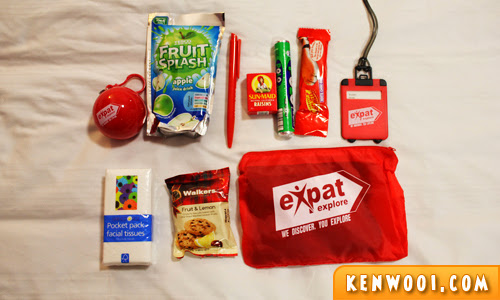 It consists of a set of basic traveling kit such as poncho, tissue, and snacks. By the way, I finished the snacks within the first day.

So yeah, here are the cities we’ve visited throughout the entire trip. 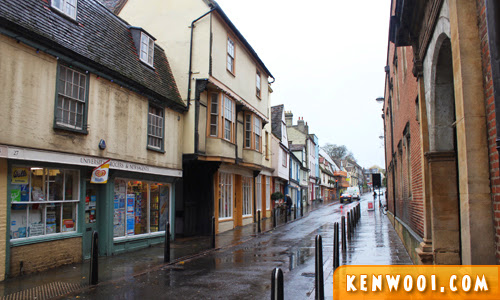 The tour started with a quick stop at Cambridge. The city is known as a university town, especially as the home of the University of Cambridge. It was gloomy day, but it didn’t stopped us from punting, a popular activity there, along the River Cam.

After that, we traveled further north to York, a historic city with rich heritage. 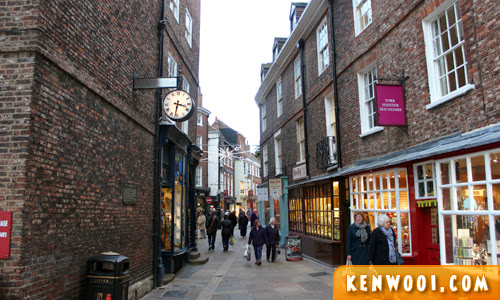 It was already evening when we reached there, and we were brought through the alleys with several stores and eateries. One of the medieval streets, called The Shambles, was used as one of the shooting locations for Harry Potter.

We went further north to Scotland. On the way there, we stopped at Hadrian’s Wall, a wall built to defend against the barbarians from the north (aka Scottish) during the Roman administration in Britain. 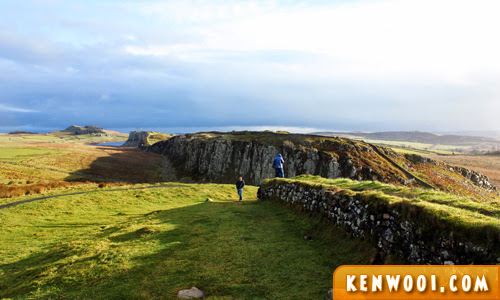 Since the wall is located on a higher land, it was very cooling and windy. As of today, only certain sections of Hadrian’s Wall remain as much of the stones have been used by nearby villages to furnish their house.

In 1987, the wall was declared as a World Heritage Site.

Then, our coach crossed the England-Scotland border. 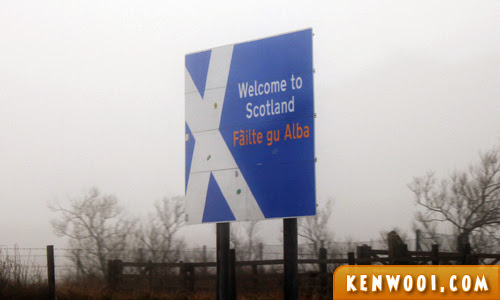 Finally, I set foot on Scotland! The first stop was a small town near the Scottish border called Jedburgh. We were there for about 2 hours, and then we proceeded to Edinburgh.

Edinburgh is the capital city of Scotland, and it was really fascinating to be there. The tour arrived there late in the evening and we got a quick walking tour around the city as the day darkens.

That night, we stayed at a hotel slightly out from Edinburgh. We got a “Free and Easy” day the next day where we were basically free to roam the city on our own. 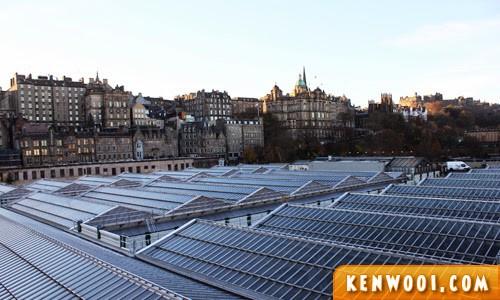 Edinburgh is very much a historical place comprised of the Old Town and New Town. Also declared as a World Heritage Site, the two main attractions are the Edinburgh Castle and the Palace of Holyroodhouse.

Also in Scotland, we headed further up to Inverness where we took a cruise at the Loch Ness in search of the famous mysterious Loch Ness Monster. 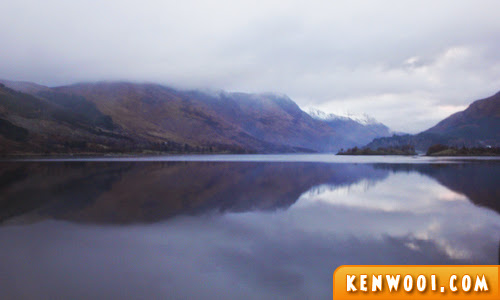 We also took a ride along the beautiful Scottish Highlands before staying our last night in Scotland at Arrochar, a small village near to the English-Scottish Border.

We arrived back in England and our immediate destination was Liverpool, a favourite destination for the fans of the Liverpool Football Club and The Beatles. 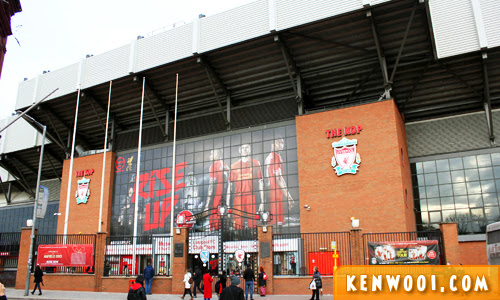 We were brought to Anfield Stadium for a quick stop for photography purpose. Even though I joined the Anfield Stadium Tour before, I’ve never been an avid fan of the Merseyside club.

After checking into the hotel, we were free to roam around the city.

We stopped by John Lennon’s childhood home, called Mendips, on the next day before leaving Liverpool. It’s now preserved by the National Trust. 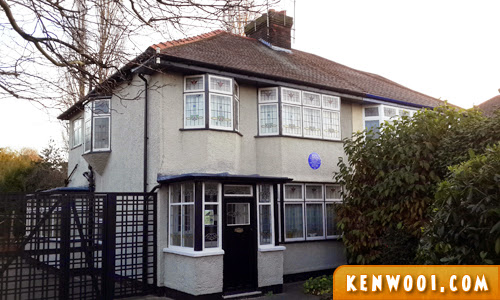 The only John Lennon song I listen to is “Imagine”, a song that encourages listeners to imagine a world at peace. I think Mendips is open for visitation but only at a specific period throughout the year.

Then we traveled to the birthplace of William Shakespeare, Stratford-Upon-Avon. 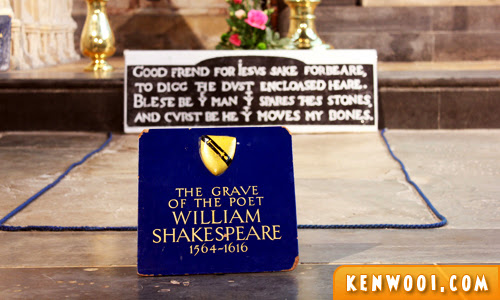 Home to theatre, literature and more historical stuff, we got a walking tour around the town and also to the grave of the well-known poet in a cathedral. Apparently no one is allowed to remove him from this grave, or else a curse will be cast upon the doer.

Subsequently, we traveled into Wales, another country that is part of the United Kingdom. 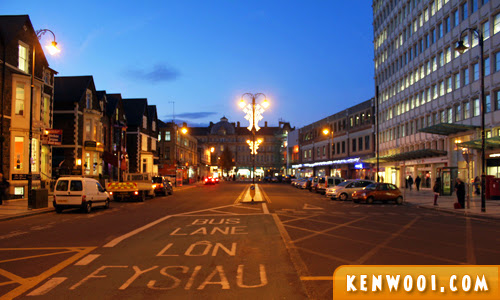 It was almost the evening when we arrived at Cardiff, the Welsh capital. We didn’t do much except to roam nearby the hotel at night. This stop was quite unnecessary since we didn’t explore much of Wales.

The last day of the Great Britain Tour brought us to Bath, another World Heritage Site. 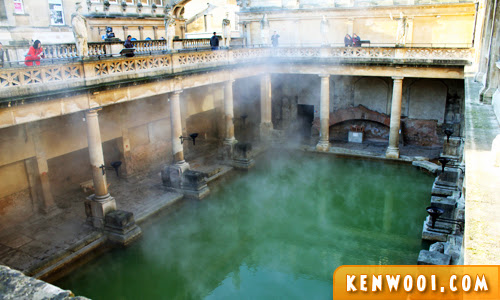 A walking tour around the town brought us to the Roman Baths, a natural hot springs area where the Romans use to take their bath. Apparently they think the hot bubbly water was some kind of magical water. Interesting.

The last attraction of the tour is none other than the popular Stonehenge. 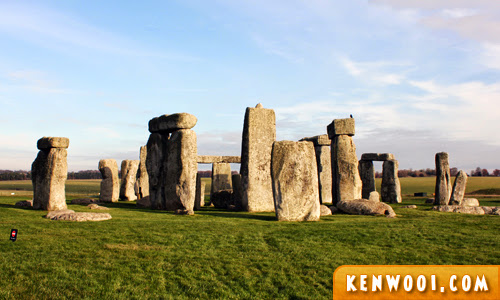 It’s basically a prehistoric monument formed with several huge stones in the middle of nowhere. It costs £8 (RM44.96) to enter into the area.

Lastly, the final stop back in London marked the end of the 7D6N Great Britain Tour by Expat Explore. I would say it’s definitely an eye-opening experience as we explore the historical features of England and Scotland.

Throughout the tour, we mainly stayed at 2 hotels – Premier Inn and Ibis Hotel. 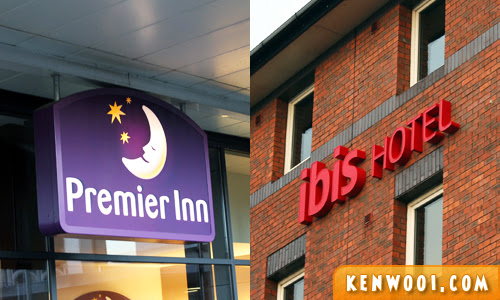 Yeah, I don’t deny – WiFi is a very basic necessity whenever we travel, right? ;)

The tour only comes with food in a form hotel breakfast. So it’s very common to have a typical English Breakfast every morning before we start the day. 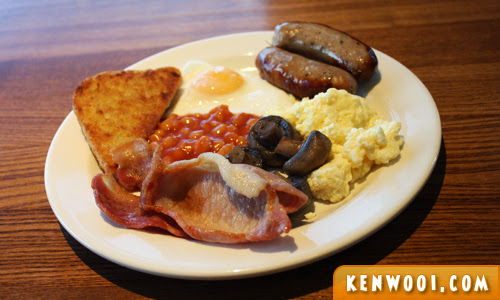 Honestly, I prefer having an English Breakfast for breakfast rather than the Malaysian favourites such as Nasi Lemak or some Chinese noodles. ;)

Anyway, it was definitely a memorable tour. Gotta thank Luke (tour guide) and Gary (coach driver) for the wonderful experience and knowledge shared. 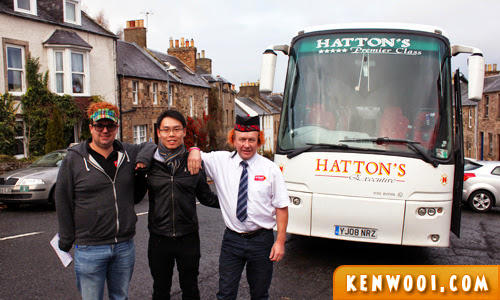 Oh, just in case you notices the ginger hair – they aren’t Scottish. They were donning a wig-cum-cap souvenir when we were at Scotland.

Now, let’s see what other tours I can book with Expat Explore. :)