As I’ve been to London several times, it’s always a dream to travel to more European countries.

And you know what – I managed to visit 5 additional European countries with Expat Explore during my Trip of a Lifetime!

Well, I’m usually not keen of joining travel tours but since I had a good experience with Expat Explore on my first tour with them, the Great Britain Tour in 2013, I’ve decided to purchase another tour – the Europe Taster Tour. 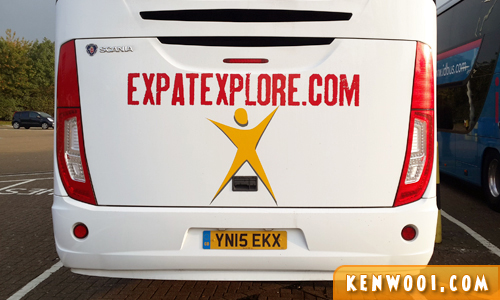 Furthermore, since a few countries are involved, I’d rather save myself from any logistics headache. ;)

The Europe Taster Tour is a 7D6N tour that travels to 5 cities in France, Switzerland, Germany, Netherlands and Belgium respectively.

Quick Review: Europe Taster Tour by Expat Explore brings travelers to beautiful European destinations such as Paris, Swiss Alps, Rhine Valley, Amsterdam, and Bruges. Explore exciting experiences such as canal cruises and a train ride to the Top of Europe! The accommodations provided are simple yet comfortable, and the tour guides really knowledgeable. Normal rate costs £699 (RM4,473) but it can go as low as £429 (RM2,745) for early birds.

After a few days in Copenhagen, we flew back to London and hopped on the tour the following morning. The coach picked us up at Greenwich Station, which is about a 10-minute walk from the hotel we stayed. 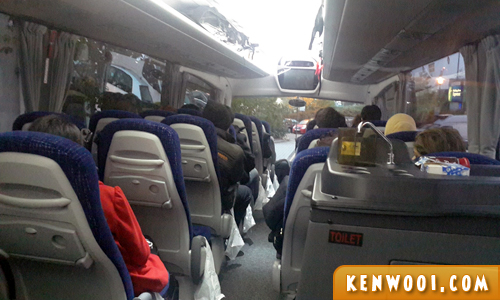 It was very exciting as the tour brought us to new countries like Switzerland, Germany, Netherlands and Belgium for the first time. Oh, it’s my second time to France!

Here are the places we’ve visited throughout the entire tour.

The journey from London to Paris took about 8 hours. It’s a long coach ride, but it was interesting to cross the English Channel via the Eurostar (the coach parked into a cargo train) and the view of the French country-side was beautiful. 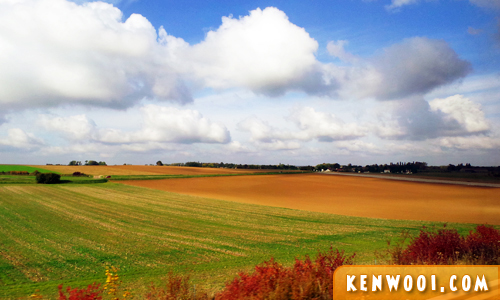 It was my second time here since my first Paris visit in 2009 – I did say I’ll be back in my Eiffel Tower entry. ;)

We were brought on a driving tour around the ‘City of Lights’ in the evening and were shown various landmarks. 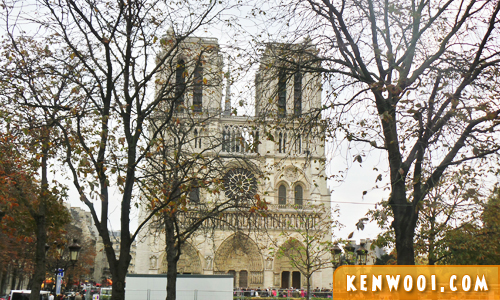 Dinner was provided at a restaurant, called Au Cadet de Gascogne, at the Montmarte nearby the Sacré-Cœur.

It was a “Free and Easy” day where we were allowed to explore Paris at our own pace. We have planned to visit key destinations beforehand and used the Paris Metro to get around. 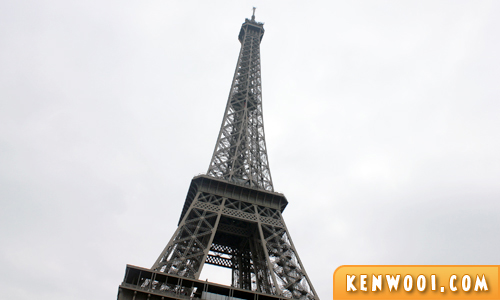 We’re not keen of French food, but managed to indulge on snacks like Gelato from Amorino and Macarons from Ladurée. 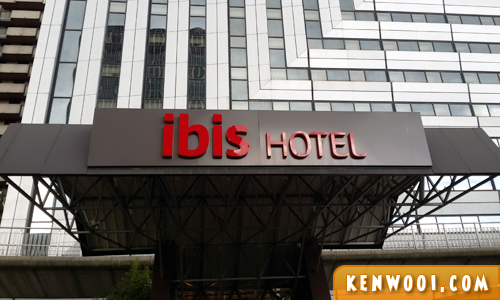 The accommodation in Paris was at Ibis Hotel at La Défense – simple yet comfortable.

We left Paris early in the morning and the next journey took about 8 hours to arrive at our hotel at the Swiss Alps. 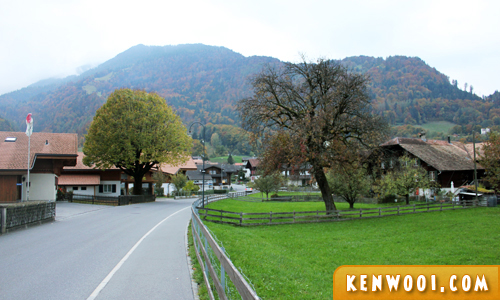 It was already evening, once again, by the time we arrived. We took a stroll around the vicinity of the hotel – apparently it’s very safe to be walking around.

Dinner was provided by the hotel. Simple food, but it got us ready for tomorrow’s adventure to the Top of Europe!

It was also a “Free and Easy” day at the Swiss Alps, but we decided to follow an optional excursion to Jungfraujoch, the highest train station in Europe! 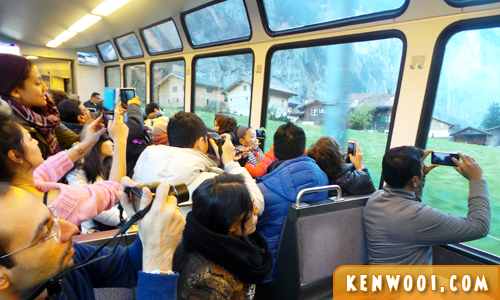 Yeap, a lot of photos already taken even on the trip up itseslf. Wait till you reach the peak!

The return train ride costs CHF170 (RM765!!) per adult – it’s a discounted price for group booking by Expat Explore. After a 2-hour train ride up (with interchanging stations in between), our eyes finally feast on the breathtaking view of the peak!

The scenery of the surrounding glaciers and snow-capped mountains was superbly mesmerizing. Superbly jaw-dropping! 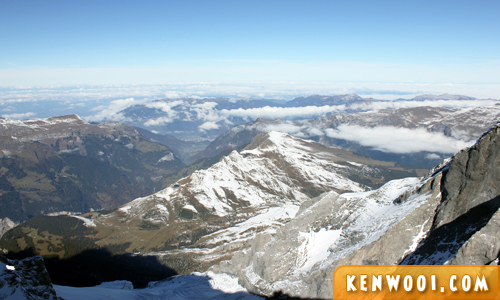 Fortunately for us, the weather was amazing on the day we were there. So we were able to capture loads of beautiful photos! Also, I proposed to Shane there! More on that later. ;)

We were there for about 3 hours before heading back down to Interlaken where we had a quick visit and bought some Swiss souvenirs.

Anyway, the best accommodation throughout the tour goes to… Hotel Alpenrose! 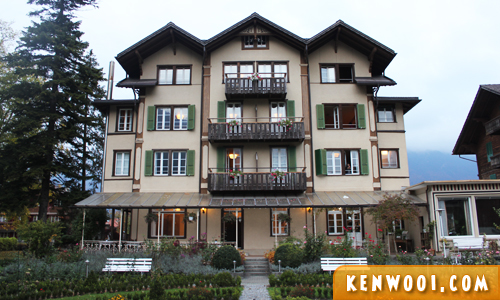 This little cottage has the most comfortable bed ever! We were very relunctant to get up the next morning! :D

Germany is a destination, but it’s not the usual known cities such as Berlin, Munich or Frankfurt. 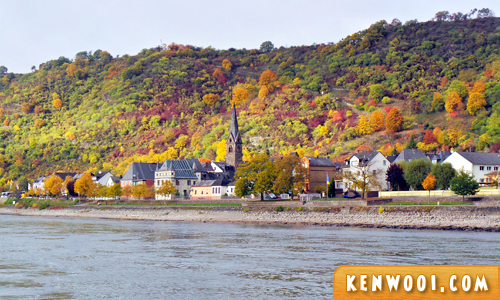 Instead, we visited a little town called Rhine Valley where we went on a riverboat cruise along the valley. This is the most concentrated stretch of castles in all of Europe, with vineyards on mountain slopes.

We also tasted delicious ice wine. I didn’t know that “wine” can be sweet! *mind-blown* 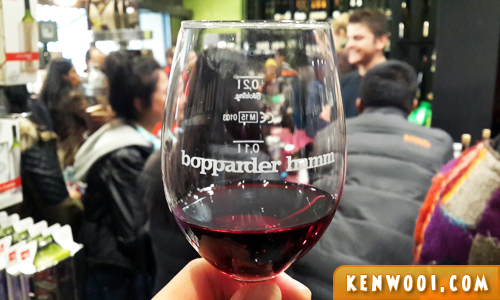 We were treated with a wine-tasting session at a local wine store. We enjoyed the sweet ice wine so much that we eventually bought 1 bottle which costs €30 (RM135).

Germany is also known for its cuckoo clock and Birkenstock shoes – but we didn’t get any of that. On a tight budget! 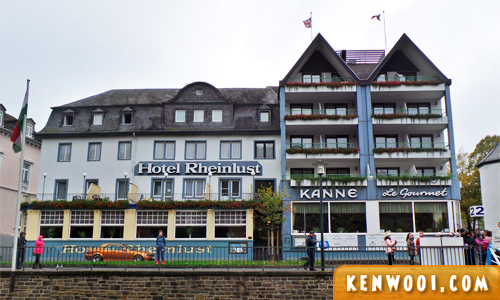 The accommodation at Rhine Valley was supposed to be Rheinlust Hotel (it’s written on the tour leaflet), but we were assigned to a guesthouse behind Rheinlust.

It was probably full-house at Rheinlust that night, but we’d definitely prefer to stay at the main accommodation. :)

After Rhine Valley, we departed to the country with my favourite colour as its Royal Family’s colour – Netherlands! 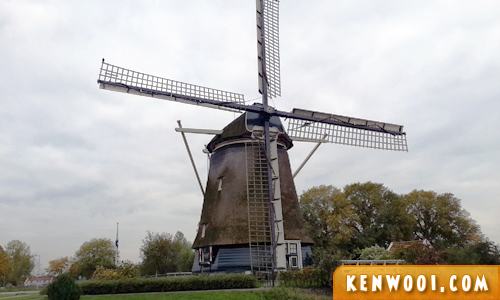 We were brought to a farm to watch how the famous Dutch clog is made, and also listened to how traditional cheese is made.

Later in the evening, we took a short walk to the Amsterdam canal cruise where dinner was served on board. 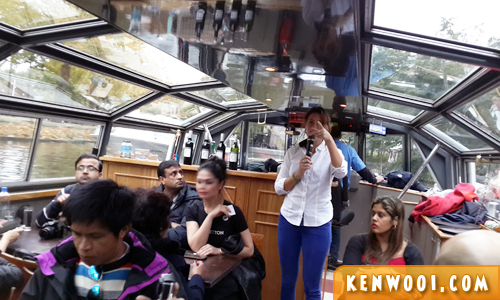 After the cruise, we joined our tour guide for a walking tour to the infamous Red Light District! Well, it’s not as “rude” as it initially sounded.

According to the tour guide, most of the prostitutes have gone online to offer their service. Hence, lesser prostitutes appear on the “window display” nowadays. 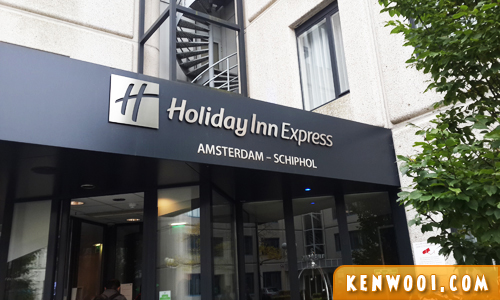 On the tour’s last night, we stayed at Holiday Inn Express at Schiphol – away from the city center, and closer to the airport.

Really enjoyed the comfort of a modern room.

The tour’s final day brought us to Bruges before heading back to London! 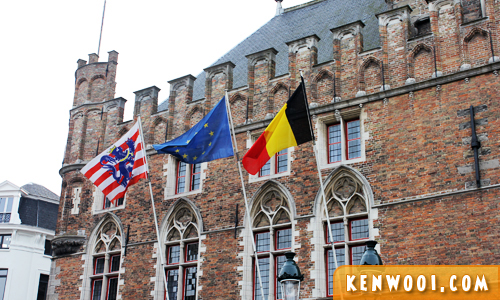 Famous for its beer, waffles, chocolate and fries, this is definitely a good place to spend money on food. We bought some Belgian chocolates, fries with mayonnaise, and Belgian waffles! 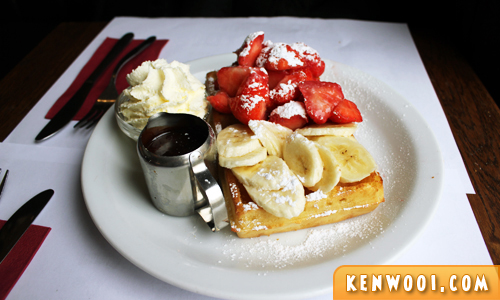 This has to be the highlight of the quick 2-hour stop at Bruges. The order above costs €12 (RM54) and we liked it!

To return to London, we took a cruise across the English Channel from Dunkirk Port, France. After the 2-hour cruise to Dover Port, England, the coach continued its final leg to Greenwich Station. 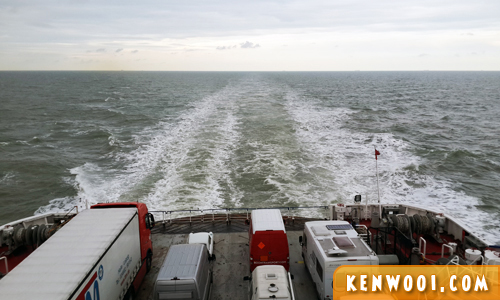 Overall, it’s an eye-opening experience as we discovered beautiful scenery at Paris and Swiss Alps, plus quick explorations into little cities like Rhine Valley and Bruges. Amsterdam has a unique experience with the canal ride and walking tour to the Red Light District.

Holly, our tour guide, has been great by providing us key information on our whereabouts and fun facts about each destination. 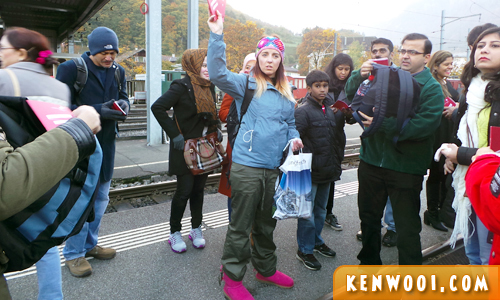 Her trademark phrase would be “Alright, everybody. Wakey wakey!” with a high yet soothing tone. She uses that every time we arrive at a destination.

Anyway, it was definitely a memorable tour. Also not forgetting, Jamie, our coach driver for his skillful maneuver around each cities. 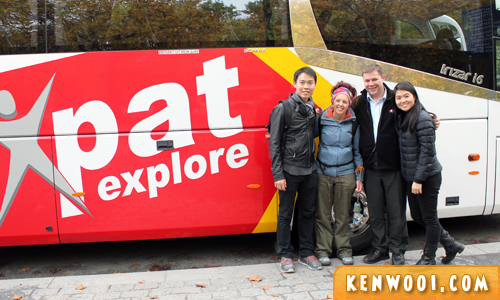 Thank you, guys, for the wonderful experience!

Would we go on another tour with Expat Explore for the 3rd time? Sure thing! :D