During our Trip of a Lifetime, Netherlands was the next and fourth destination when we were on the Europe Taster Tour with Expat Explore.

Similarly to Swiss Alps, Rhine Valley and Bruges, it was our first time being in this country. 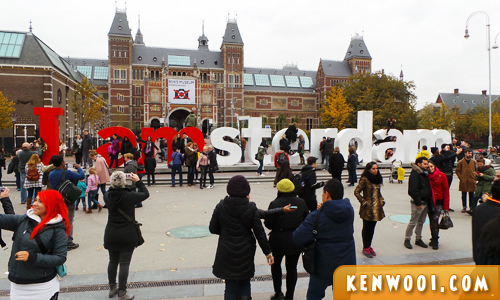 We started our journey from Rhine Valley, Germany on the fifth morning of the tour and upon entering Netherlands, our first stop was at a windmill. 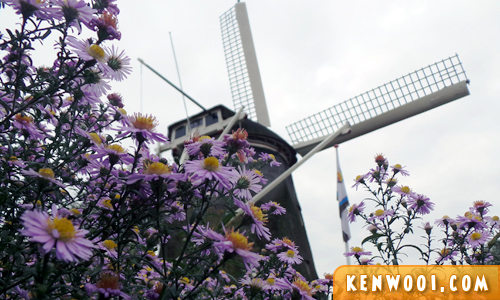 Windmills are one of Netherlands’ best known icons. Historically, the windmills served many purposes. The most important one was to pump water out of the lowlands.

Our crib for the night was at Holiday Inn Express at Schiphol – quite a distance away from the city center, but closer to the airport. 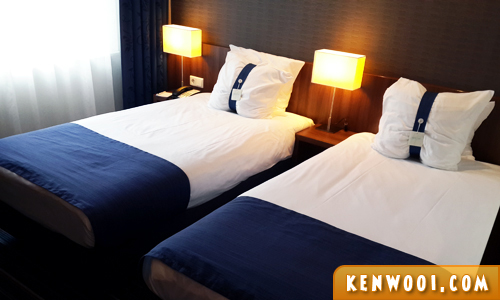 Holiday Inn Express is a quite a reputable hotel chain and I like its modern concept. Definitely a good way to spend the last night of the tour.

Next up, we visited Clara Maria Cheese Farm and Clog Factory to watch a Dutch clog-making demonstration and cheese-tasting. 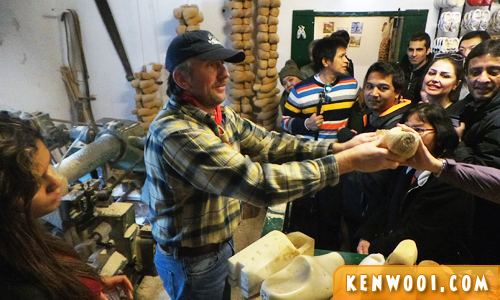 Clara Maria is located just southwest of Amsterdam and this 160-year old farm is owned by a couple who inherited it from a few generations ago.

We first watched a clog-making demonstration of how a piece of wood gets shaped into a clog. Authentic antique machines are used to carve the outer and inner shapes of the wooden clogs. 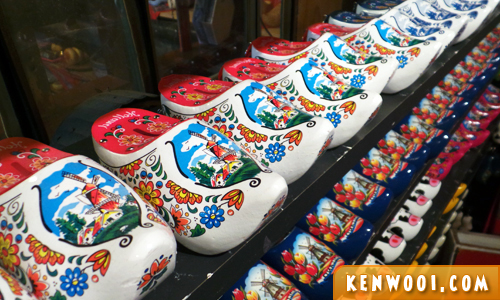 There are a large variety of clogs ranging from plain ones to colourful ones depicting the Dutch landscape.

After that, we moved on to listen to how traditional cheese is made. 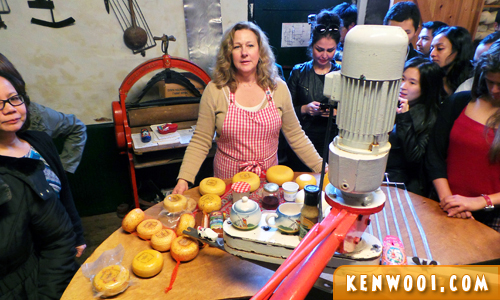 The wife of the owner is an American but has settled down in Amsterdam for a couple of years. She explained how the traditional cheese is made and the process of preserving them.

Besides that, she also shared with us the various ingredients infused with cheese, such as chili and truffles. 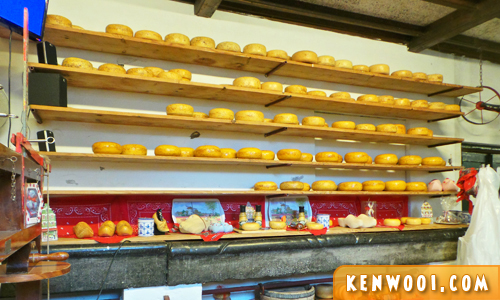 I personally love cheese. It’s one of the yummiest things around. ;)

After Clara Maria, we headed in to Amsterdam to explore the city before joining a Canal Cruise. 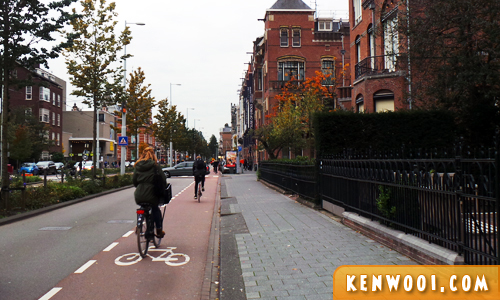 The first heads-up we got from the tour leader was that there are a lot of cyclists around the city, and most of the bicycles don’t have brakes!

Therefore, we have to watch out for oncoming cyclist whenever we cross the roads. There are even dedicated cyclist lanes on the road and pedestrian walkway too.

We also came across the iconic “I Amsterdam” sign during the walking tour. It was a great chance to take a photo of it, but… 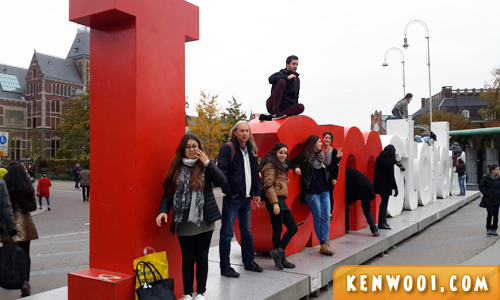 How to take lah when there are so many people swarming around the sign? I ended up just taking photos of people posing with it.

At the end of the stroll, we hopped on a canal cruise. 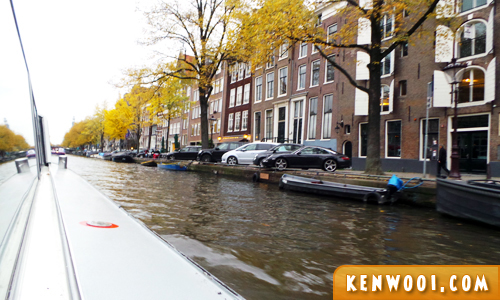 This is the one of the ways to experience Amsterdam and its 17th century architecture. As we cruised past the buildings, the cruise leader shared with us interesting tips and insights regarding key landmarks.

We also had our dinner on the cruise – pizza. Yes, pizza. 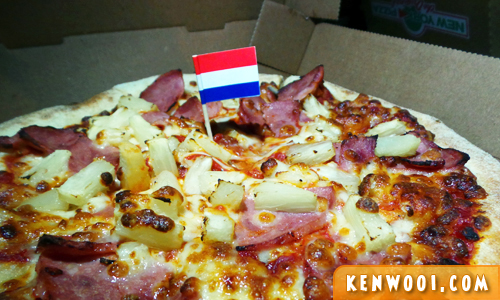 Apparently the Dutch doesn’t have any prominent or famous local food – it’s a mixture of every known food from other countries. Even the pizza box is labeled as “New York Pizza”.

After the canal cruise, we had the option to join our tour leader for a walking tour to the infamous Red Light District!

Feeling all curious, we went for it. As we approached the district, we were greeted with some interesting sex-related stuff… like condom. 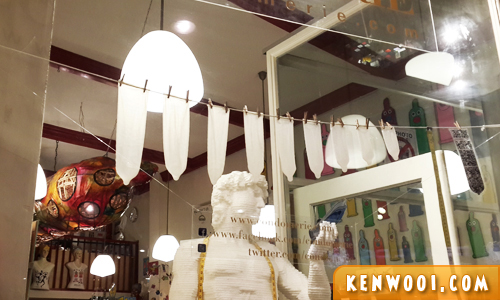 Here lies the various sizes available for condoms. I think mine would be the most left. Heh. I kid you not!

As we were getting closer to the Red Light District, there was this bronze plate depicting a hand holding on to a woman’s boobs. Our tour leader said that there’s a legend that says that if someone touches it, he/she will definitely return to Amsterdam again. 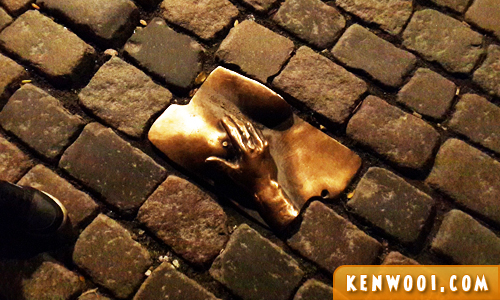 I touched it, and I definitely wouldn’t mind coming back to Amsterdam again.

We then proceeded to the Red Light District, our tour leader told us that it’s gonna be “rude” there. Well, to be honest, it turned out to be not as “rude” as it initially sounded.

We saw some ladies in lingerie standing at the window display. If the curtains are closed, it means “business is on”. Heh.

Wanna see some boobies? Scroll down. 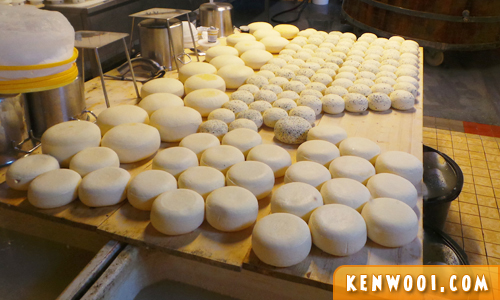 Oh wait, these look like… cheese blocks actually. Gosh, my eyes must have deceived me!

Anyway, most of the prostitutes have gone online to offer their service nowadays. Hence, lesser prostitutes appear by the “window display”.

Oh, what a waste! I should have visited Amsterdam years ago!

One thought on “Boob Sighting at Amsterdam’s Red Light District”