It has been more than a year ago since I underwent Lasik Surgery with Optimax Malaysia. Time flies!

To begin with, I’ve been wearing glasses for as long as I can remember… since primary school. I can still recall my dad opting for plastic glasses so that ‘clumsy’ me wouldn’t wreck it.

Honestly, I was embarrassed when I had to wear glasses at such a young age. But having glasses became a norm as I grew older – it became a crucial part of me… for without, I wouldn’t be able to see a damn thing! 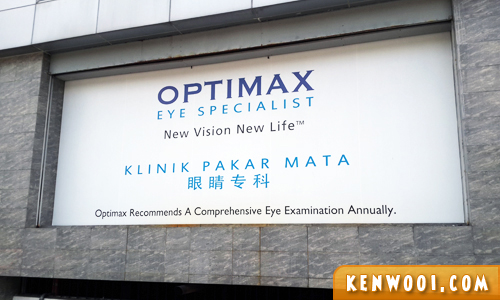 Plus, I’ve never wore contact lenses because I didn’t dare touch my eyeballs!

Anyway, I was contemplating whether or not I should “do something” about my eyes. This thought was somewhat influenced by my mum since she did Lasik Surgery 10 years ago.

So after working for a couple of years, and feeling that I have “enough” cash to splurge on my beloved eyes, I decided to surf Optimax’s website and dropped an online inquiry.

About 2 hours later, an Optimax customer service personnel called me. She spoke to me about Lasik Surgery, set an appointment for an Eye Checkup, and the rest was history. 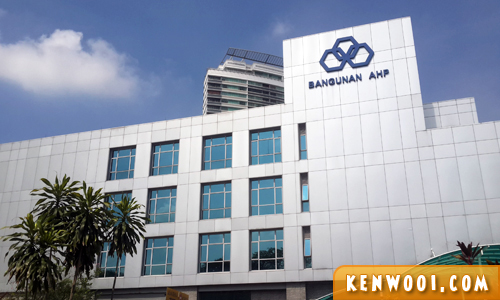 My first visit to Optimax was at its headquarters at Bangunan AHP, TTDI.

Before qualifying for a Lasik Surgery, I had to go through a couple of eye tests, such as assessing the cornea thickness, the eye pressure and… basically the condition of the eye. It was to ensure that my eyes are healthy and fit for Lasik Surgery. 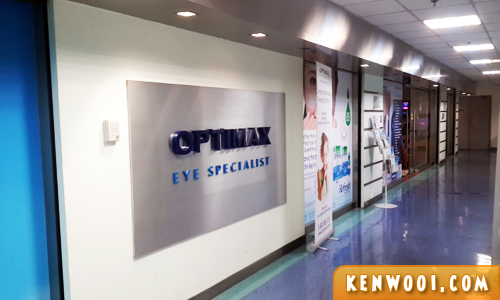 The Eye Checkup costs RM195, and it was only the tip of the iceberg before committing to a larger sum for the Lasik Surgery.

In case you’re wondering, my reasons for doing it were simple… convenience (not sure how do I explain it, but basically 1 less accessory to think about) and for sports / exercise (I do badminton and run, frequently). 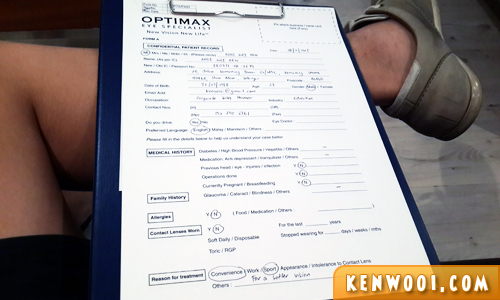 After the Eye Checkup, the optometrist said that my eyes were good for the surgery. There are 3 types of Lasik Surgery available and they are priced differently. Here are the prices for Lasik Surgery at Optimax (approximate as of 2015):

We discussed on the suitability and I decided to go for the second one, Customized Femto-Lasik.

Despite the first and second options being the same price, I didn’t choose the former because the cornea’s surface will be disposed and a bandage contact lens will be used subsequently. Sounds painful and cumbersome. On the other hand, the ReLEx Smile has better advantages (minimal cornea cut, lesser pain) but it was rather expensive.

To put my seriousness in check, I had to pay on-the-spot. After much deliberation, I reluctantly (hey, it’s quite expensive alright!) swiped my credit card, and booked a session with Dr. Stephen Chung, the pioneer ophthalmic surgeon in Optimax Kuala Lumpur. 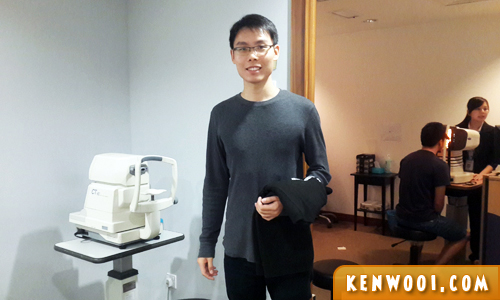 3 weeks later, the moment has arrived. I was all set to gain a better vision.

But frankly, I was really anxious. I mean… this is my FIRST EVER surgery, and it was for my EYES. What if something went wrong? I’d be totally blind for the rest of my life! Crap weh…

Those crazy thoughts were real, but I can’t chicken out after paying, right? 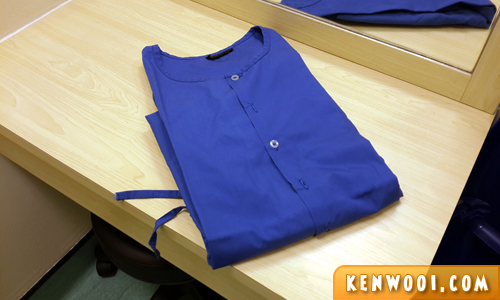 I was given this blue scrubs to change into. 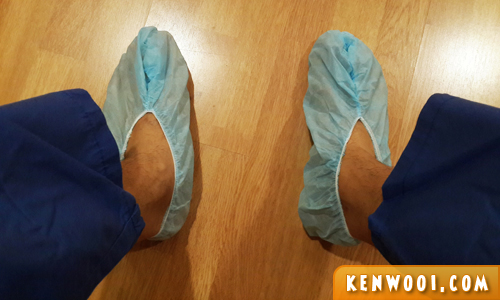 I also removed my shoes and put on this blue cotton-ish footwear. Perhaps it was a measure to prevent the surgeons from getting hurt if patients ever kick them.

I had to wear a shower head cap too… but I ain’t going for a shower. 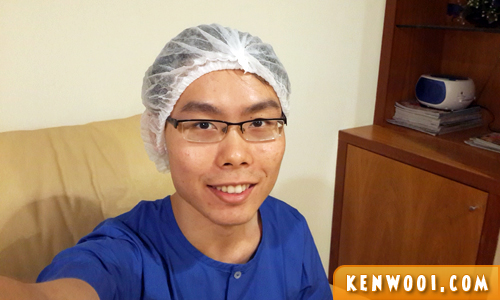 Well, this was the last selfie (I don’t usually selfie) with my glasses on. The next phase was the moment I’ve been anticipating – the Lasik Surgery!

I wished I had photos to share, but no phones were allowed in there. So I’m gonna explain the experience as detailed as possible in words (and some made-up photos).

Once I was in the treatment room, Dr. Stephen asked me to lie down on a treatment bed with all sorts of equipment surrounding it. After lying down, he used the Eye Speculum to keep the eyes opened. I think he had to use some force because my eyes were really stubborn (especially the left one). But they gave in, nonetheless, and the eyes could no longer blink… AT ALL.

At that point, I surrendered my eyes to Dr. Stephen. They were in good hands.

He started off with my right eyes by dripping several droplets of liquid and anesthetic into the eyes. It felt really uncomfortable, as though my eyes were drowning! After that, he pressed an equipment onto my eyeball’s surface to slice (using laser) the cornea into a round flap.

It was pitch black, and I felt vulnerable. Seconds later, white slicing lights appeared as if a ninja was slicing through a black cloth. Something like this… 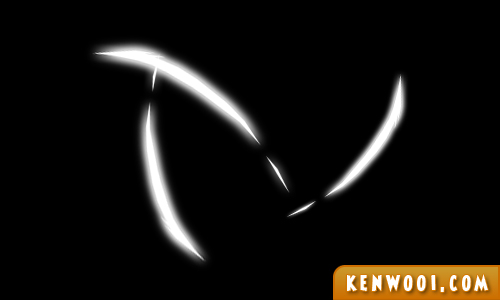 When it was done, the equipment was released from my eyeball. Dr. Stephen then used a tool to open up the flap. Once the flap was opened up, my vision went totally blurred. Droplets of anesthetic were dripped once again.

The “blurred” view is similar to the view you get when you’re driving during a heavy downpour.

Anyway, I was asked to keep staring at a blinking green light in front of me. It was meant to ensure that my eyeball is aligned. 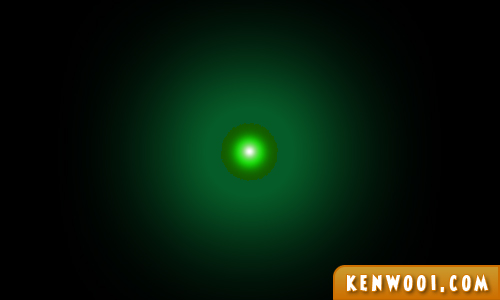 There were times when my eye started to “stray off”, but Dr. Stephen alerted me immediately and gave me comforting words.

Next up, the main laser was used to laser off the exposed cornea surface. Shattering red lights were visible during the procedure as he count down from 10 to 1. Burnt smell was apparent too.

Dr. Stephen then closed the cornea flap back onto the eyeball and positioned it back to its original place. Suddenly, his finger was literally rubbing against my eyeball as he was adjusting the cornea flap. Super overwhelming!

The whole procedure for the right eye took about 5 minutes max, and the left eye was next. The same steps were taken and within 10 minutes, I was escorted out from the treatment room.

I couldn’t see properly at first. It was grayish blurry and my eyes couldn’t open comfortably. After a quick post-surgery check by Dr. Stephen, I was done. 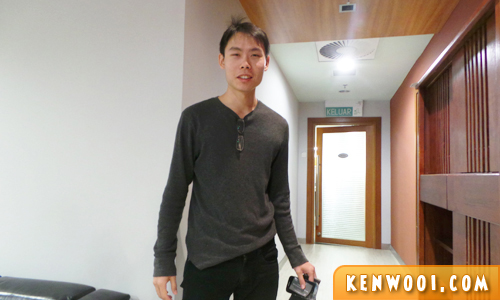 This was how I look like when I exited the treatment room. Damn, like a Korean superstar, right?

Anyway, I was home-bound after that. Moments later, my eyes started to hurt as the anesthetic wore off. It felt prickly and the bright daylight contributed to the discomfort.

I washed up and went to sleep. I literally KO-ed. 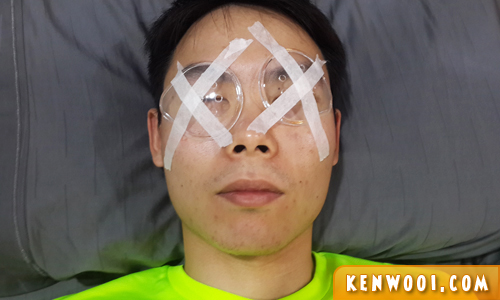 Eye shields were used during my sleep for the first week to avoid any unintentional contact on my eye. Its purpose was to prevent the displacement of the cornea flap during its recovery.

Besides the eye shields, I was given pain killer (to be consumed only if pain is unbearable), antibiotic eye drop (4 times a day for the first week) and Refresh Plus lubricant eye drop. 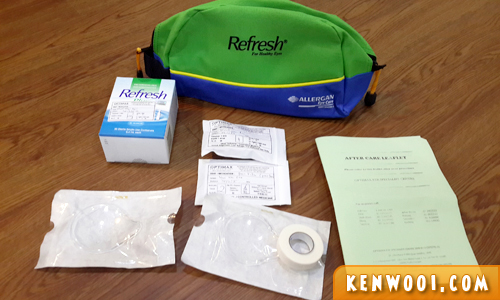 Hours after the surgery, I was able to see clearly without my glasses. I can surf Facebook on my mobile from arm’s length, which I was barely able to then. It was like… WOAHH!

However, the vision hasn’t been crystal-clear particularly for far-distanced objects. Nevertheless, I’m able to watch television, work on laptop and read books without any difficulty. It’s good enough to get through the day, but not good enough if I’m seated far away from the presentation screen at work.

I returned to my usual daily routine (driving, exercise, and work) within 1 week.

On the flip side, my eyes were continuously dry (and sometimes slight pain) for the first 6 months. I had to keep purchasing eye drops to lubricate my eyes. 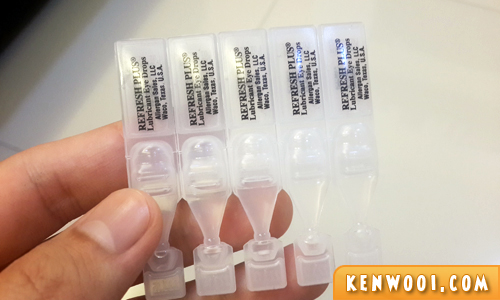 There were constant post-surgery checkup to assess the recovery progress of the eyes. It was at intervals of 1-day, 1-week, 1-month, 3-months and 6-months after the surgery. 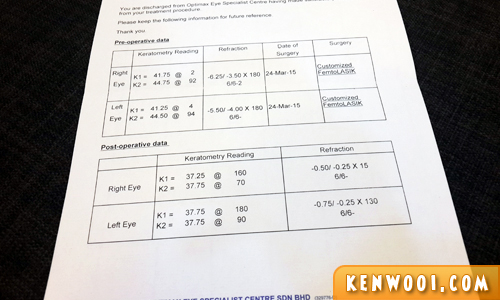 After the 6-months checkup, I was officially discharged. By then, I still didn’t get my “crystal-clear” vision, but since the treatment is life-time guaranteed, I can undergo the Lasik Surgery again if ever I’m not satisfied with the results. Well, I’m not THAT satisfied (I was expecting 100% clear vision) but let’s see how things go.

I was also told that my cornea is still thick enough for another round. Honestly, I feel like doing it again, but perhaps 2 or 3 years later after my eyes have stabilized. 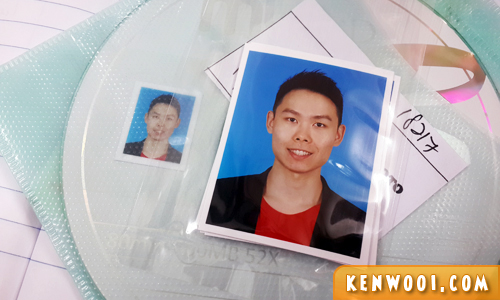 So that’s the story of how I became glass-less with Lasik Surgery. It was absolutely one helluva experience!

Today, it has been more than a year since I stepped out from the treatment room at Optimax. The 10 minutes experience was really overwhelming but I was truly glad that I’ve overcome it.

44 thoughts on “My Lasik Surgery Experience with Optimax”