As part of our Memoirs of Manchester, we visited Old Trafford twice in a span of our 3 days trip. We went on a Stadium Tour and watched a home match between Manchester United vs Swansea City during the EPL 2016/17 Season.

Simply said, Old Trafford was the highlight and priority of this detour to Manchester. Number one item on our Manchester itinerary was to head to Old Trafford stadium the first morning we’re in Manchester. 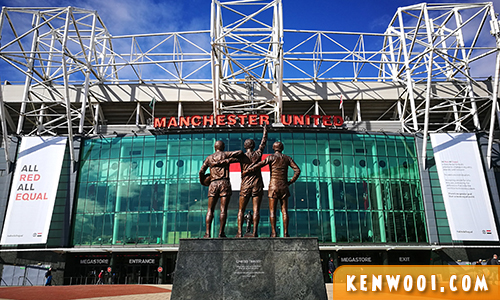 It was approximately 20 minutes ride via Metrolink and travelling by foot to the stadium from the nearest Metrolink station. Round trip from “City Zone” to “Old Trafford” station was £3.20 per pax (off-peak). 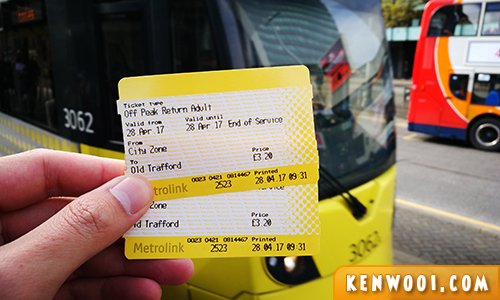 Prior to arriving in the UK, we attempted to purchase match tickets but the process wasn’t as user-friendly. It was our first full day in Manchester and a Friday. Never a better day to be at touristy spots than on a weekday! It was a breeze getting to the stadium with lots of time to contemplate if we want to join the Old Trafford Museum and Stadium Tour, which we did (ticket price per pax: £9, as at April 2017).

Needless to say, we also scored ourselves match tickets from the Ticketing & Membership Services counter located at a separate building which was a short walk away from the stadium with no need to queue. Brilliant, eh! Each match ticket is priced at £41.20 (as at April 2017). Price varies depending on which stand you’d like to be seated at.

We even got our Member Cards on the spot! Love the Red (Devils)! 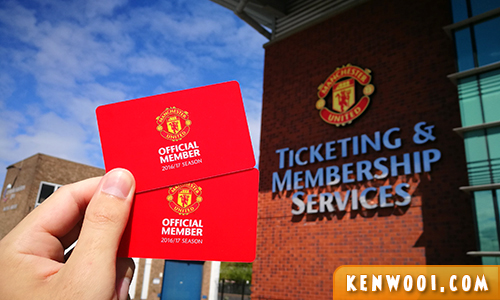 I grew up in an extended family of MU supporters and also married an MU fan boy. But my knowledge of the Club is really limited because watching 11 men chasing after 1 ball has never been my thang. I only know it as the greatest football club of all time (Arsenal, Liverpool, Chelsea fans please don’t hate me) so the Museum and Stadium Tour was the best way for a total noob like me to be educated on what made MU awesome! 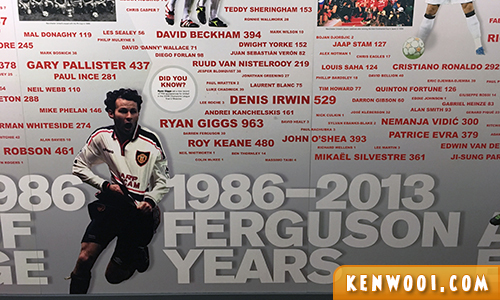 Walking through the Museum’s glimmering halls of fame of trophies, memorabilia section, floor-to-ceiling timeline of achievements and stations to test how well you know the Club / Players, past and present. Uhm… something like History class. 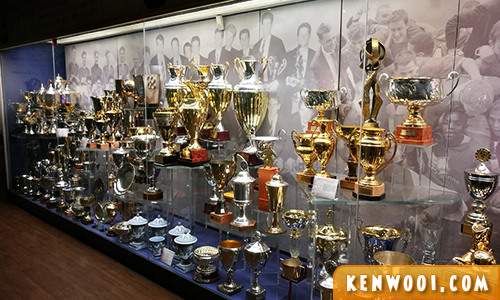 If this was a test, I’d have flunked with “Distinction”! Check out the video below.

While waiting for the scheduled time of the Stadium tour, we decided to have lunch at Red Café which was a Manchester United theme restaurant/bar. We had fun choosing a table with our choice of players labelled on the chairs. Yes, I chose Rooney :) 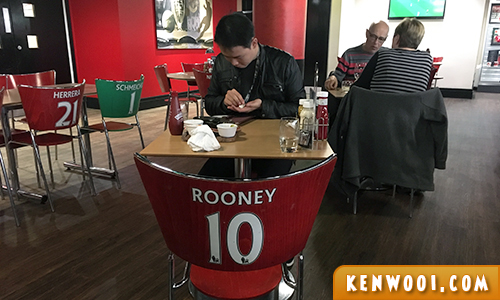 You know how thematic cafés are usually great with their interior but not so with the food? The Red Café is worth mentioning because food was really good! We ordered the Classic Fish & Chips and Homemade Nachos to share (£17.90). The Nachos are not your typical commercialised type. The texture is more like samosa skin with no fillings, topped with cheese and Jalapeño. It also comes with three types of sauces – sour cream, guacamole and tomato puree. 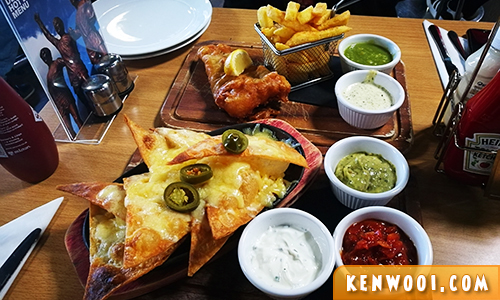 With our bellies filled, it was time to feed our imaginations with a tour in The Theatre of Dreams. 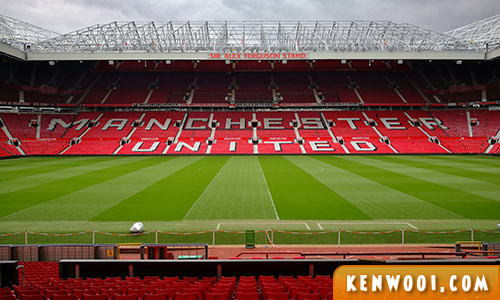 A group of us were escorted by one of the Stadium’s staff where she shared significance of sections in the Stadium and even gave us a feel of what it’s like to be in the Pressroom. Not forgetting to stop by the notable dugout which featured the many epic faces of Sir Alex Ferguson during his time as Club Manager. 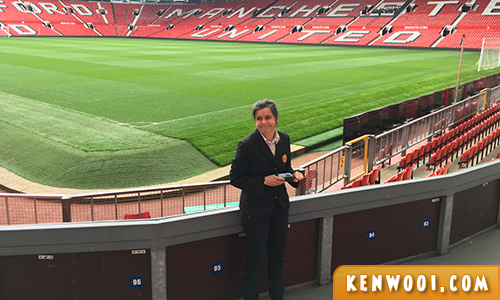 Another thrilling experience was when they aired the music for Players to run out to the field, we were given the cue to walk out to the view of Old Trafford’s glorious world class turf and sea of red. 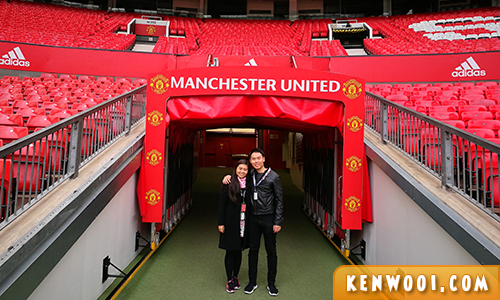 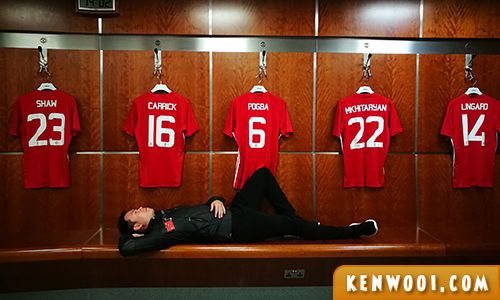 Fast forward to Sunday, 30 April 2017 where we were back at Old Trafford to experience watching a match LIVE! A first for the both of us and we sure did dressed our best. 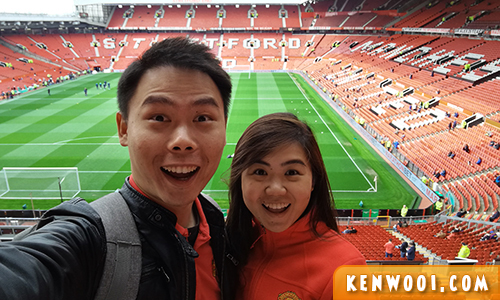 Hotdogs are a must before a match. 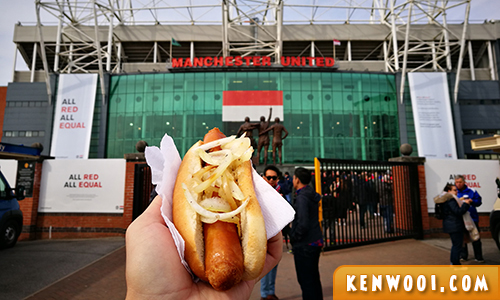 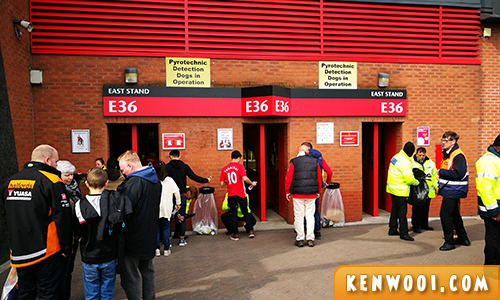 It sounds almost cheesy and cliche to describe how it felt being there. Euphoric is an understatement, the wave of unity and resounding cheers were extremely contagious! This explains how overseas Red are so mad with passion just by watching it through a black box, even though they’re thousands of miles away from the Red Devils. 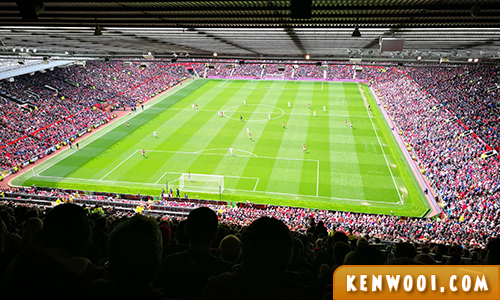 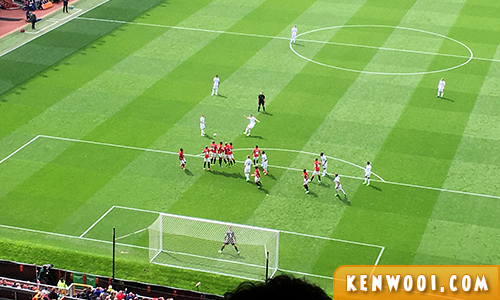 We found ourselves muttering “wow” many times throughout the whole experience. 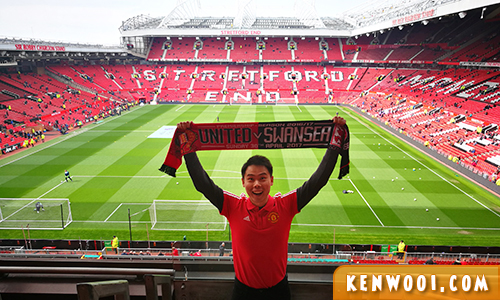 Whichever stand of match day tickets you’ve got, you’re definitely in for a treat. For a split second, I had a gush of envy thinking how conveniently accessible the Brits are to this iconic stadium and live matches at an affordable pricing (if you were to earn in £, that is).

The game ended with a draw, much to the fans disappointment. Even so, the beauty of it was that the chants of support for both Clubs didn’t dampen the slightest bit. For us, just BEING THERE was exhilarating already.

This sums up our Manchester chapter. Up north we go to Edinburgh! Stay tuned!

One thought on “Manchester-rific Experience”