I’ve heard and read so much about the beauty of Edinburgh that I had to experience it first hand. Given that Ken has been here, the activities we looked up for this 2D2N trip were things we could do together for the first time. 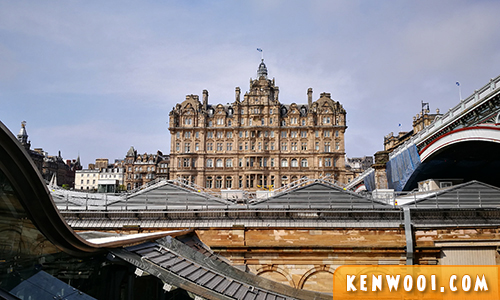 We took the TransPennine Express from Manchester Piccadilly station to Edinburgh Waverley station. A one way ticket costs us £23.75 per pax. 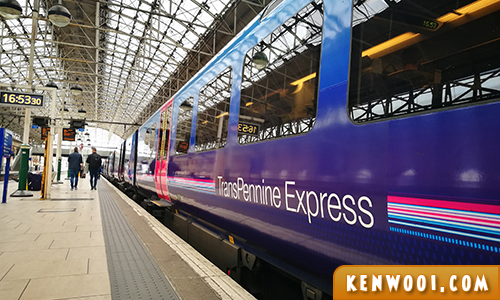 How to get cheap train tickets?

Ken and I registered for the Two Together Railcard months before our trip as we had to have the physical card delivered to us in Malaysia. The card works in a way where you’ve got to travel with the same partner as both your personal details, along with your photos attached during web registration. With this card, you’ll both be able to enjoy 1/3 off rail fares. This applies to most adult fares (i.e. 16 years and above) throughout Great Britain, except during morning peak times.

The Railcard costs £30, which makes it £15 per pax. Most importantly, you must have your Railcard with you when buying tickets and travelling.

The journey from Manchester to Edinburgh took us approximately 4 hours and we arrived in the evening. Checked in to our hotel, Travelodge Edinburgh Central Waterloo Place, which was strategically a short walk away from Edinburgh Waverley station. 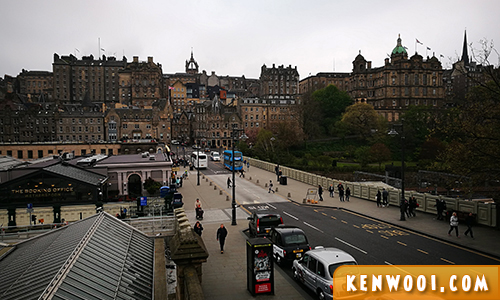 Being here felt so surreal as we took a stroll along the streets of Edinburgh’s New Town.

Woke up to a jam packed day of activities! With an empty stomach (thinking we’d be done in time for breakfast, totally not advisable guys), we set off on a hike to Arthur’s Seat. 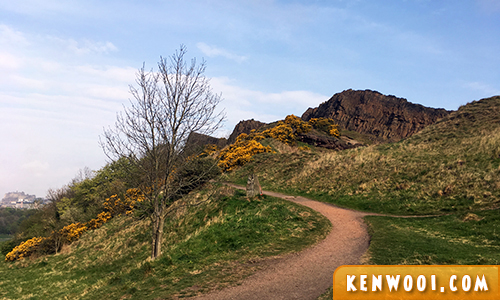 The hill rises above the city to a height of 250.5 m (822 ft), provides excellent panoramic views of the city and beyond. It came highly recommended and we were told that it’s relatively easy a climb. Accessible from almost any direction, the easiest and simplest ascent is from the east, where a grassy slope rises above Dunsapie Loch. 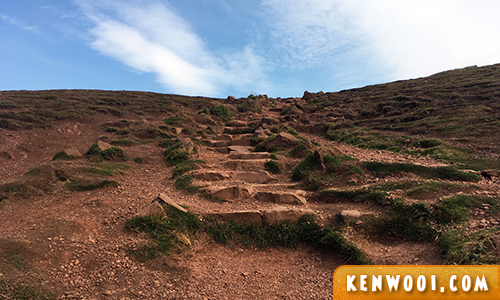 They lied! Our hike was a constant confusion of deciphering which peak is THE peak. We also kept questioning ourselves why did we choose to torture (okay la, it wasn’t as bad) ourselves on our Honeymoon. Let’s not even get to the steep ascents.

Here’s a snippet on kenwooiTV of how I almost gave up with Ken chuckling in the background.

The view along the way up though, was extremely rewarding. What was supposed to be a morning activity took up the first half of our day. We started off bright and early at 8am and descended at 1pm. A whopping 5 hours?! Okay, done and dusted, never again! 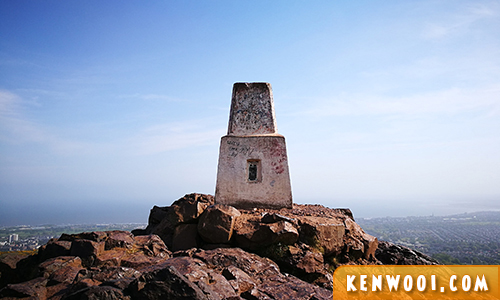 We had our first meal of the day at Café at The Palace because The Palace of Holyroodhouse was the first place we came by that smelled of FOOD! 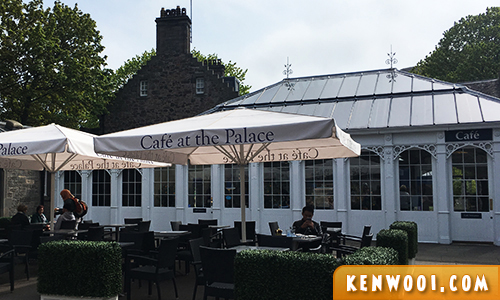 Beautiful garden of tulips, isn’t summer just the best days to be here? 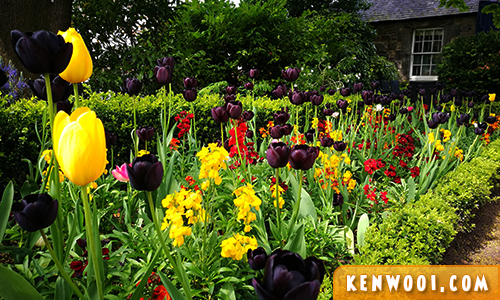 Heeding recommendations that Scottish haggis are a must, we ordered the Traditional Scottish haggis, neeps, and tatties along with a cuppa hot chocolate and a slice of cake to share (£15.50). 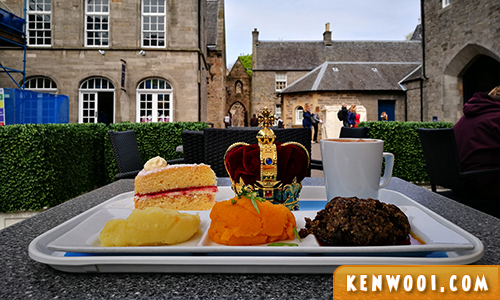 With barely half a day left, we quickly continued exploring the Old Town of Edinburgh. Walked the Royal Mile, took a quick walkabout around the internal perimeters of Edinburgh Castle and marched on the uneven grounds and many stairs of Edinburgh. 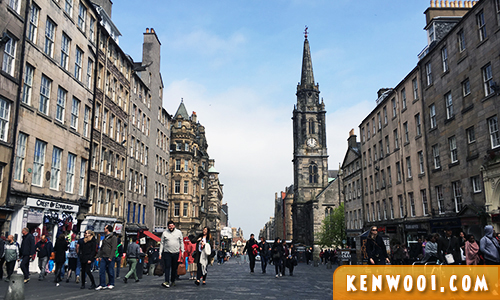 Greyfriars Bobby, where we stood from afar and took photos of the outlook only. 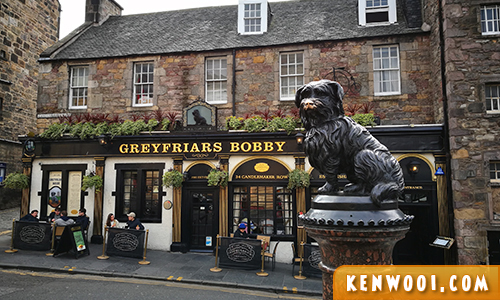 We had a destination in mind to wander off to – The Elephant House, iconically known to be the “birthplace” of Harry Potter as a character by J.K. Rowling. There was a queue but it didn’t take us long to be seated. 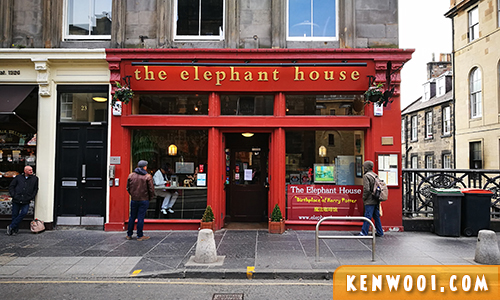 We liked that it was a cozy place, very English in fact and menu prices were decent. A cuppa Cappuccino and an Apple Pie came up to £6.50.

Tried our luck with cherry blossom spotting as we walked south of the city centre towards University of Edinburgh to get to The Meadows. It is a large public park and boy, was it a beautiful sight! The Scottish gloominess barely shadowed the endless lines of cherry blossom trees. 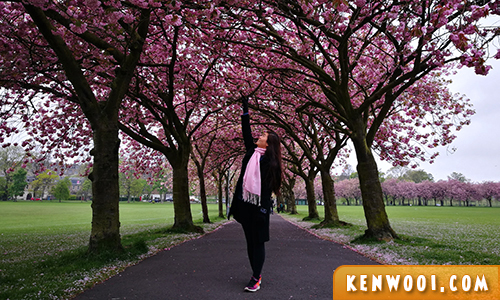 By the end of the day, we clocked in a whopping 27,000 steps. With hearts filled with gratitude for the beautiful weather, we knew there was more of Edinburgh to be explored and that we will definitely be back again! 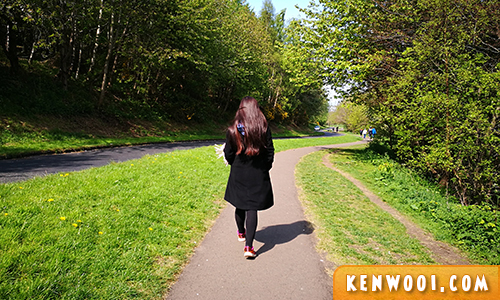 For now, let’s bring the sunshine on to Isle of Skye!