If Paris has been awarded the title of ‘the city of romance’, it must be because the people handing out the award never visited Italy’s beautiful capital city of Rome. Don’t get us wrong – we have nothing against Paris, it’s a stunning city – but there’s something about Rome that just takes the breath away. From it’s modern amenities to the structures that have stood there for as long as there’s been civilization in Europe, there’s history and adventure hiding around every corner in Rome – so much so that it’s difficult to know what’s worth your time to see, and what isn’t.

The short answer to that conundrum would be to go and see everything, but that’s generally neither practical nor possible. If you must whittle your time in Rome down to a few key sights, the first thing you need to do is decide what the purpose of your visit is. If you’re going there for food, museums, and romance, consult one of our other Roman travel guides. We have plenty! In this article, we’re looking at Rome’s historic attractions.

In a lot of ways, the history of the Roman civilization is the history of European civilization at large – they conquered so much of it that they had an influence almost everywhere. Roman history exists in both fact and fiction. Tales of Caesar’s glorious reign have been told on movie screens, in books, and even at online casino website such as Amigoslots.com. We’re not joking about the casinos – there’s literally an online slots game called ‘Caesar’s Glory’. It sits well with other Roman-themed games like ‘Call of the Colosseum’ and ‘Centurion’. It would appear that Ancient Rome is as popular with online slots developers as it is with tourists.

While the days of Caesar may be over, monuments and artifacts of his reign and the reigns of many more Holy Roman Emperors are still there to be seen in Rome – and these are the best of them! 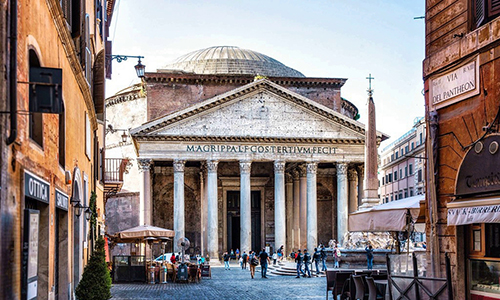 You could be forgiven for thinking that the Pantheon is a modern facsimile of the original building. The building, which is almost two thousand years old, simply appears to be too well preserved to be authentic. Much preservation work has been done on the structure, but that doesn’t fully explain why it’s stood the test of time. Most of its durability is, in fact, down to the fact that Ancient Roman concrete was, in many ways, superior to the kind we use today. If the Ancient Romans had used modern building materials to create their vast domed building, it would have turned to dust centuries ago. Amazingly, the Pantheon is still occasionally used today as a temple, just as it was all those years ago. Most of the time, though, it’s quiet and peaceful. 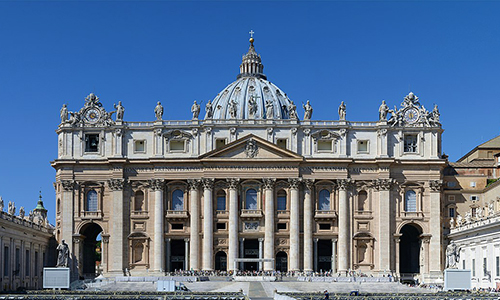 You will undoubtedly get more out of visiting Saint Peter’s Basilica if you’re a member of the Christian faith, but you don’t have to hold any religious beliefs at all to be impressed by the sheer scale and beauty of the building. To many who visit it, it’s the most awe-inspiring church in the world, and certainly the most breathtaking. Built in the 17th century, almost every detail you’ll find inside Saint Peter’s Basilica. Save for an extensive refurbishment project during the 1980s, virtually nothing has been retouched or replaced. It doesn’t cost anything to gain entry to the building, although you’ll have to pay a small fee if you want to head up into the dome. Because of crowding, it’s usually advisable to book yourself onto a guided tour of the site to ensure that you have access to everything you may want to see. 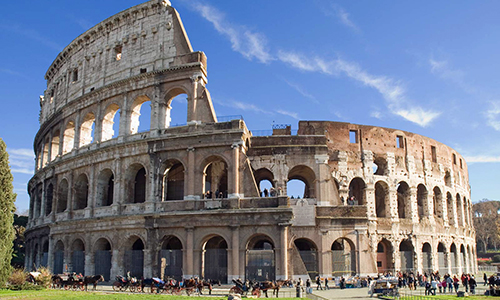 We mentioned the Colosseum in passing toward the beginning of this article when we referenced the fact that it’s been made the star of its own online slots game, but as good as that game is, it doesn’t compare to seeing the real thing with your own eyes! This is where everybody in Rome used to go on a Saturday night to be entertained, and that entertainment generally consisted of a gladiator being ripped into pieces by a lion, or speared through the chest by another gladiator. Say what you want about television these days, it’s still more civilized than that. You won’t find any such entertainment on within the Colosseum now thankfully – it’s become a form of entertainment in its own right. The monumental size of the arena has to be seen to be believed. If it were open today, local soccer clubs Roma and Lazio would struggle to fill it with all of their fans in there at the same time.

Mystery surrounds the creation of the Roman Forum. There are megalithic stone structures at the site that appear to have been dragged uphill and into position from a nearby quarry, and yet given their weight, it should have been impossible to move them when the Temple of Saturn was built. Ropes wouldn’t have done it, and men dragging or pushing the rock uphill is inconceivable. Go and see if you can solve the mystery yourself, and while you’re there, take in the scenery. There’s less at the site now than you’ll find at the Pantheon or the Colosseum, but for centuries this was the heart and soul of the entire Roman Empire and the focus of activity for its leaders. When you stand there, you’re standing in the footprints of leaders who once occupied the same spot when they issued edicts that affected – and in some cases ended – thousands of lives.

Like Saint Peter’s Basilica, you don’t need to be Christian to enjoy what the Vatican has to offer. Its art collection has to be seen to be believed, and then, of course, there’s the Sistine Chapel. The ceiling, as painted by Michelangelo, is a work of beauty befitting its revered status, and also in keeping with the grand sense of opulence that follows you everywhere you go in the Vatican. The Pope may not be there to see you, but the artifacts and personalities of every Pope who came before him are there on the walls and in the exhibits. For those of the Catholic faith, this will be a potentially once-in-a-lifetime religious experience.

Taking in all of those sites should give you plenty to do while you’re in Rome. You could do one a day if you’re there for a week, or try to cram them all into an action-packed weekend. There’s no right or wrong way to do it so long as you do it in the end!