Michaelian Military Band it was, or also abbreviated as MMB.

Music wasn’t really a passion when I was young. I dislike notes, music theories and going to Yamaha School for classes. Mum sent me to organ lessons when I was 5 but the interest wasn’t there. Eventually, I stopped.

Now I’m regretting because I can’t even play a song properly on the boards with white and black keys! *smacks myself on the forehead*

So I regained my music touch when I was in high school – St. Michael’s Instution, Ipoh. 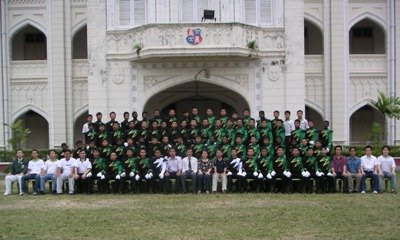 It was hard at the beginning, with all the marching drills and stamina trainings. The band was a pride to the school. Discipline was a strict requirement. Seniors were fierce like lions and I don’t even dare to talk to them. They will scold kau kau if we commit a mistake.

Even though I disliked the intensiveness of the trainings, my passion for the band didn’t end because of it. I committed myself – hoping to achieve success in the band.

I started off with the flute. Dad bought me one after 2 months of joining the band. I practiced a lot at home and managed to improve rapidly. However, I got bored of it and gotten myself another instrument in 2004. Again, dad bought me a Soprano Saxophone! So I kinda abandoned my old darling for a brand new darling! 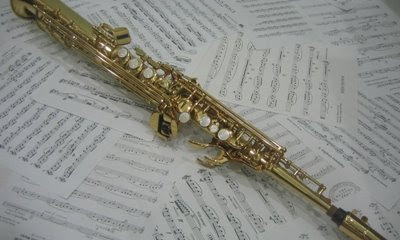 She’s so shiny and smooth in her golden dress. I love blowing her the most.

Anyway, during my 5 years in the school band, we had 3 concerts. The 1st one was in 2001 – Michealian Musical Extravaganza. I wasn’t in because I was still new. Second concert, Friendship Through Music in 2003. It was a combined concert with Kuen Cheng Girls’ High School from KL. This time I was one of the musicians. 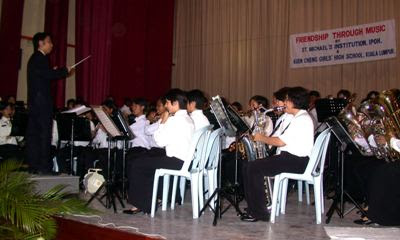 My last and final indoor performance in 2005 – Faith, Fraternity and Service. 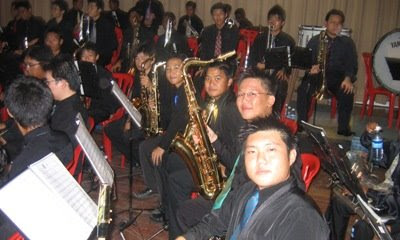 En route to the concerts, members are required to get money – lots and lots. The objective of raising cash is no other than to purchase new instruments. I’ve this bad experience back in 2003. This crazy alumni was so angry because we didn’t get enough money. Everyone had to run around the field several times while carrying a table.

Every year MMB is involved in the Perak State-Level Marching Competition. School bands are required to perform a 10~12 minutes formation for the competition. 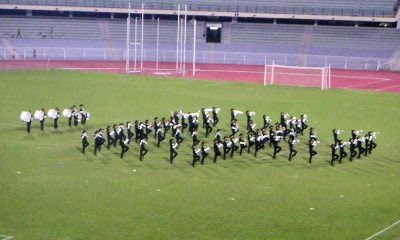 We’ve never achieved 1st in Perak before because there’s always Nan Hwa or AMC. So our best achievement, so far, is 2nd placing. 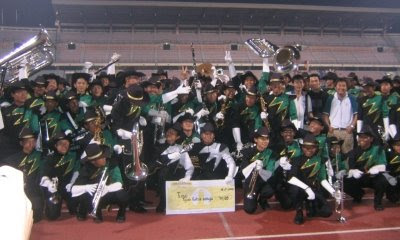 Participating in the marching competition is highly regarded by the school. Each year the members will practice regularly under the hot sun, get sun burns and exhaust ourselves. I was like charcoal during high school, seriously! 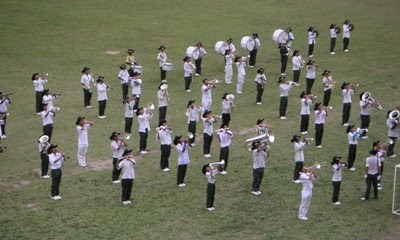 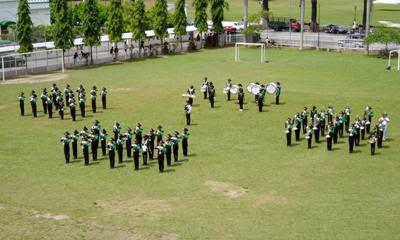 We also skipped classes frequently for practices and parents will say the usual you-should-be-studying phrases. Thankfully my parents were a great support. 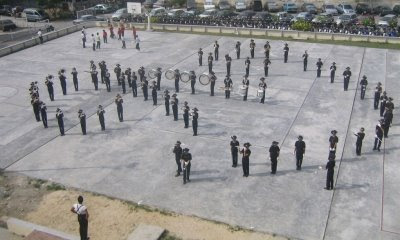 Being in the band took up most of my time. I always stayed back in school and go to school during holidays. All mainly because of the band.

I still remember my first Leadership Training Camp when I was in Form 1. The marching drills and stamina trainings were killing me. Marching sessions during the morning, afternoon and night – so frigging tiring! On the 2nd day, my dad brought me water bottles. Once I saw him, I broke down in tears; I couldn’t stand it anymore. Dad took me home and it was such a relief.

Well, we had trips too. The most memorable one was the Genting Performance Trip in November 2003. It was 3 days 2 nights free stay. I repeat: Free Accommodation and Food! All we had to do was just to perform at various places around First World Plaza. It was so fun! 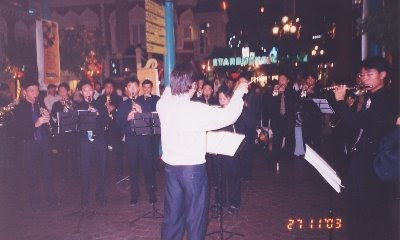 Another one was also in 2003. A training camp at Penang. 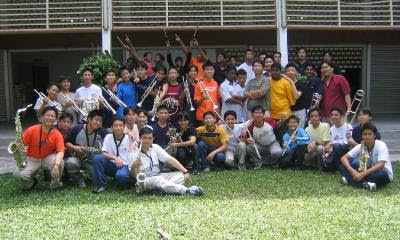 Besides that, we’re involved in the State-Level National Day celebration too. Marching during Merdeka is tiring because we’ve to march for 1 hour plus, but it’s fun. 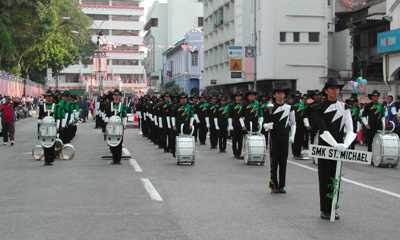 Also, performances during the school’s Sport’s Day. It’s very tiring too, especially during the class march pass. Imagine 60 classes and we have have to stand in the middle of the field and blow our instruments. 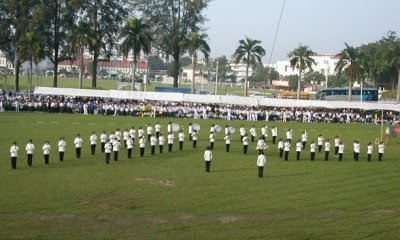 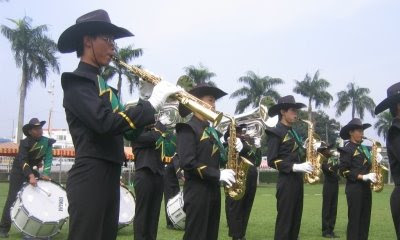 Oh yeah, regarding the uniform. When I joined the band, the uniform was a light beige formal attire – shown in the Sport’s Day 2003 picture. In 2004, we changed the uniform to a fancier style – in black and green. Some say we look like Power Rangers in the new outfit. Probably due to the star on the chest area.

Next, the Young Band Festival, an indoor competition, in 2003 at the Ipoh City Hall. We performed Alvamar Overture and Crouching Tiger, Hidden Dragon. Managed to achieve Gold Medal and I was so happy with that. 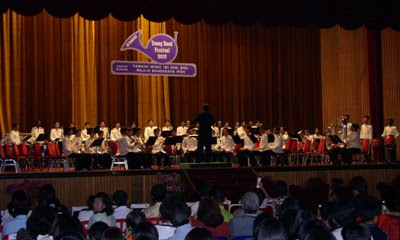 I was the librarian, the one who’s in-charge of music scores and stands, in 2002 and 2003 and then I was elected as the Treasurer in 2004. Yes, I’m a trustworthy person; that’s why I always get the money-related job. =P

And yeah, I became the Woodwind Section Leader in 2005. 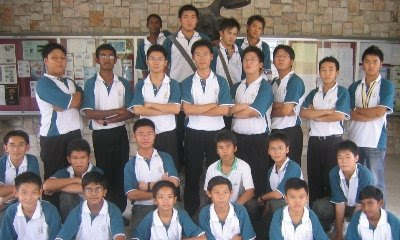 Time passes by so fast and it all came to an end. My final term ended in July 2005. More than 3 years ago. 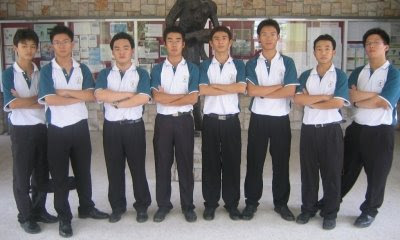 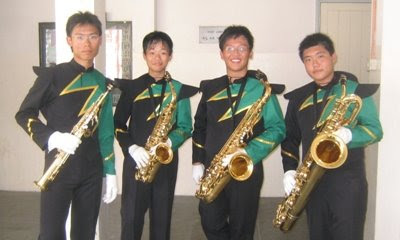 All the memories and experiences being together with the band. All the songs that I’ve played during performances, competitions and concerts. All the wonderful friendships that I’ve made. All the fun that I’ve enjoyed throughout my 5 years in the Michealian Military Band. All the pain and sufferings I’ve endured during trainings and practices.

With Pride Shall We March.

I miss my school band.

24 thoughts on “I Was In A Marching Band”