Being in the 12th INTIMA term was just amazing. Here, I just wanna recap on the journey throughout the whole term.

In August 2007 before our first semester of the term started, it was our 12th INTIMA EXCO Camp at Selesa Resort, Pahang. 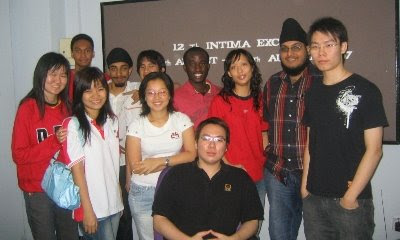 If you’re thinking of tents and making fire out of stones, you’re wrong. Basically, we had sessions to discuss our plans for the whole term. Nothing much, just meetings and meetings.

The following day, some of us went to Genting Highland as it’s not far away from our camp’s location. As usual, we went spinning up and down, cock-screwing and bla bla bla at the outdoor theme park. Had lunch and Clara did this with her fries. 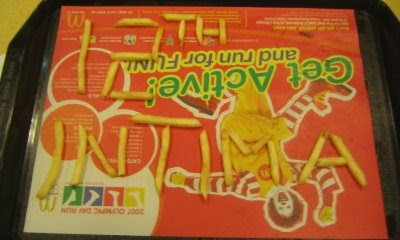 The first major event organized by the 12th INTIMA was the Leadership Training Camp (LTC) in September 2007 at Dusun Eco Resort, Pahang. Hafiz was the Organizing Chairperson. 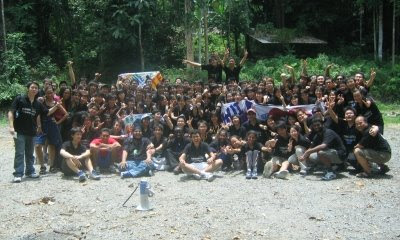 Committee members from clubs and societies, also known as affiliates, participated. The most fun part was the obstacle challenges. I can’t climb the bloody wall! We also had jungle tracking, games and motivational sessions. The 3 days 2 nights event was certainly enjoyable as we got to know everyone better. 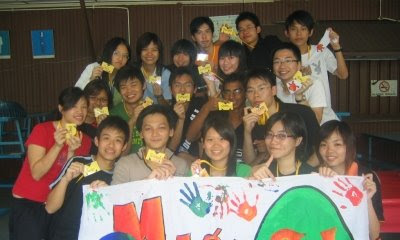 This was my group in LTC: Magical Madness or also known as M&M.

The following year (2008), our second semester of the term, we organized the Council Jamboree. It’s some sort like a gathering for the affiliates’ committee members. 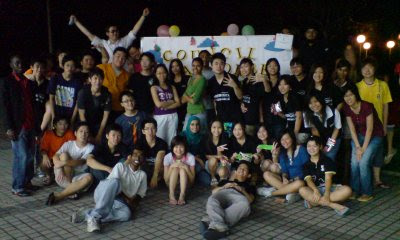 We had ‘makan’ session (yes free food!) and a treasure man hunt. I was one of the victim. =(

Next up, Sports Fiesta in March 2008. Jason Ng was the Organizing Chairperson.

I don’t think I have to explain much. Think of the recent Beijing Olympics. Well, just imagine a smaller (very very) version of it. 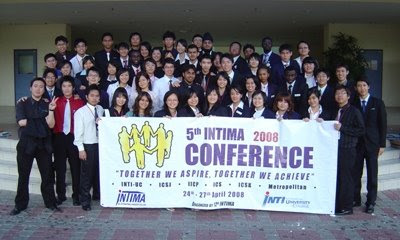 Well, it was fun getting to know the other lingerie sellers INTIMA members. We had conference sessions, team building games, trip to Jonker Street at Melaka, mini Frisbee tournament and yeah, not forgetting the yum cha sessions. See Mishal trying to give Young a big smooch. *gayness* Oh yeah, I was the Organizing Chairperson of this event. =)

In the final semester of our term, we organized INTI-UC’s most anticipated event: INTIBALL 2008. 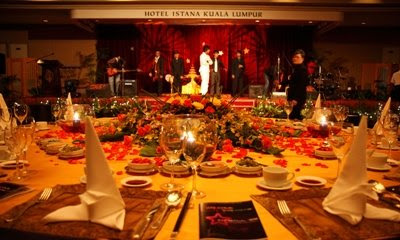 The venue was great and we got full house! Certainly an achievement! I think it was because of the free Maison passes. =P 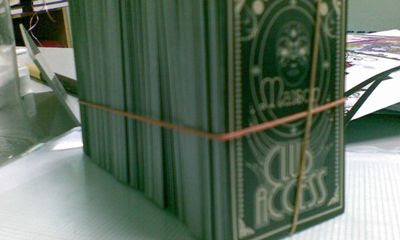 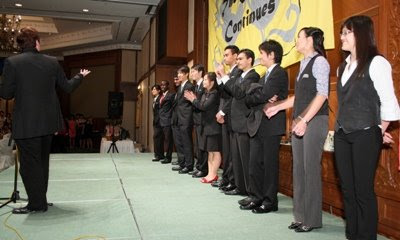 One year has finally passed and it was time for the whole new batch of student leaders, the 13th INTIMA, to take over. Gosh, I sound so old.

The event was great. Everything went smoothly and everyone enjoyed the night.

Besides all these events, we were facilitators during Orientation Weeks too. We had to sacrifice our holidays to go back to college and entertain the new students. 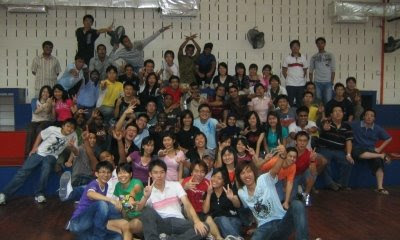 It was fun knowing the new students. Sometimes the students think we’re INTI staffs. But do we look like staffs? Yeah I wish we were. At least we’ll get some pay. 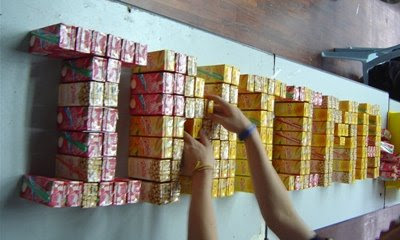 This was what we did when we’re too free during Orientation. We played with the drink boxes. Nice right? =)

We had photo shoot sessions too. Thanks to the Photography Club. 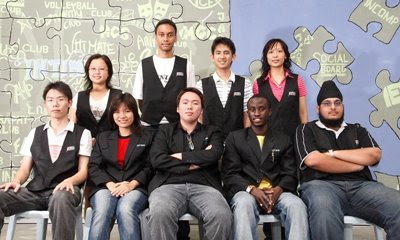 This photo was taken in the beginning of our term. When the 12th INTIMA term started, some EXCO resigned, some changed college. So there were just the 9 of us at first. Therefore, we recruited new EXCOs into our team. 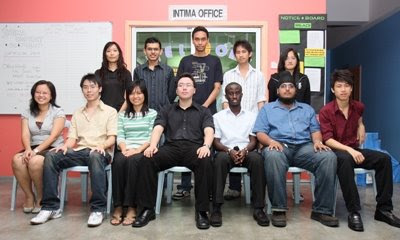 This is the team we had throughout most of the term. All 12 of us in the 12th INTIMA.

Here are the EXCOs of the 12th INTIMA.

The President. A guy with lots of ideas and suggestions. He handled most of the complaints by students and he managed it well. The mastermind of 12th INTIMA. He masters our minds with his special ‘knowledge’. Get it? Check out this Orang Cina blog.

Our Vice President of Administration and Services. She’s a nice person. Friendly. The STACT Club loves her. I don’t know why. Maybe she gave them free ‘service’. *cough* She’s after all the VP of Admin and Services.

Hafiz is a great guy to be with (I mean as a friend!). Our Vice President of Activities is always calm and cool. He likes to read about political issues and perhaps one day he might be the President of Nigeria. All the best! =)

This Secretary is always missing in action. But he’s our main guy for sponsorship and souvenirs. Well, if you want some Karrypuff, you’ll get it from him. An easy-going guy.

The youngest in the team. Waye Young is a passionate and dedicated Assistant Secretary. Helpful and outgoing. He loves to share his ‘knowledge’ too. Another mastermind, I assume. Check out his Tips For Being Young blog.

The most honest Treasurer. He’s handsome, charming, good looking and attractive. Very very very very committed and hardworking. Helpful and caring. A very innocent and good boy. Everybody loves him. And that’s me! =)

The Assistant Treasurer. She’s helpful and kind. Can be very strict when it comes to work but when it’s time to play, she’ll be one of the noisiest.

One of the Auditor in the team. A guy with lots of patience and tolerance. He’s a sporty person as he likes to play with balls and cocks, shuttlecocks I mean.

Mishal the Auditor. An enthusiastic and friendly person. One of a stomper from KL Stompers. Yeah, he stomps and smashes anything he sees in his way, especially the dustbins.

Our Public Relation Officer. Jason’s a wacky guy and likes to crap a lot. A fun guy to be with and he’s a caring person. He loves hwa hwa, which means flower flower (as shown in the picture).

Also a Public Relation Officer. Clara is another noisy girl. Loves to talk, talk and talk. A girl with huge dreams to reach the stars. She’s already graduated and now working in IBM. Visit her blog as she’s Reaching For The Stars.

Warning, don’t let this picture deceive you! Delia Lee, the last member recruited into the team as a Public Relation Officer, is also very noisy and loud. Sometime too hyperactive! She’s a great designer and certainly a very committed member. Her favourite phrase is What The Fu Fish!

Besides all that, we had some gay moments too. 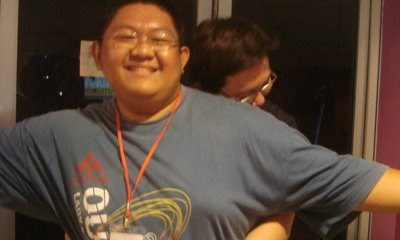 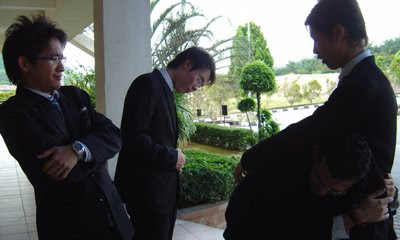 This explains why Mishal was giving Young a kiss in an earlier photo. Seems like Mishal is too in love with Young as he desperately hugs him. Young seems to be enjoying it too. He has the ‘Ahhhh~’ expression on his face. Just ignore me and Jason.

And NO I’m not looking at Mishal’s butt! I’m not a gay! Young will surely kill me for that! I was just looking at a flower on the floor. I’ve repeated this many times and it’s real: I’m an innocent good boy! *wink wink* 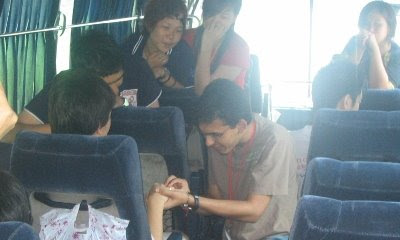 And finally, Mishal proposed to Young when we’re on the way back from the LTC. Young accepted and they live happily ever after.

Okay, that’s all for now.

Before I end, I just wanna thank the 12th INTIMA Executive Committees for the great times we had together.

I’ll miss all of you. Take care everyone.